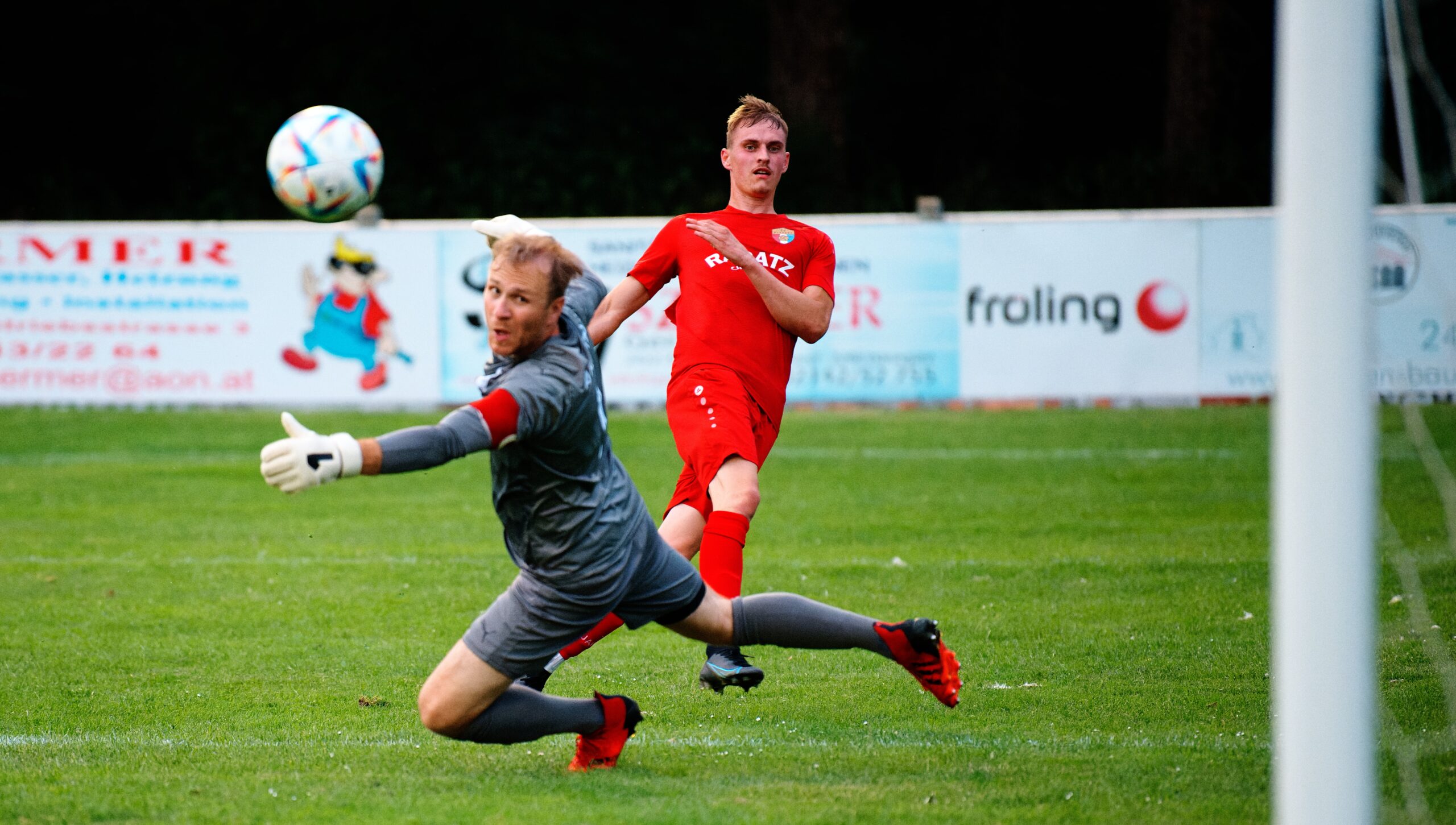 Going into game 24 of the 2021/2022 season, ASV Deutsch Jahrndorf was in second place with 41 points, eight points behind II Liga Nord leader Andau but only one point behind UFC Pama. Second place is the worst place to finish, as the team ends up without a championship crown and face promotion to Landesliga Burgenland, with much more distant travel and slim hopes of winning more than a few games against very stiff competition.

SC Kittsee on the other hand was sitting in twelfth spot, headed for relegation. A win was crucial. Ironically in the Covid shortened 2020/2021 season, SC Kittsee was first and ASV Deutsch Jahrndorf was last.1

The game ended up played mostly in mid-field, with neither team making many chances, nor showing any particular flair. It was if neither side particularly wanted to win until the last twenty-five minutes when SC Kittsee picked up the pace.

Michael Wernecker brings ball out for SC Kittsee, as referee Faruk Sevik runs with him.

SC Kittsee’s Patrick Pail goes on tip toe to control a high pass at the boundary in front of Kittsee fans.

SC Kittsee’s Patrick Pail runs around and under ASV Jahrndorf’s Alessandro Blazevic to drive in on net.

Patrick Pail delivers a good corner to Jozef Sombat. The game is starting to turn in SC Kittsee’s favour here as the ball is far more often in the ASV Jahrndorf end.

Kittsee star forward Jozef Sombat closes in on Pail’s corner cross as Mario Katzler tries to get back to stop him.

Jozef Sombat winds up to hammer the ball on the bounce, as Katzler continues to give chase.

An unimpeded Jozef Sombat whacks the ball with extended leg.

Jozef Sombat was not done yet. No one on ASV Jahrndorf could stop him this day. Between Matthias Graner and Alessandro Blazevic, Sombat easily controls a high ball coming his way.

After getting control of the ball, Sombat passes it quickly to Christoph Drobela who will adroitly slip his shot past keeper Michael Unger.

Christoph Drobela shows good touch here, catching keeper Michael Unger out of position and putting just enough force on the ball to slip it past Unger. In the background, Peter Majerčák arrives too late.

Christoph Drobela watches his shot take off towards the net.

ASV Jahrndorf keeper Michael Unger attempt to fall on the ball but it just slips past his outstretched hands.

Christoph Drobela watches the ball hit the back of the net as keeper Michael Unger lies defeated on the ground before him.

A vexed Michael Unger rises to collect the ball, post-goal.

Patrick Dietmann prepares to his throw in. Due to injury, Kittsee has not had enough Dietmann this season. Hopefully we’ll have him back at full strength next season, toughening Kittsee defence, sending dangerous long balls forward from the back.

Aleksa Slavkovic forearm punches Jozef Sombat in the air but there was no stopping Sombat today.

Sombat unleashes a precise shot from the left wing, past the outstretched mitt of Jahrndorf keeper Michael Unger.

Jahrndorf keeper Michael Unger must watch a second ball drift towards the net behind him. One could feel this goal coming based on Sombat’s excellent play today.

Jozef Sombat enjoys his own handiwork, convinced now that the shot is headed straight to the net.

Time is suspended for keeper Michael Unger. Curious that the bounce of a small round ball could hold such power over men.

The ball flies on, emotions flow.

ASV Jahrndorf keeper Michael Unger is not happy. If he were an English speaker, we’d be able to read his lips. That same word exists in German but is not generally used as an exclamative.

Strangely, it’s a sweet moment for the Kittsee season. There have not been enough games where the opposing keeper suffered despair or rage this year. The 2019-2020 season had many such games, with three or more goals marked regularly.

Referee Faruk Sevik has remarked Unger’s ill-temper and harsh words and drops a yellow card and a warning on him to make sure the end of the game does not spin out of control, with bad temper and wild fouls. Late game antics when a game is already decided can burden the losing team with pointless red cards and leave winning side crippled by senseless injuries. Better to nip it early.

This was the second last game of the season. Peter Majerčák, David Bodo, Ladislav Pavlovic, Juraj Tomasek, Patrik Majcher made a quick memory.

I asked them why they weren’t more upset about the loss. They explained that Deutsch Jahrndorf was third in the league after a very good season but there was no hope of obtaining first any more. Many players were injured and the team took the occasion to play players who needed more game time.

SC Kittsee did desperately need this win to avoid relegation so Deutsch Jahrndorf’s more relaxed attitude worked in our favour.