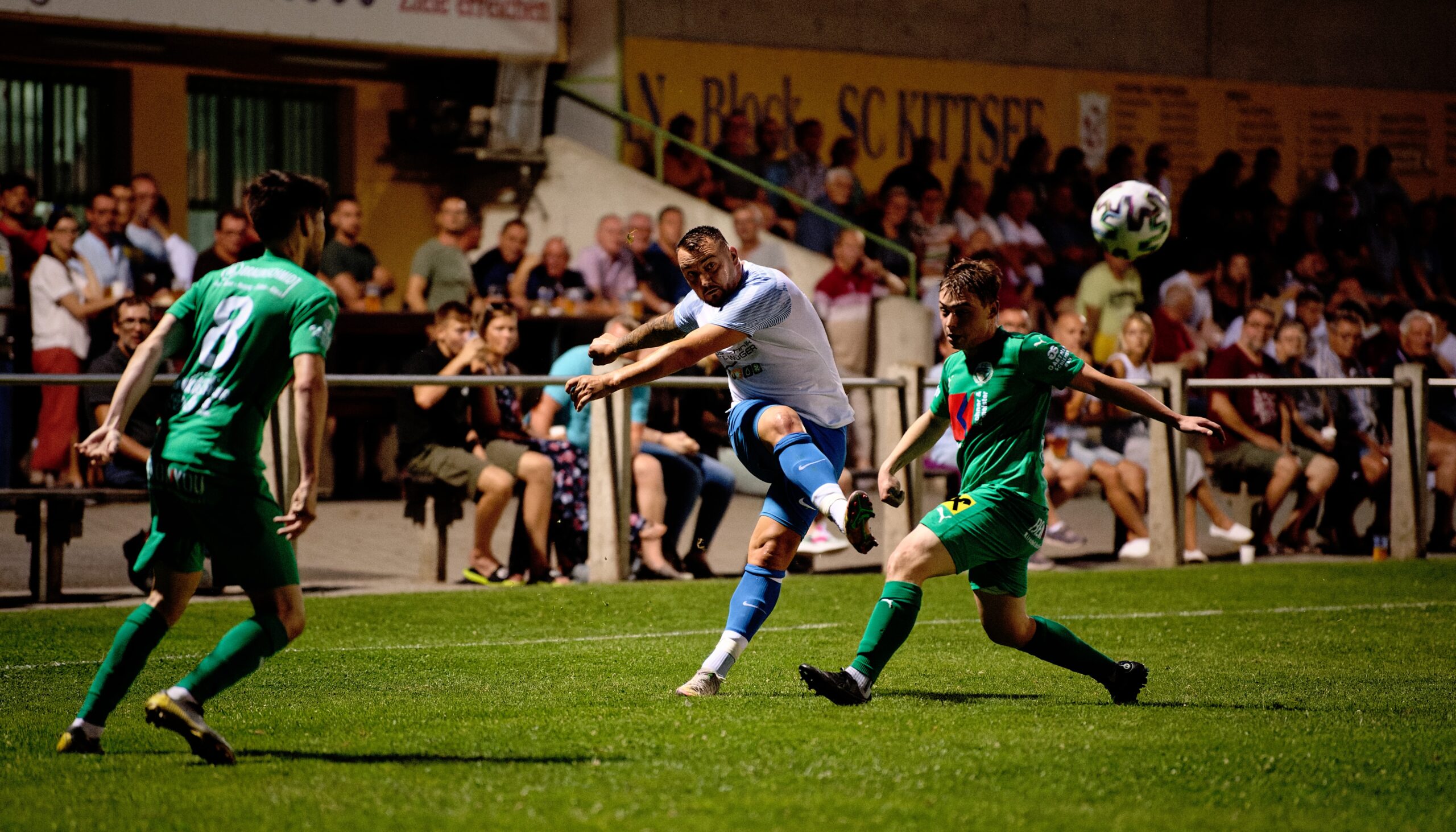 It was an important victory as the End of Summer Party followed the game.

The newcomers like Adam Bombicz, Mustafa Atik and Roman Tarek have added much to the team, while Jozef Sombat continues to shine. SC Kittsee had many good chances (as the photos show) and FC Monchof had few. Still the team kept us anxious to the end, by holding just a single goal lead.

Many Kittsee fans turned out for the early evening Mönchof game.

Former Gattendorf player Roman Tarek has now joined the righteous. Happier to see him making headers for Kittsee than Gattendorf

One of many Kittsee penalty shots in a choppy game.

This dog wanted the ball very badly and scared everyone near the ball when the ball went into the sideline.

The future looks bright for Kittsee. There’s a huge swell of young people in Kittsee, joining the youth program of the football club or cheering for Kittsee as in this case.

These guys have a secret noise machine to drive both photographers and opposing keepers mad.

They look harmless but they are not

Here is the contraption close-up. It’s loud, it’s insistent, it’s just the touch of a button.

The Kittsee junior fan club are very happy with their new contraption. Very dedicated to their club.

Stefan Josef Könnyü had a busy night in net. He did well to only let in one goal.

Sebastian Iacovino-Protiwa hopelessly tries to stop the big man, even grabbing him.

This a sequence and a good save by Sebastian Iacovino-Protiwa.

Another unnecessary and scrappy yellow card for Skerlan’s large collection. Kittsee have to find a way to avoid unnecessary cards if this team is to flourish.

Thomas Bastian insinuates himself without fouling.

The Monchof player is now off the ball.

Bastian controls the header just where he likes.

Everyone stayed to the end as 1. it was a tight match. Only a single goal lead, it should have been larger. 2. There was a big party afterwards.

Despite the card, Skerlan had another good game.

This is a sequence. Note the hard shorts pull from Atik.

Luisser is angry about the foul, the referee didn’t see the clever hand of Atik. Atik feigns innocence.

Luisser come close to getting a penalty while Atik says who me? The referee wants them to play on. FC Monchof is not happy with the new hard scrabbling SC Kittsee team. It’s understandable.

Another Kittsee newcomer, Said Ashraf Soltani came off the bench to good effect, taking advantage of his fresh legs.