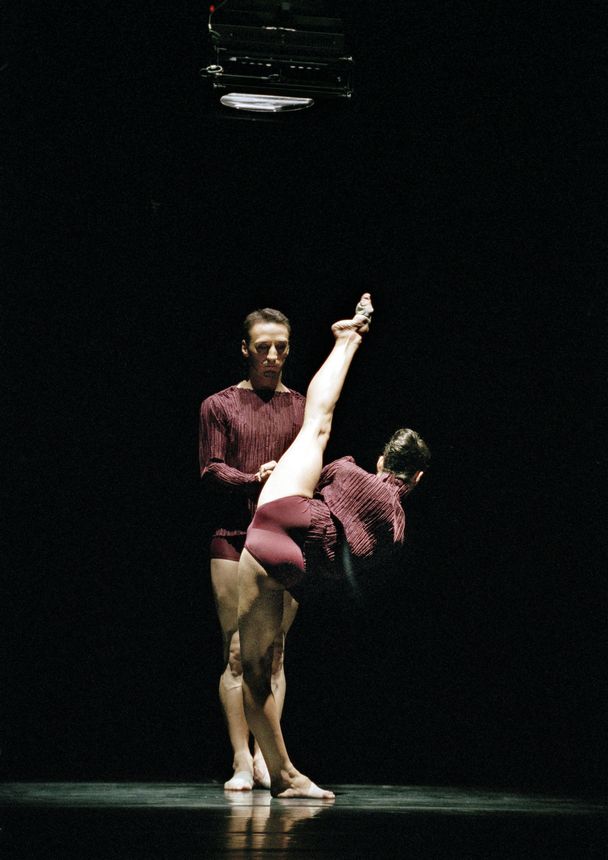 Six different performances from five choreographers in a single evening. This starts to reminds one of Choreolab. And in fact one of the Choreolab choreographers did manage to make the main stage. No great surprise that it is fellow Hungarian Andras Lukacs and protegé of ballet director Gyula Harangozo. 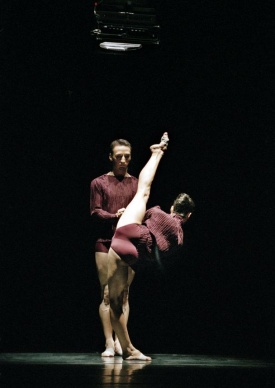 The good news is that Lukacs’ piece Duo while short was the most emotionally moving of the works danced that night. Duo is simplicity itself: rich purple costumes covering just the torso (Mónika Herworth) and a simple dark stage. The lighting was atmospheric but at the same time clear. We weren’t squinting in the dark.

The emotional character of the work had much to do with the music of Max Richter (from the Blue Notebooks) and with Rafaella Sant’Anna‘s performance. She is in the prime of young womanhood, a powerful dancer with graceful curves.

Her scissors in the air cut sharp like steel. Generally Sant’Anna carried her role with the class of a Paris Opéra étoile, though her footwork could sometimes be more accurate.

The Brazilian Sant’Anna has been in the Staatsoper a long time but despite her dramatic gifts and natural talents has been left to drift much of the time. Whenever she has had the opportunity to dance outside the corps she has always shone. It’s nice to see her have this chance on the main stage.

While emotionally cooler than Sant’Anna, her partner Masayu Kimoto supported her performance with élan. He was always in the right place and handled his lifts as though effortlessly. 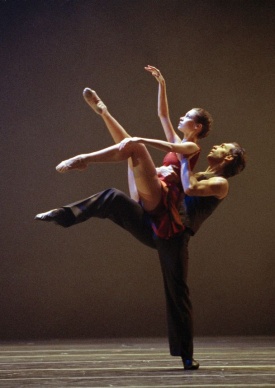 The opening piece of the evening Ederlezi from choreograph Myriam Naisy was quite the opposite. Shrill, bathetic music as if from a second rate Hollywood melodrama bathed the audience in bathos. Goran Gregovic must take the blame. The choreography did little to rescue the situation, despite some pretty lifts, particularly notable when Kirill Kourlaev held Irina Tsymbal horizontal over his head in an acrobatic pose. To their enormous credit, both handled this visually effortlessly.

Glow was a more ambitious work than either of the first two, with a cast of twelve dancers. Musically, choreographer Jorma Elo reaches directly for the sky, mixing a Mozart symphony and a Philip Glass’s concerto for piano and orchestra. The music was live making Glow a perfect fit for the Vienna Staatsoper, which may have the best ballet orchestra in the world. Unlike other ballet orchestras, the Staatsoper musicians have the opportunity to play a mixed repertoire and do not become as jaded and cynical in their playing.

The piano playing by Lucas Mais was superb: you could have closed the curtains. Anything that happened on stage was a bonus to the concert level playing.

Olga Esina showed up the entire cast with her long arms Dancers like Olga Esina are the reason to justify a trip to St Petersburg or Moscow to see the Marinsky or the Bolshoi. Kudos to Gyulo Harangozo for bringing Esina to Vienna and keeping her here. When you see her on the program, don’t miss the ballet. Kirill Kourlaev was the best of the men and partnered Esina adequately but for the moment the Staatsoper haven’t found a man to match Esina. The search goes on though: she will be dancing Swan Lake with four different partners in October and November. 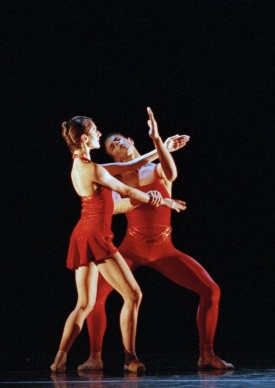 Of the other women in Glow – Stop, Ketevan Papava’s long arms nearly matched Esina, but her movements have a more deliberate and posed feel. I prefered Esina’s natural and effortless style.

Throughout Glow – Stop, the dancers mix and pair and mix again, like the river of life which brings people together and takes them apart.

At the end of Glow – Stop, the last dancer makes some small mechanical gesture with his arms and hand, as it the dancers are marionettes. We are just puppets moving frentically through life driven by our feelings.

Slingerland is a short duet by William Forsythe, originally staged on Stefanie Arndt who came to pass the role on to Olga Esina. Esina this time was paired with Eno Peci. Strangely, while both of these dancers are very talented, something did not work in this performance. Stefanie Arndt is a very angular and sharp dancer. Esina has a silky smoothness to almost all her gestures, even when stacatto. Her grace is out of place in the brittleness of Forsythe’s later works. Eno Peci is more at home in this idiom but he never seemed to hit full speed, nor was the any extraordinary chemistry between them. With all of the caveats above, Slingerland is the kind of work of which there should be more of in the Staatsoper repertoire and both Peci and Esina did sufficient justice to their roles. It’s just the trifecta Forsythe-Esina-Peci raised higher expectations on paper. The music didn’t help as it was a scratchy grinding bit of modern composition from Gavin Byers which irritates far more than it engages. 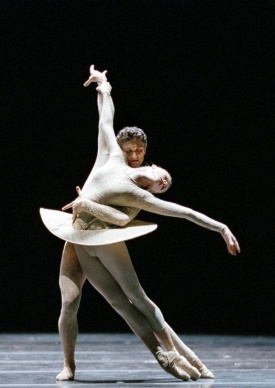 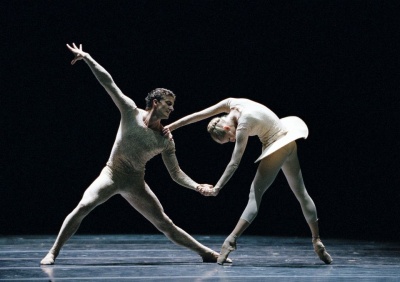 The end of the evening was given to Juri Kylian with two of his masterworks, Petite Mort and Six Dances.

Petite Mort involves swordplay and fake dresses and great swooping pieces of fabric which are carried across the stage, set to sweeping Mozart concertos (Nr. 21 and 23). A lot of Petite Mort’s effect is based on visual gags and surprises. I’ve seen it a few times, perhaps in Paris as well. To be frank, it was a disappointment for me last night. The men were very sloppy with their swordplay, not in sync. They didn’t seem to have any military discipline in their timing. The women didn’t move me either. Petite Mort did not seem to have the precision necessary or to be fully rehearsed. Had it been the first time I’d seen Petite Mort, perhaps I would have sufficiently delighted by the eye candy and visual surprises to forgive many of these faults. I’ve seen it danced better elsewhere. Staastsoper should be dancing work like Petit Mort, so I’d like to see them go back to the rehearsal room and get it right. 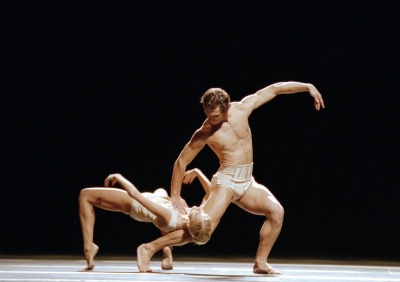 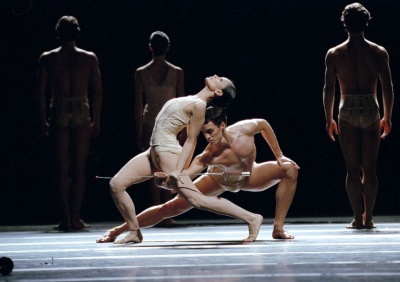 Six Dances is again the duo Kylian – Mozart, but this time in an overtly comic context with white pancake makeup on the dancers. Juri Kylian has a secret fascination with the word of slapstick silent comedy. He indulges this passion to the hilt with six dances. The dancers drove the staid audience to laughing out loud and put a smile on my own face. Under the white face I couldn’t tell who was who among Alice Firenze, Gabor Oberegger, Céline Weder, Marcin Dempc, Iliana Chivarova, Thomas Mayerhofer, Liudmila Trayan and Richard Szabó but nobody danced badly. The danseuse who opened up Six Dances was perhaps the funniest of all. In addition to his talent for creating beautiful and emotional movement, At the end of Six Dances beautiful soap bubbles float down from behind the stage. The dancers look up and are surprised. They share their surprise directly with the audience, looking us in the face and shrugging their shoulders as if we were there on stage with them. And interesting breaking of the third wall before the curtain closes on their strange mime world. 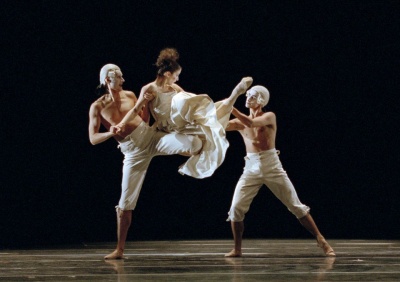 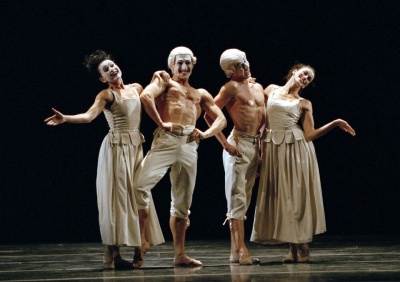 New World Dances is the closest I’ve seen Staatsoper come to one of those splendid Opera de Paris Palais Garnier evenings of contemporary choreography. Never mind that most of the creations here were made in 1980’s. There are a couple of newer pieces and this is a huge step in the right direction. There should be one or two of these evenings made every season. Costume ballets and classics are fine but to breathe a major ballet company needs this work too. I’d like to see newer works and less name choreographers but perhaps to sell contemporary choreography to the Viennese audience, it’s a necessary evil.