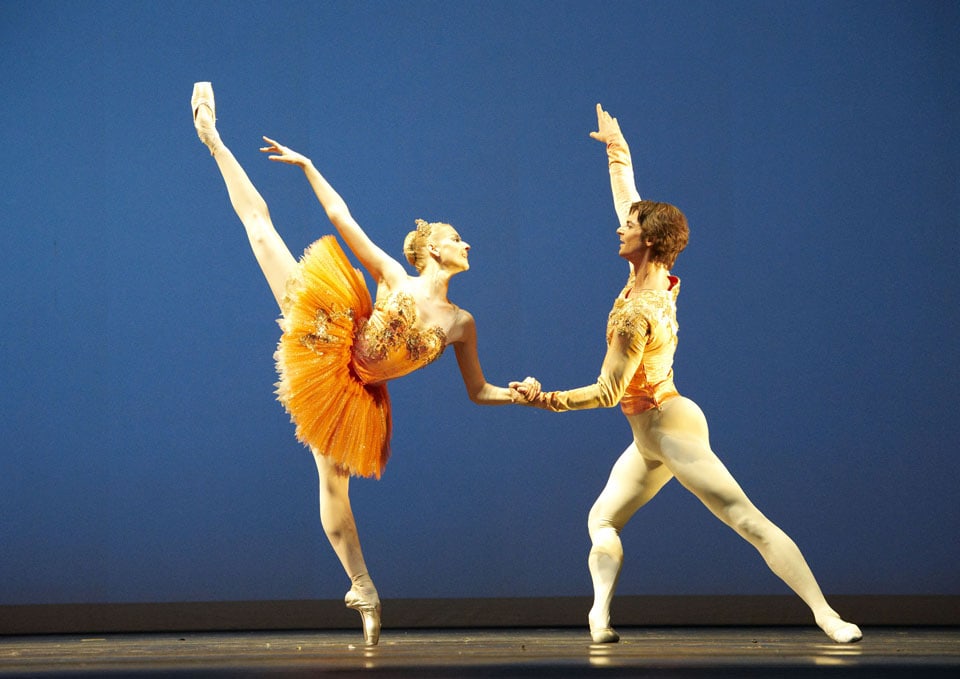 When Manuel Legris retired as an étoile at Paris Opera last year, he immediately took up residence in Vienna as the artistic director of the Vienna State Opera ballet. While the Staatsoper Ballet outside the Renato Zanella years has always been a very classical company, the Paris Opera has always danced both modern works and classical works with equal aplomb – and many would argue, the finest mixed repertoire company in the world.

With his first rate credentials there as a dancer, hopes are high that Legris will be as fine a director in Vienna. Until last year, the preceding artistic director Gyula Harangozo had been building a very good classical company with a strong Russian accent in Vienna.

Curiously Legris has kept most of the Harangozo dancers while shuffling around the designations with a new étoile designation to which only two ballerinas have been elevated, Olga Esina and Maria Yakovleva and two dancers, Vladmir Shishov and Roman Lazik. The dance world is dying to know what he has made of them in his first premiere Jewels of the New World.

Quite sensibly, Legris has brought the repertoire of the Paris Opera with him. In Jewels of the New World, we saw Balanchine, Twyla Tharp, William Forsythe and more Balanchine. All of these choreographers and all of these works have been staples of the Paris Opera repertoire since at least the eighties. No brave experimentation here, but it is high time these modern classic names returned to Vienna’s main stage.

The theme of the evening was New World as Twyla Tharp and William Forsythe are both American born, while George Balanchine after stints at the Marinsky Theater and Serghei Diaghilev’s Ballets Russes founded the finest and most influential dance company in the United States, New York City Ballet.

With the magic of Legris can the Vienna State Opera compete with the Paris Opera on the same repertoire? The short answer is no. The longer answer is not yet. Despite some exceptional highlights to the evening from Elisabeth Golibina and Kirill Kourlaev, Nina Polakává and Maria Yakovleva, the Vienna company does not yet have the same depth or consistency of schooling as Paris. Comparative inconsistency is not unexpected as Paris has its own school supplying most of the Opera dancers while Vienna’s ballet school has offered just a half dozen dancers good enough to last at the state opera in the last ten years.

Theme and Variations opened the evening on the Tschaikovsky’s Orchentral Suite 3 in G Major and with costumes from Christian Lacroix. The look was ornamental and bombastic, Parisian frippery at its best. To carry off as flamboyant a piece, the corps-de-ballet has to be perfect and the soloists should be spectacular. Alas night they were not. The corps-de-ballet was constantly out of sync, while Vladimir Shishov and Olga Esina sometimes seemed uncertain and on several occasions made flagrant mistakes. With a little bit more rehearsal, both they and the corps should be able to make amends. Apparently Esina and Shishov indeed had little time to rehearse as until another dancer’s illness Shishov was to partner Nina Polakova in the second cast. 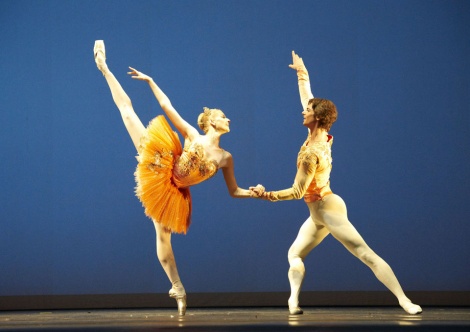 The two do suit Theme and Variations as danseurs nobles. Esina is a classic Marinsky ballerina with long arms and legs and neck. Shishov has grown into manhood in his time in Vienna and appears to be working harder at either the gym or the rehearsal room. Although the women looked quite good, the men of the corps-de-ballet looked more like boys than the jaded rakes of the Paris Opera, to the detriment of Balanchine’s work. 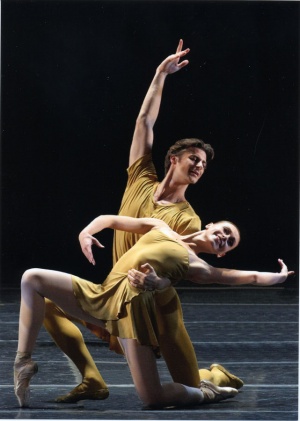 Variations on a Theme by Haydn
Vladimir Shishov Elisabeth Golibina

was an excellent choice to follow Balanchine. The further development of Balanchine’s art in Tharp’s work is crystal clear in apposition. Brahms’ music is exceptionally moving and a welcome relief from the rather strident Tchaikovsky suite. The dark sand simple costumes and lyric variations of Tharp’s piece allowed the dance to shine through.

The cast was very strong including many of the very best dancers of the State Opera ballet. Long limbed Georgian Ketevan Papava acquitted herself well while Nina Polakova is quietly on her way to becoming an étoile in the firm hands of Kirill Kourlaev. These two were certainly the best pair of the night. Polakova’s movements were fragile and graceful, each infused with that strange tragic intensity that is hers alone. Kourlaev was both strong and suitably discreet, not overwhelming either his partner or the piece. Hopefully we will continue to see them together.

Shishov returned immediately to the stage to partner Elisabeth Golibina who was absolutely brilliant. With all her skills in classic ballet, Golibina showed an astounding flexibility and energy in Tharp’s more modern steps. She looked like she stepped out of the original creation or the Paris Opera. Stunning. Shishov continued to show better form than past years as a manly and certain partner, strong enough to handle Golibina’s tall form.

The normally radiant Maria Yakovleva was uncharacteristically dull in the reliable if prosaic hands of Roman Lazik. He seems both too tall and too diffident to suit Yakovleva as a partner. Happily enough, it turned out Yakoleva was saving herself for later that evening.

Alas, after the intermission the premiere here of Forsythe’s exciting piece The Vertiginous Thrill of Exactitude was not as successful. The Paris Opera performances are many levels above what happened in Vienna. What went wrong? 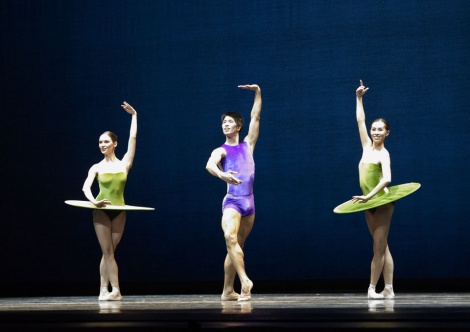 The angular geometric costumes fit Ludmila Konovalova’s attractive figure badly, while the ballerina had neither the speed nor the sharp angles to carry the role. Konovalova spared no effort to try to entrap Forsythe’s steps but here she was miscast for her major debut on the Staatsoper stage: I anticipate excellent performances from her in other roles. We will see Elisabeth Golibina dance this role next week and wish her more success.

The other two women Franziska Wallner-Hollinek and Kiyoka Hashimoto were unremarkable but adequate. After a slow start Masayu Kimoto and Denys Chervychko caught fire in the men’s solos. Chervychko has an unpleasant tendency to try to draw the audience’s attention to himself and not to the piece or his partner. One day one might hope that he learns that the artist is subservient to the art and not art to the artist.

Legris chose well to save Balanchine’s Rubies for the finale. Karinska’s original costumes from 1967 were magnificent: light gleaming in all directions from the jewels. After seeing Karinska’s spectacular raiment, I don’t understand why so often new costumes are created for Balanchine’s Jewels.

Ketevan Papava was at her best as the first ruby, her long limber legs and arms nearly endless. Despite her Circassian origins in Georgia, Papava is unusually cold on stage. Despite almost perfect steps, she leaves herself too far out of the equation. She is an ice princess: one hopes one day she will warm. With Plissetskaian passion, Papava would be a dancer to reckoned with internationally. 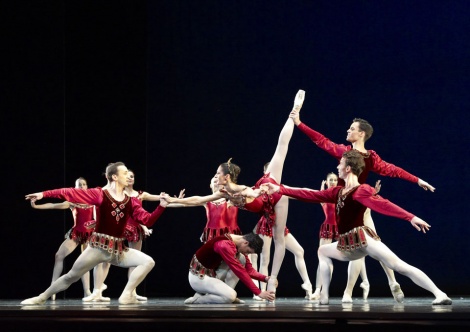 On the other hand Maria Yakovleva hit the stage like a shining hurricane. None of the earlier languour or indifference of her performance in Variations to be seen. She leapt, she smiled, she piroutted as if she were born to be a jewel. At the end of the piece, her appearance brought the most vigorous applause of the night. Her partner Mihail Sosnovichi was a fine pairing but Sosnovichi was simply unable to keep up with Yakovleva. She showed up the entire stage and brought the house down with roaring applause at the end. 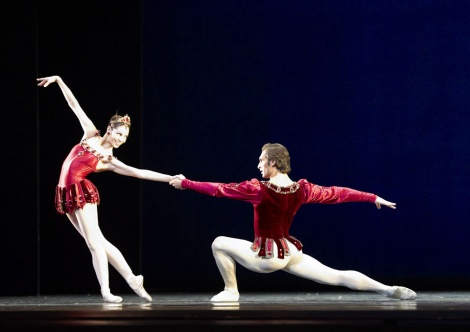 All in all, a debut of which Monsieur Legris may be very proud. Many fine performances, a nice shift in the repertoire. Legris carefully chose some of the best teachers of these ballets to bring to Vienna. When William Forsythe couldn’t make it, Legris sent an expedition of the first cast to Frankfurt for a week. Clearly Legris will spare no expense or energy to put first-rate dance on our stage. The talk among the dancers is of a positive and encouraging atmosphere. The rest of the season continues to offer good new works to the Vienna State Opera with an original premiere based on Marie Antoinette’s life choreographed by Patrick de Bana in November. Premieres of works from Béjart, Jerome Robbins, Elo, Kylian still to come in the New Year.