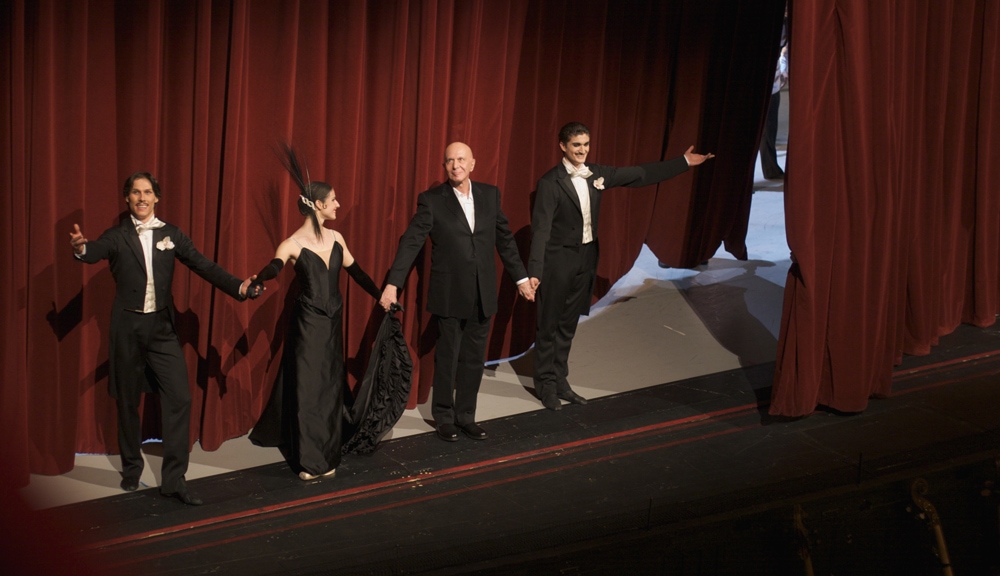 In what seems to be an endless tour at Wiener Staatsoper of masterworks from great choreographers of the 1970’s, the latest premiere brings us Die Fledermaus, a.k.a. La Chauve-souris from maestro Roland Petit. 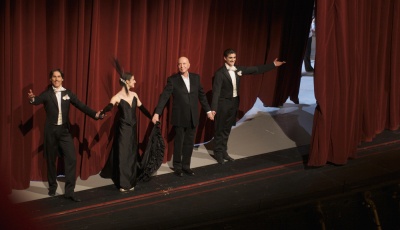 La Chauve-souris is a particularly amusing example of how cultural cross-pollination can go full circle.

Mr. Petit’s inspiration for La Chauve-souris was an operetta by Johann Straus (Jr.), the famous waltz king. Die Fledermaus is part of Austrian folklore, televised every year at New Year’s on the national television station. Mr. Petit transposed Die Fledermaus’s scenes at the ball to Paris’s own Maxim’s. This production is the first visit of the ballet version of Die Fledermaus to Vienna.

At the heart, the story remains the same. A man with a beautiful wife has grown too accustomed to her, as men do, even bored. Johann’s wife Bella solicits her husband’s attention to no avail. He prefers even the newspaper to her company. In evening however Johann has other plans. He likes to slip out to Maxim’s to dance, flirt and even seduce. 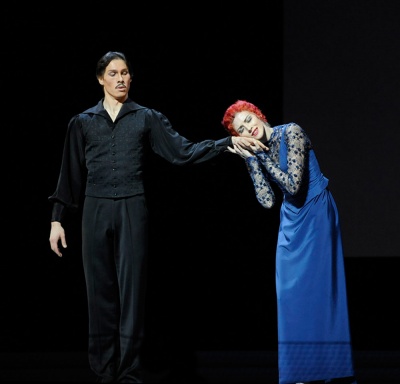 While Johann is ignoring her, Bella – as attractive women, married or not, always do – has an admirer. In this case, the admirer is their children’s tutor Ulrich. 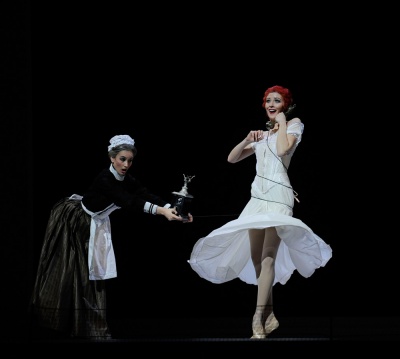 When Johann has disappeared to Maxim’s, Bella calls Ulrich to the house. Ulrich sees his chance and goes in for the kill, hoping to seduce Bella the same evening. But for the moment, Bella cannot bring herself to betray her husband. Ulrich has a backup plan – to disguise Bella and take her out to Maxim’s where she can see Johann’s womanizing for herself. 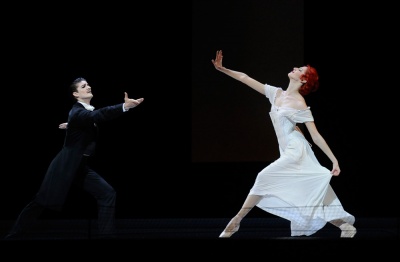 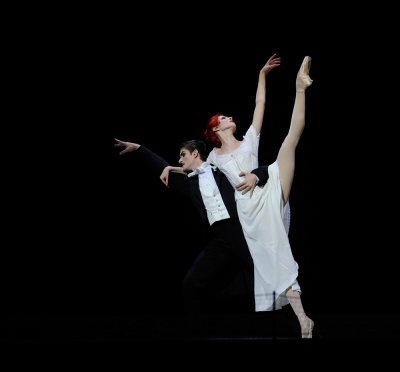 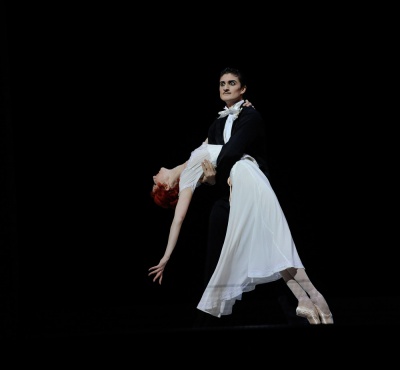 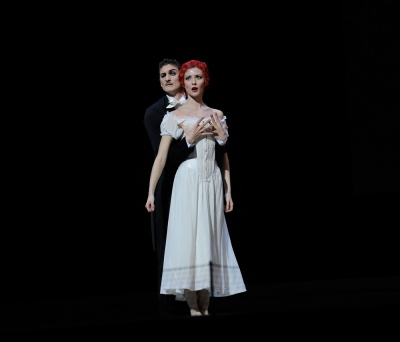 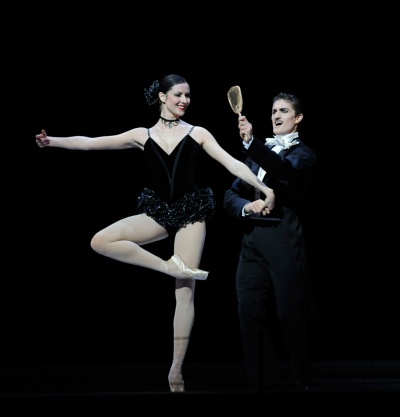 Ulrich’s hidden agenda is that when Bella has seen Johann’s infidelity, she will be easy prey for Ulrich himself.

Curiously when Ulrich and Bella reach Maxim’s, Bella makes a tremendous impression on all the men there, including her own husband. Johann leaves all the other delicious ladies and courts his own Bella. But Johann doesn’t realise the gorgeous woman he is wooing is his own wife. Shakespeare often enough used the same disguised lover trope in his plays to good effect and it works well here as well.

When Ulrich sees his plan falling apart, he makes arrangements for Johann to be arrested and put in jail.

Johann has these strange bat wings with which he flies away the first night. When he is in jail, Bella drops by with the magistrate and seduces him into allowing her into Johann’s cell. When in the jail, Ulrich brings Bella a giant pair of scissors and Bella cuts away Johann’s bat wings. After his release from jail, Johann is grounded at home.

Kirill Kourlaev is marvellously severe in his portrayal of Johann at home. His interpretation of Karenin early in his career prepared him well for portraying an older man. As Johann out and about on the town, Kirill seems somewhat less inebriated as he might be. Strangely, during his leaps before the other couples at Maxim’s, Kourlaev often seems to pull his jumps to half height, with the exception of one leg crossing leap repeated just twice. Why we don’t see the bravura leaps of a dancer like Nureyev, Liepa or Baryshnikov here is unclear… The context seems ideal for full on showmanship, as Johann is showing his strength and virility off to the younger men and the woman. 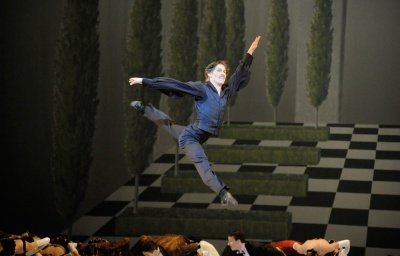 As Bella, Olga Esina does very well in the early going interpreting the neglected wife’s frustration. One can feel her need for tenderness and even a passionate desire for lovemaking with her husband or even any one else. One thinks for a few moments that she will allow the insistent Ulrich to bed her so palpable is her desire.

In her small gestures, one feels a real suffering which goes beyond easy caricature.

When she transforms into the beautiful mystery woman, she becomes another woman. No thought of fidelity or modesty. Bella is just brazen heat and vain beauty, the kind of woman for which many men are silly enough to kill themselves. Her dancing here blazes.

In some ways, Esina might even go too far. One cannot recognise the original Bella. I feel that there should be some consistent line of character.

Her transformation from demure wife to flashy femme fatale recalls Odetta-Odile. Ulrich plays a downmarket Rotbart to a tee, summoning Bella away from Johann, as Johann is surrounded by the other couples, like swans keeping him away from Bella. A wonderful wink from Mr. Petit who had attained the ironic age when he created La Chauve-souris at 55 years.

The eating scene at the beginning is awfully silly with the children and the adults licking their plates. I’m not sure if this catering to the lowest common denominator helps or not.

It’s amazing how quickly an attractive woman can consider betraying her husband. There is always a baying pack at her heels so it’s not complicated. Bella is filled with remorse before following through on it, thereby retaining the audience’s sympathy. The strutting shallow steps of the seducer suit Eno Peci very well. He was in fine form in these scenes.

Eno Peci as Ulrich is excellent in caricature – but his motivations and character seem to jump around from scene to scene. Does he or does he not want to seduce Bella? Is or is he not a friend of the family? Mr. Peci’s inconsistency of character is not a major obstacle to the enjoyment of the ballet or the progress of Die Fledermaus but I think Mr. Peci’s inconsistent motivation here occasionally confuses Olga Esina which does know Die Fledermaus a little bit off track in the second half.

The dynamic between Ms. Yesina and Mr. Koulaev, as neglected wife and neglecting husband, while caricatural retains truth and is extremely engaging. The silly red wig that the character of Bella must wear at the beginning and end is poorly, made, unconvincing and absurd. Any husband whose wife paraded around in such a hair piece would be well-justified in neglecting her.

Elsewhere dancing in the second half pays exquisite hommage to ballet’s classics. Early on in the Maxim’s scene, we face a Hungarian dance with six women led by Denys Chervchenko. Of course this reminds us of the dances of the foreign suitors in Sleeping Beauty or Swan Lake. Later Eno Peci steps in as an unwelcome rival to Chervchenko and they fight over the six maidens. The whole farce well enough performed but seems to take us a long way away from the main story.

A later jab at classical ballet is more successful. Ulrich orders Bella to abandon the supplicating Johann in the middle of a pas de deux, as Rotbert in Swan Lakes orders Odile to abandon Prince Siegfried. Siegriend is subsequently encircled by Swans and unable to reach Odile again. Here in Die Fledermaus, Johann is encircled by the Maxim’s dancers and unable to reach the bewitching Bella. 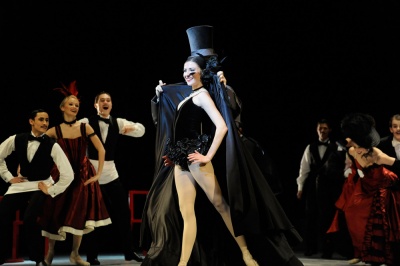 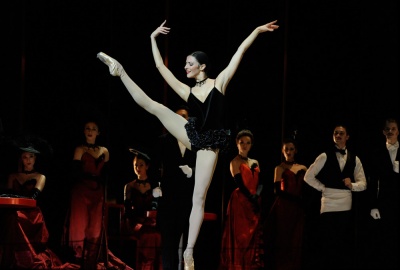 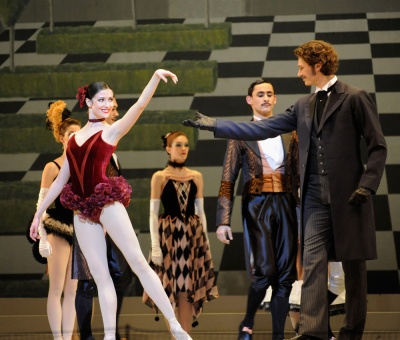 Ms. Esina is sumptuous in her both her black and bordeaux boudoir disguises.

As Johann flies away at one point, heartbroken, his flapping arms reminds us rather pathetically of The Dying Swan.

When Johann is carted off to jail, Bella and he have a fantasy dance where she is in a white bodysuit which either represents nakedness or angelic purity. In either case, the double and triple sets of pantylines and costume stitching take much away from the moment. That particular costume needs a 2009 reworking to be a seamless whole.

This particular dance reminds one of the last dance of Romeo and Juliet in Prokofiev’s ballet. This particular pas-de-deux felt a bit rushed and cold. It could use both more rehearsing and more feeling. Or perhaps the dancers were simply tired after what is quite a strenuous romp on opening night.

These are just a few of the more obvious references to the classics which Mr. Petit has cleverly worked in to Die Fledermaus.

By the end of the ballet one is delighted to see Bella clip Johann’s wings – is marriage always like this? – and to see the pair of them happily at home reconciled and happily sharing the same bed. 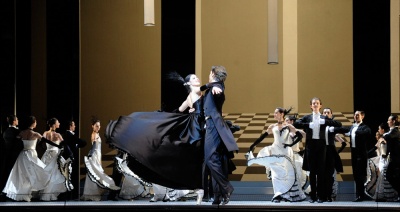 Rafaella Sant’Anna is delightful as the maid, particularly when mimicing her mistress. Maids seem to have become Ms. Sant’Anna’s stock and trade since her success in Patricia Sollak’s Different Creatures at Choreolab 06. As a one-time potential danseuse noble – Ms. Sant’Anna is as tall and graceful as any ballerina in the Staatsoper – it must be a little strange. But she is good at it, and there is more work for comic actresses in their thirties as for retired ballerinas so perhaps she is on to a good thing. 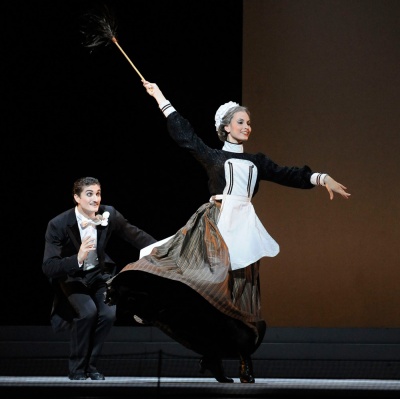 In the Maxim’s scenes, the costumes of the corps-de-ballet are delightful. They are in dominos or bordeaux or red, like little chocolates. Apparently these are the original costumes, by Luisa Spinatelli. Amazing how little they have dated. 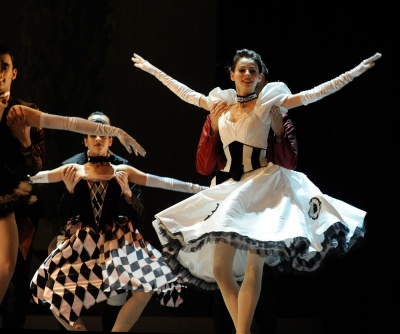 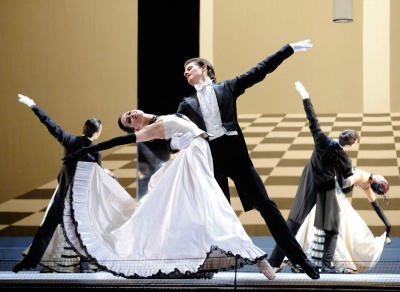 The Staatsoper orchestra is likely the best in the world to play Die Fledermaus. The music is Johann Strauss, (Douglas) Gamley rearranged. For the music alone (if you can abide Strauss, not all can), even with your eyes bandaged this performance would be well worth the excursion. Conductor Michael Halász was in fine form, instilling real enthusiasm into his players.

Die Fledermaus is a very good fit for Vienna and for the young and attractive but a little bit superficial current Staatsoper ballet company. An inspired choice by Director Harangozó. This is really an evening everyone who likes ballet or even theatre can enjoy. By turns, Die Fledermaus is high spirited, moving and funny.

Amazingly enough, the old gent – Mr. Petit is now 85 – turned up personally for the occasion. After the ballet, Mr. Petit declared that out of all his work (Le Jeune Homme et La Mort, Carmen the most famous), La Chauve-souris is closest to his heart. “Having seen this wonderful production in Vienna has redoubled my desire to take Fledermaus to stages around the world.”

Mr. Petit seems to be making good on this intention as the National Theatre Ballet in Tokyo acquired such a production in 2005 and Mr. Petit is taking Die Fledermaus somewhere else in a month or two.

Photo credits: All the wonderful performance photos are by Max Moser. All copyright for these photos resides with Max. They may not be reprinted without his permission. See more Max Moser’s Vienna cultural photos here.