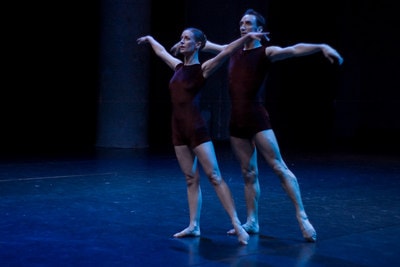 Choreolab 06 opened with a piece from András Lukács, who regular readers might remember from the evening of Nicht nur Mozart where he offered Tabula Rasa, a group piece with a touching duet for men.

Connection was exactly the opposite. A duet for a man and a woman. András Lukács chose his lead dancer Rebecca Gladstone of the Volksoper who was outstanding in Tabula Rasa to dance the duet together with himself.

This time I didn’t care for the black velvet jumpsuits the pair were wearing. The square cut on their legs and bare armholes made me think more of boxers workout clothes or half-made bunny costumes. 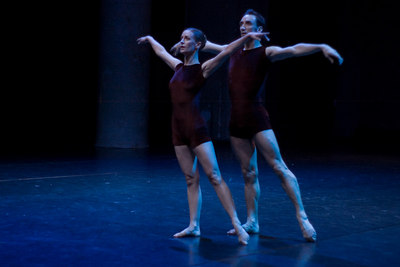 The costumes didn’t work with the habitual elegance of András Lukács’s choreography.

While both danced well enough, I didn’t feel the connection of the title between the two lead performers. Much of the time I kept finding myself looking for the large group movements of Tabula Rasa. It seemed as if the corps-de-ballet just didn’t show up and the two leads were left on their own to rehearse. 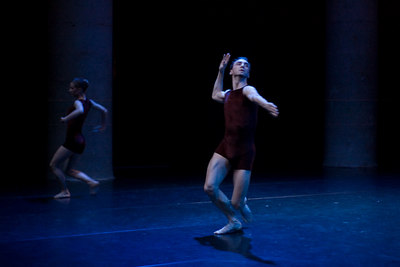 And a lot of the bravura moves and lifts ended up looking more like pair figure skating rather than ballet. This problem probably had a lot to do with the music selection – typical overblown Lukács film score stuff: Astor Piazzolla, this time.

A quick search in Google for Piazzolla and figure skating instantly reveals the problem: Piazzolla is one of the favorite all-time composers of pairs figure skaters. 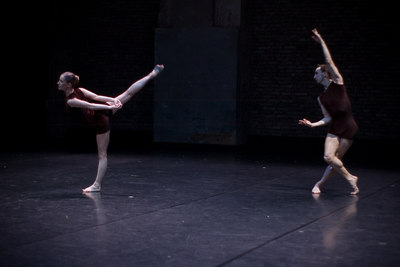 Connection might have come off better if Lukács had just called it Skaters and treated it all with a huge dose of irony.

András Lukács was more successful in his second piece of the evening which came much later, a group composition called A Letter to Marth Graham.

The piece of itself was quite lovely. It is seven female dancers in floor length violet gowns under quite dim lights, who dance patterns of movement as seven, as three, as two, as seven again. 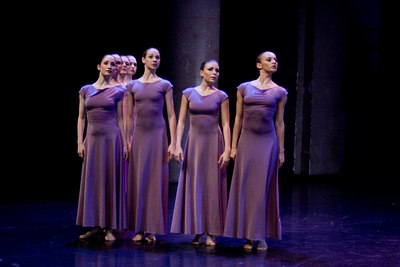 Due to Michael Nyman’s overbearing music, what could have been subtle and sensitive became one of those cliché ballet moments – what someone who doesn’t know dance would expect ballet to be like. Sweeping artificial orchestral sounds and gaunt misses pretentiously posing.

If one could ignore the music, the piece might have been a delight.

For the first year, the ballet school (Ballettschule der Wiener Staatsoper) took part in Choreolab. I’m not sure that’s a good thing. These young dancers looked inadequate beside the company. I’m sure the level was much higher at the Bolshoi Ballet School and Opéra de Paris school recitals I’ve seen. I’m not sure what is going on with the Vienna ballet school – the professors seem very good – but the overall level is ho-hum. The vast majority of the girls graduating do not go on to any kind of a career in dance. 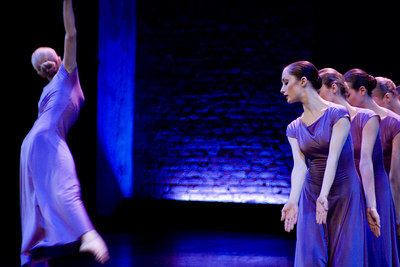 In any case, these young ladies should not be dancing as a group in company evenings, as they are just not ready. It takes the whole level of the proceedings down to the level of a recital, rather than a serious presentation of young choreographers’ work.

I would like to single three of them out for special mention however. The one who danced best was Romina Kotodziej. She was smooth, coherent and accurate. The one who performed best, always dancing as if she really meant it was Agnes Schmetterer. Miss Schmetterer brought great focus and intensity to her performance at all times, although she needs to continue work on her accuracy. She is a tall girl so she is probably still just catching up with her body. Finally, Emma Harrington, who was one of the two leads, has such a beautiful cameo appearance that she could just come and sit for a painting and it would be a pleasure to the eyes to rest upon her timeless features. Emma Harrington is Australian – another instance of my theory that whenever one finds a girl or a woman of breathtaking beauty here in Vienna she is inevitably from somewhere else. 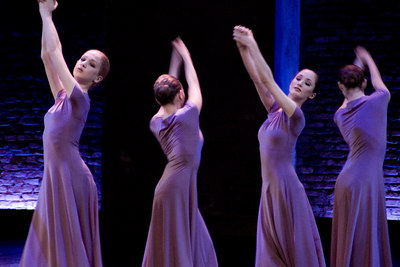 Great beauty is both a blessing and a curse. May it bring Miss Harrington much more of the former. But she’ll have to keep working on her dancing and her acting if she is to make use of it as a performer.

Mr. Lukács is astonishingly prolific as both a dancer and a choreographer, performing in two other choreographer’s pieces tonight as well as creating these two of his own. If only his taste in music would improve.