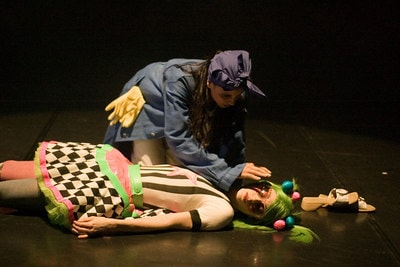 Patricia Sollak’s piece Different Creatures was easily the most entertaining work of the evening. It is a delightful fantasy romp into the lives of eleven characters.

The story begins when the green haired pop star runs out and performs a concert as her bodyguard protects her from the audience (us) and artificial smoke fills the hall. The song is sang with a silly little girl voice something like Bow Wow Wow but with far more helium. Franziska Hollinek bops around very convincingly, until suddenly someone sneaks out of the side of the stage and shoots her dead. We are then on a crime scene, as characters gather around the prostate body, including the cleaning lady. The characters slip away as more smoke fills the hall. A gorgeous male angel enters (Igor Milos looking as radiant and exquisite as a man every could) and begins a pas on his own. The pop star rises amazed to find herself alive. Another angel enters, this time a quite lovely female one and begins a duet with Igor Milos. The pop star gradually realises she’s not in Kansas anymore and that she’s dead. After a delightful six or seven minutes in heaven, we return to the scene of the crime where the cleaning lady laments the death of the pop star in a very dramatic dance convincingly performed by the beautiful Brazilian Rafaella Sant’anna (a very interesting choice for the role, going against the grain – why shouldn’t a cleaning woman be glamorous under her industrial blue workcoat), until a shaman comes dancing in and brings the pop star back to life.

Much to the delight of the cleaning lady and her bodyguard.

Alas the shaman role was one of the least convincing. While the costume was quite amusing, the whole episode drew the production over the edge and into silly kitch. While occasionally Different Creatures swerved well back into the bounds of the convincing and the moving, it never again quite acquired the transfixing quality of the first twelve minutes.

There were episodes of bank robbery played out with paper maché walls with BANK written across the top in big letters in quite an amusing cartoon way. Very reminiscent of the Rocky and Bullwinkle cartoons. The bank robber blows his suitcase full of dollars on an extremely luscious call girl. As well as a bright pink wig, the dancer’s costume included a red leather bra, a white fur boa, garters and tall black boots. For some reason the dancer just wouldn’t get out of her costume after both performances, the last to change both nights. She looked great. Why not? Kirill Kourlaev showed as much warmth as I’ve seen from him as the spurned lover. He was especially touching the first night with Elisabeth Golobina but put on good showing with stand-in Dagmar Kronberger who had to step into a major part with just a single afternoon of rehearsal. Ms. Kronberger managed to look as though she had been rehearsing the part all along and showed considerable emotional vulnerability. The injured Golobina was extremely touching and infuriating in her role as the girl who cannot make up her mind. Dagmar Kronberger as the untrue beloved

The highlight of different creatures is a final ensemble dance with everyone in character, the bank robber led around by his tie by the call girl, the lovers still arguing, the pop star singing, the bodyguard seducing the inconstant lover when not protecting the pop star, the shaman hopping madly, the cleaning lady pushing her broom between lively dances, the tree half stepping around the stage. It is a veritable chorus line, a musical revue. The dancers look like they’ve never had this much fun in their lives.

And that is the strength and the weakness of Different Creatures. We are well into the territory of the musical here, rather than dance – classical or modern. There is an absence of either aesthetic or emotional rigour throughout the piece which pushes it hard into the territory of musical or Hollywood. Music was again an issue. The use of pop anthems like Lay Your Hands from Simon Webbe for the closing scene is blatantly exploitative of the audience’s emotions.

It’s just too easy to evoke emotions on the back of the pop sound. It’s like a too thick coating of sugar on top of fruit – you can’t taste the fruit anymore.

Whether dance – neo-classical and modern – should be more open to this kind of crazy feel good work is a grander question than we can decide here and now. Perhaps it would bring larger audiences in than the current morbid minimalism. But if Ms. Sollak would like to start a career as a choreographer or a director of musicals, Different Creatures is certainly a good start.

Still one could argue that there is an undercurrent of seriousness here. Different Creatures is dedicated to a friend of the choreographer, Edeltrude Schnitzler who left this world young and suddenly. Patricia Sollak includes a philosophical introduction to the work in the program including an enigmatic definition of time: the perpetual movement of life, the wonder of the world.

I would like to flash back to Choreolab 03 – I’d just arrived in Vienna. Patricia Sollak – on one leg at the time as she’d broken her foot – put on a similarly strong show – the enigmatically named <ver.redperfekt_7.liebt>. Ms. Sollak has a strong history of showmanship.

Choreolab 03 in Halle 1030 in the third district of Vienna. Normally Hall 1030 is some kind of sport or riding hall and may not even exist anymore from what I’ve head. In any case, it is an enormous space and we were sitting basically on bleachers. In Choreolab 03, the young lovers actually drove right into the show in a beautiful antique car. They danced their pas-de-deux in the light of the headlights. It is good to see someone willing to challenge the conventions of bare modern dance staging.