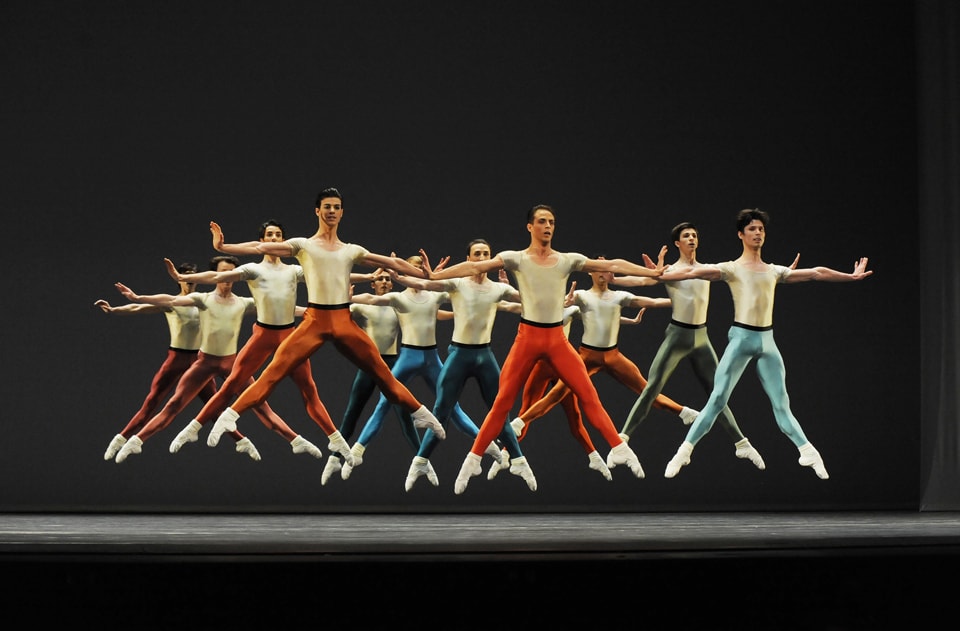 In his latest dance confection for Vienna, Staatsoper ballet director has brought us three hiterto never danced in Vienna pieces from master showman Jerome Robbins (née Rabinowitz). Robbins has the most eclectic collection of awards of any of the great choreographers, from an Oscar for film direction (West Side Story) to Tonys for Broadway musicals (Fancy Free, The King & I, West Side Story, The Pajame Game) through a French Legion of Honour.

Robbins likely does not deserve the last one, as the most active namer of names in his testimony before the House Committee on Un-American Activities in 1953, leading to the blacklisting of dozens of colleagues and acquaintances (effective professional death).

Fundamentally a showman, first as a performer and then as a creator, Robbins felt that there should not be a divide between commercial artists and high art, i.e. a successful Broadway choreographer should be allowed to set ballet. The three works chosen by Legris showcase Robbins’ work as an avant-garde choreographer, a Romantic ballet master and a Broadway showman in turn.

Who has one time heard the trombone of Glass Pieces from Philip Glass will never hear the trombone the same again. Each puff resonates through twenty beautiful figures moving at speed, changing the world with a precise gesture. 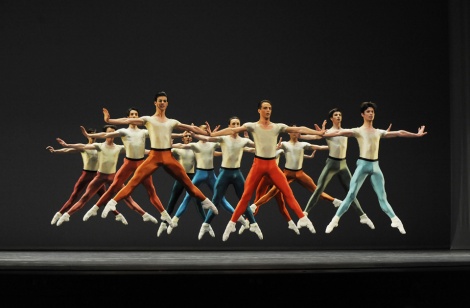 Glass Pieces drives the viewer into a profoundly meditative state. Colours, some light, sound, we are children again staring into a xylescope.

The piece opens casually enough with an army of colourfully dressed pedestrians crossing back and forth across the stage. Periodicaly the crowd are interrupted by pairs, pink, emerald, blue. Each pair tunes its affection in a different way.

Natalie Kush and Shane A. Wuerthner were particularly touching in pink. She so small and fragile and optimistic, Wuerthner taller and cool. The last times I’ve seen him dance he’s been paired with dancers like Olga Esina who overwhelm him. His own talents shine brighter with a more petite dancer.

Kiyoka Hashimoto and Masayu Kimoto dance well together, in what has been a season of revelation for Kimoto.

Olga Esina makes her own appearance late in the lead role opposite Roman Lazik. Glass Pieces is written just for her kind of awesome ballerina. Esina’s endless limbs, noble carriage and schooled movements bring grace to the piece and she glildes across its surface as if on wings. Glass Pieces demands of a dancer to be one with the music and this Esina masters. She is the perfect muse, here no emotional demands to distract her from herself.

In darkest shiniest bordeaux Roman Lazik partners Olga Esina. Once again, Lazik shows himself a perfect partner attentive to her every step but one wishes that one day he himself would dance his own steps for himself. 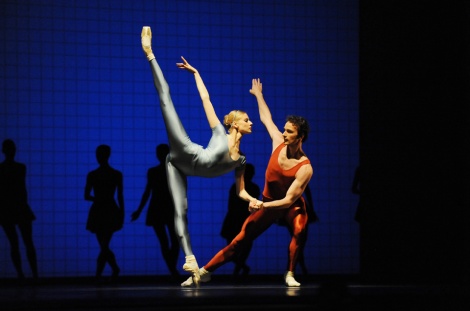 In the corps-de-ballet, Andrey Teterin is easily the most impressive of the men when in the middle or the back of the pack. He is let down only by his uncertainty when front and center, a strange lingering stage inhibition. If he ever overcomes it, Teterin will be a force with which to reckoned, with his strong lines and forceful jump.

In the Night is guided by a piano solo, a rather limpid Chopin Nocturne. This is art of the simpering kind. Across a starlit stage, Robbins reveals three couples, in purple, in brown and in pink. Each dances a tender pas, with the occasional ethereal lift. The piece never really took off, as none of the pairs grabbed any hearts.

Andrej Teterin returns to adequately partner Natalie Kush who is radiant at her second leading role of the evening. Teterin is again let down by the uncertainty of his steps at the most important moments.

Olga Esina and Roman Lazik take the stage second. Again, Lazik is attentive. Again he fails to participate in the piece himself, a cipher for his ballerina. Esina struggled with the trite emotions, ending up as in the first piece, like glass. The long flowing gown from In The Night hides her natural attributes and Esina is a dancer like another.

It appears Vienna Staastoper still does not have the right partner for Esina, one who would push her to the next level. The closest physical match would appear to be ex-husband Shishov but both are dancing better since separated. Perhaps Eno Peci could do Esina justice.

The Concert, or the Perils of Everybody

In the final piece, The Concert or the Perils of Everybody we see a lot of Peci.

He delights the audience as the murderous and adulterous husband. Behind a false nose, Peci is unrecognisable. He wears the role of an unhappy husband like his own dressing gown. 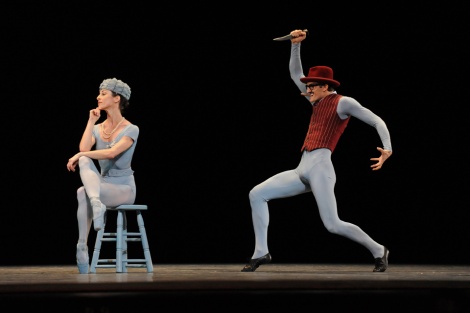 He is well-paired with Irina Tsymbal as the ballerina, object of love. Franziska Wallner-Hollinek incarnates his grande dame wife perfectly, her native Vienna upbringing and aristocratic profile serving her well.

Denys Cherevychko plays against character for once as the shy young man. Ludmila Trayan inspires no end of laughter as the energetic young woman, whether sitting next to the pianist or pushing people off their chairs 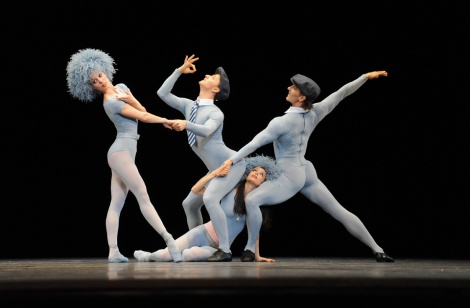 The Concert is a very strange piece oscillating from straight parody to Prufrock-like dark reflections on existence. The funny moments seem rather silly at first until the unhappy husband kicks his would-be lover the ballerina, shortly after pantomiming the murder of his wife. The women are moved around like inanimate furniture.

There seems to be some curious underlying mysogeny in the piece bubbling just under the surface. Women are beautiful but annoying. Probably true. But then men are annoying too and don’t even have beauty to redeem them.

Parody of dance fills The Concert: whether in the Hungarian dance of the men or the extended ballet episode where the energetic girl can’t hold her place in the corps-de-ballet.

Dancers get so tired of Swan Lake, Giselle and Sylphides that there is nothing they love more than a good bout of dance parody, whether in Don Quixote or Robbins’s The Concert. They were all delighted to perform here and in the end, Robbins does have a point.

It’s damn hard to live and wherever you look, whether at a concert or a ballet or even in your own home, everything and everybody is annoying. Even your own mistress.

Hopefully we can see another side of life but in this dance version of the Love Song of J. Alfred Prufrock there is much to enjoy. Tart like the fizz on champagne but like champagne best consumed in moderation.

Staatsoper will be performing Jerome Robbins’s work throughout September 2011 and March 2012. For specific performances, see The Staastoper website