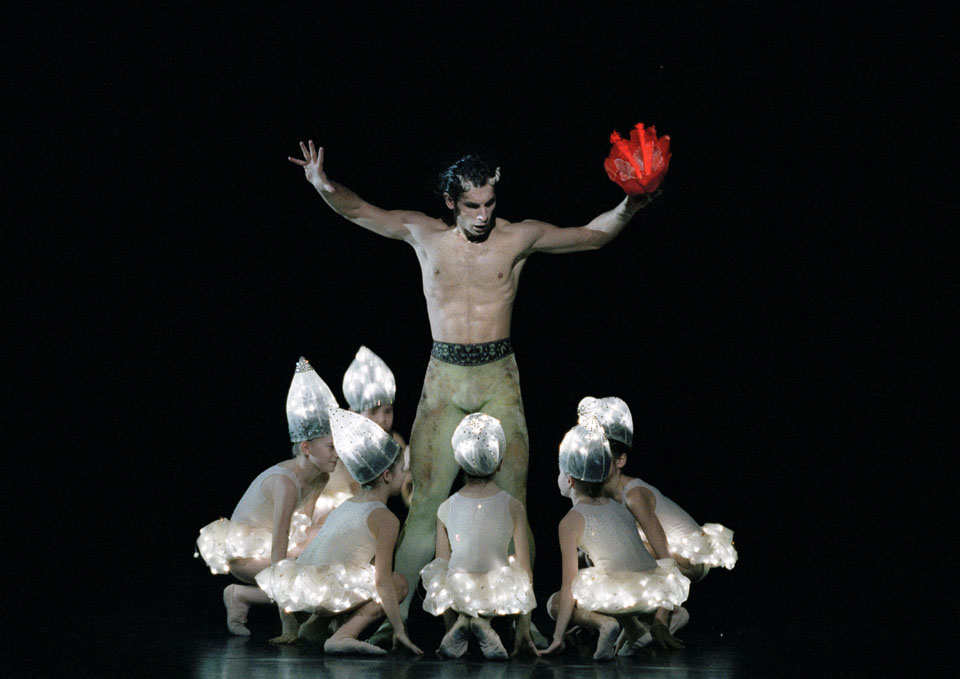 Jormo Elo’s A Midsummernight’s Dream Ballet at Vienna Staatsoper: A Slow Start but a Strong Finish

The premiere of A Midsummer Night’s Dream at Vienna Staatsoper was a remarkable occasion for two reasons:

How was the ballet?

In the first act, Elo found himself too wound up in the plot intrigues of Shakespeare’s Midsummer Night’s Dream. Oberon, Titania, Theseus, Hippoylyta, Lysander, Hermia, Demetrius, Helena: there’s almost too many love intrigues to keep track of even in dramatic theatre, let alone ballet. That’s before bringing in the company of players to whom Elo gave the stage, not just Bottom. Not to mention Puck.

The consequence of so many bodies on stage and so many stories to unravel was excessive pantomime. A leading figure of Vienna ballet aptly applied the word old-fashioned to describe the effect.

In the 19th century, it made sense to have so much nodding and poking and face pulling to try to tell the story. In this century, first Les Ballets Russes of Diaghilev and later Roland Petit and Juri Grigorovich managed to shake off the shackles of pantomime for direct expression of the story in dance. George Balanchine and Jiří Kylián took it a step further and removed linear story as a requirement for evening length dance. It is a strange feeling to go back to the wagging heads and clutched bosoms and gesticulating hands in a new ballet.

The costumes added to this baroque feel. So much gold and detail and filaments. If the goal was to create a gilded Shakespeare of the 18th century, San Francisco designer Sandra Woodall was very successful. But together with the pantomime, the look was very dated, like something out of the 1950’s. While the ballet was created for Vienna, but there is no reason to add more gilded chocolate boxes than we already have.

The music is one of the principal delights of A Midsummer Night’s Dream. The score is taken from the works of Romantic composer Felix Mendelssohn Bartholdy, principally a score of 1843. In the middle of the splendid string works, a woman’s choir of about a dozen is called to crowd into the left of the orchestra pit. Simina Ivan and Lydia Rathkolb made excellent lyric work of their songs. One could attend A Midsummer Night’s Dream with eyes closed for the music alone. Fortunately that is not necessary in this presentation.

Among the dancers there was little to criticize. Vladimir Shishov shook off his rehearsal doldrums and gave himself quite enthusiastically to his work, his elven locks and pointy features doing him no small good as the Fairie King. Mihail Sosnovschi is in incredible form, muscular from head to toe. With his fierce dancing in the role, he is a Puck more to fear than to amuse. Wolfgang Grascher was a regal Duke of Athens. Every ballet theater should have such a movie matinee patrician. Probably a bit dull for Grascher himself after the dance exploits of his long career but excellent for the production. 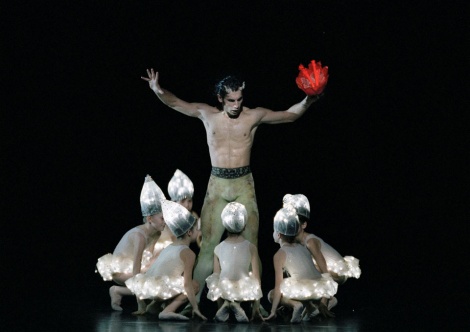 Roman Lazik was an obliging Lysander. He is far better as a comic lover than a prince: his moderate athletic skills and smaller presence go unremarked. As Lysander, he is a delight to behold, light of step and countenance. András Lukács took the opportunity as Demetrius to show off his considerable caricature and grotesque talents. Levity followed his every appearance.

The theatre company was a splendid group of character dancers, led by Gabor Oberegger as Bottom. Thomas Mayerhofer, Dan Datcu, Christoph Wenzel, Richard Szabó and the striking gaunt Alexis Forabosco made the most of their opportunity for group standup comedy. I’m not sure if it added much to the ballet but in itself they were a lot of fun. At one point, Oberegger valiantly sings a love song to Titania in bed. Spoken word and song are unusual demands on a ballet dancer and Oberegger came across as a musical veteran.

Among the women, Nina Poláková shone most brightly, in her role as Helena, curiously outdoing both the Russians, Olga Esina and Karina Sarkissova. Poláková was smooth and swift, with fluid grand battements. Her performance as the rejected lover revealed a touching vulnerability. Karina Sarkissova was also quick and determined, if a little cold for my taste in her role as Hermia. She had ample opportunity to show off her considerable technical skills to which she availed herself. There was little to criticize in her brash work but little to love. One day I hope to see Karina Sarkissova dance a little more softly and with more feeling. 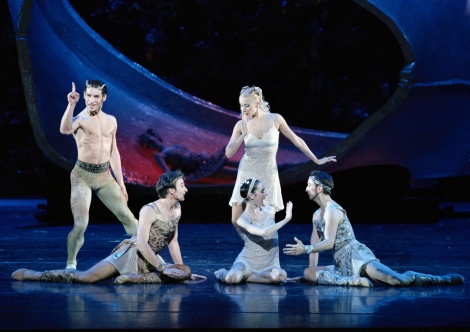 Olga Esina as Titania is a special problem. She is a magnificent ballerina, perhaps the most physically gifted and most beautiful dancer ever to grace the Staatsoper stage. But with great gifts come great responsibilities and it seemed to me that Esina never moved at more than seventy per cent capability through the evening. She still could do little harm but with a little more effort she could do so much more. Watching Esina dance is an exercise in frustration. She is the best in the company but could be so much more. This abstraction from her work gave Poláková the chance to steal the the spotlight as Helena. In Elo’s A Midsummer Night’s Dream should belong unequivocally to Titania. 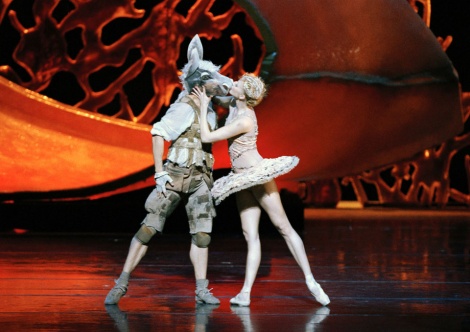 What is the remedy? In my opinion, direct one on one coaching for Esina with a strict Russian coach. It wouldn’t cost all that much to bring one of the best in from St Petersburg (they don’t earn much in the Vaganova Academy) for three years to see if she can make Esina into the international prima which she should be, rather than a splendidly gifted provincial.

Gyula Harangozó might do this as Esina is his personal gift to Vienna, but I’m not at all sure the new director, Manuel Legris will grasp the issue soon enough to bring quick remedy. Perhaps I’m not optimistic enough. Legris has brought Paris’s Etoile system to Vienna and of the female soloists he has promoted just Maria Yakovleva and Olga Esina to Etoile so he does understand Esina’s importance to Staatsoper ballet. While improving her steps, her director might order her some special dramatic lessons as well. It’s not that Esina doesn’t have strage presence, it’s that it’s neither harnessed nor controlled. Ideally, the right Russian ballerina coach could teach her both.

On a lighter note, whoever did Esina’s hair and makeup for Titania deserves to be sent back to finishing school. Esina looked so much better in rehearsal when she put up her own splendid blonde hair herself with casual cascading locks. The hairdresser managed to strap her head under a jewelled helmet that made her look more like an evil sorceress than a good fairy. 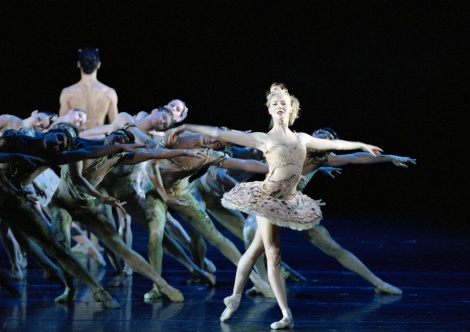 For all of these caveats about the confusion and pantomime of the first act of A Midsummer Night’s Dream, the second act was genuinely splendid. Elo finally puts the story behind him and allows his choreographic imagination to take flight. The second act quickly becomes a marriage celebration with pairs followed by corps movements, by two pairs, by long pas de deux, with more group movements.

The different pieces cascade by without respite in a regale of dancing. The closest comparison I can find in George Balanchine’s Jewels. A Midsummer Night’s Dream offers the same varied but coherent variations. So the evening ends on a high note.

Both Iliana Chivarova and Oxana Kiyanenko lead the corps-de-ballet most valiantly in Elo’s grand dances against Bartholody’s famous Wedding March.

The second cast promises to be very capable as well, with Kirill Kourlaev as Oberon, Irina Tsymbal (sadly in her last season in Staatsoper, with every year comes more emotional nuance in her dancing) at Titania and with Maria Yakovleva as Hermia.

Despite the rather old-fashioned and too elaborate first act, A Midsummer Night’s Dream is a splendid concotion of music and movement and light. Gyula Harangozó can be very proud of the company he is leaving at Staatsoper and of the final piece he has added to their repertoire. With the ice broken Jorma Elo will get more chances at full length ballet. It will be interesting to see whether he ever gets lost in pantomime again as in the first act or manages to communicate his meaning in dance as in the second act henceforth.