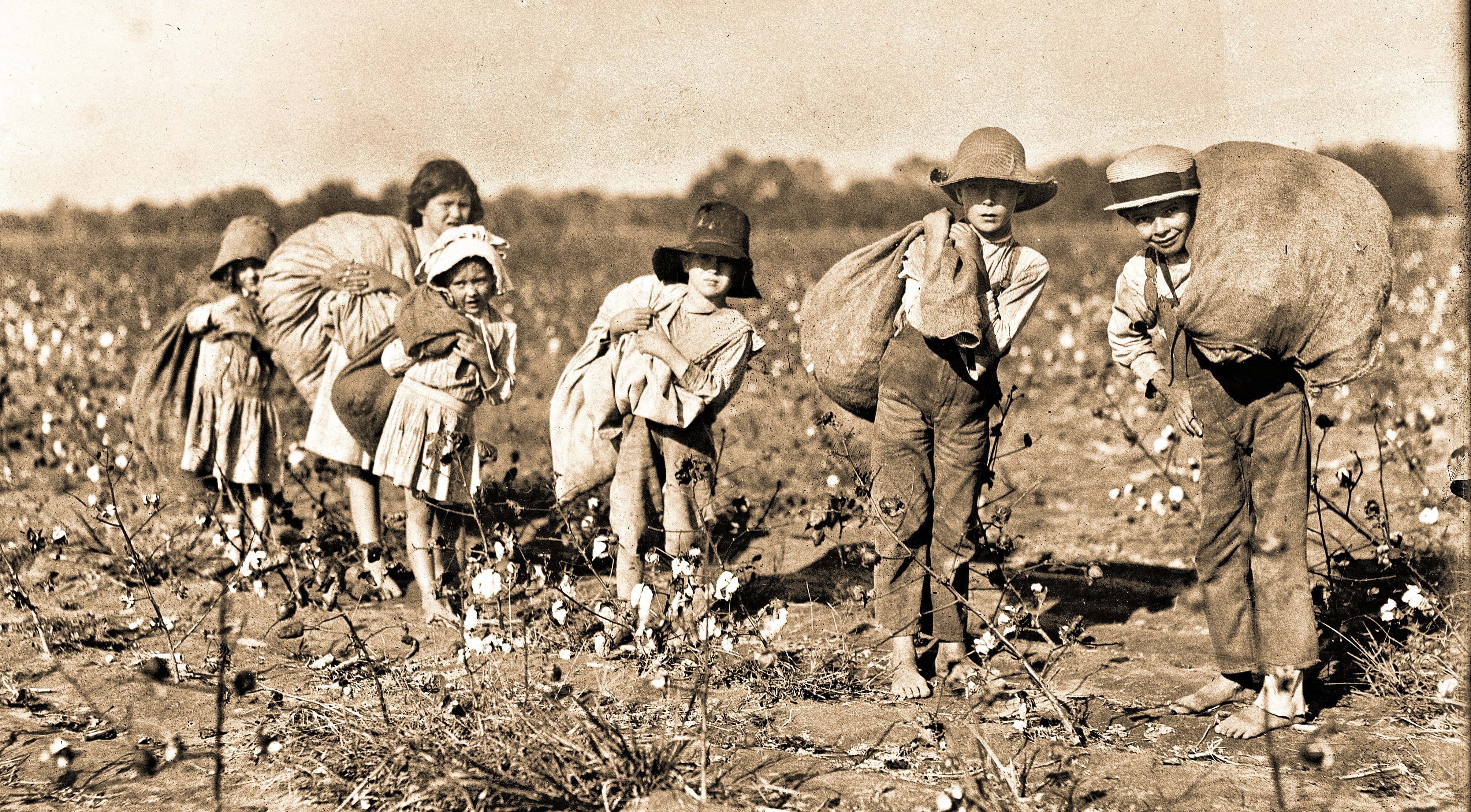 Is China deploying slave labour in its cotton fields?

The latest hue and cry about China concerns slave labour in cotton fields in China’s Xinjiang province. Ostensibly the slave labourers are persecuted Uighurs. Generally picking cotton, like gathering grapes, is back-breaking work. One could probably call cotton pickers slave labourers anywhere in the world. The pickers in the illustration above are sharecroppers’ children in the US in 1909. Modern pictures from around the world don’t look much better. Here is Claude Renault’s photograph of A woman picking cotton in a field near Nagarjuna Sagar in India, a century later in 2005. It’s still back breaking work. 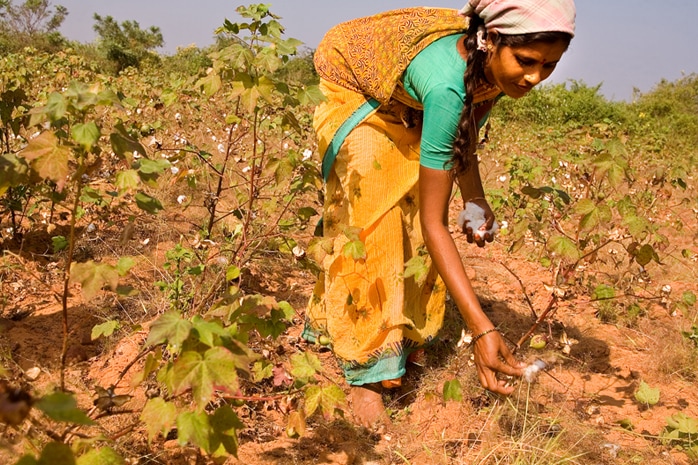 In terms of the treatment of Uighurs in China, the only comment I would make is that violent revolutionaries and separatists in the West have been fairly harshly dealt with. Prime Minister Pierre Trudeau declared martial law in the face of the Quebec separatist movement. Currently Catalonian elected members of European Parliament have had their immunity lifted and are subject to extradition to Spain where draconian prison sentences await them. Sedition is usually the charge we bandy about.

To leave the Uigher question for another day and more generally address the slave labour issue, dustinthewind makes a very good argument against general slave labour in China. Call it the Henry Ford argument.

The slave labor nonsense is BS as is the torture and selling of organs of the Uighars which came from on paper written by someone in Germany and has been proved false. Those in the west are simply gullible and governments using the media know that if they repeat something enough learning from Goebbels the public will believe. Weapons of mass destruction, a guy in a cave planned and coordinated 9-11, Syria gassed its own people, Russia invaded and stole Crimea, Contra drugs for weapons in Nicaragua, Chinese suppressing religion and “western values” in Hong Kong, destroying Venezuela and its population to remove another elected leader as in Ukraine, removing Trump and of course no election fraud, and its goes on and on and on.

China has been building the largest consumer economy on the planet and many international firms like Volkswagen sell more units there than anywhere. Obviously you do not create the largest consumer economy and have the population buy things from all over the world if you are paying slave labor. The west likes to compare wages using exchange rates which the dollar being stronger than most other currencies gives people a false sense of reality. A good example in reverse is Japan back over 2 decades ago and the Big Mac index. Back then a Mac would cost you over $10 US dollars using our currency but obviously Mcdonalds could never survive if the Japanese were actually paying that much in yen terms in purchasing power. Using PPP how much does $100 yuan in China buy you compared to $100 dollars in the US if you bought the same exact items. The yuan would buy you everything on the list and have money left over while in the US the $100 would not even buy the whole list. So the bottom line is not only in China but other countries how far does a currency go in that specific country compared to how far does a dollar go in the US. The yuan has more buying power so using exchange rates to compare wages is misleading. The wages seem lower using this example as the west is famous for but in reality the yuan buys much more. You need more dollars in income to survive in the US hence higher wages when compared to other countries. That does not mean others are receiving slave labor. Their paychecks although lower simply buy more and hence why China now has such a large consumer economy. Last months retail sales there were a disappointment and the Central Committee met and their goal at that meeting was “How do we increase disposable income” and increase living standards” while Biden and his other communist and socialist are going to reduce disposable income, lower living standards, lower GDP, create more wealth inequality in a period of the economy headed for a depression next year which these polices are the last thing any sane human would do. Add in the cost of illegal immigrants and the next massive $4 trillion debt plan, the US is in trouble, big trouble. As Dr Hunt has said the government has taken and taken a larger piece of the pie from the people to survive and now even before the new taxes the economy can no longer generate any significant growth or job creation. Mismanagement on an indescribable scale. As he also states GDP does not subtract from the massive capital and wealth destruction from the lockdowns and these jobs and businesses simply cannot be replaced in a few years. The economic stats are misleading. GDP falling 32% and then going back up doesn’t account for the massive hollowing out from the destruction that it caused.

China has now the largest economy surpassing the US measuring GDP using PPP and soon it will pass the US using nominal GDP as the polices in the west of the Great Reset will destroy western society and its economies. Again the models at Armstrong Economics also forecast China becomes the world’s financial center as capital will accelerate from west to east as the massive tax increases start in the west. The models are already tracking capital fleeing Europe to China buying mostly 3% bonds which will accelerate as we move into the future. China also last year has passed the US in foreign direct investment. Capital knows no national boundaries or ideology and will always move to where it can get yield and it believes is safe. The US and the west are losing that belief in safety and return as the dems controlled by the World Economic Forum are implementing their destruction of economies, fossil fuels, businesses, pensions, owning small businesses, etc. as the coming tax increases will wipe out the remaining middle class and create massive wealth inequality and massive job losses as we enter 2022 and the Great Depression. The US along with the west are headed for a breakup which is post 2032 and economic hardships starting next year worse than now.

I call it the Henry Ford argument as Ford revolutionised the car industry and created the largest car manufacturer in the world in 1903. By 1910, Ford was selling more Model T cars than all the other car manufacturers in the world. He did not do so by employing slave labour but by paying a living wage, allowing his own employees to buy Model T’s. In his own words:

I will build a motor car for the great multitude. It will be large enough for the family, but small enough for the individual to run and care for. It will be constructed of the best materials, by the best men to be hired, after the simplest designs that modern engineering can devise. But it will be so low in price that no man making a good salary will be unable to own one.

I’m not a huge fan of cars – cars have done and continue to do enormous damage to the natural world – more of a bicycle man myself. And I keep my bicycles for ten, fifteen, twenty years. Most of the bicycles I’ve retired were due to theft. But Ford is right here about living wages. One cannot sustain an economic boom by failing to pay workers enough to participate in general prosperity. If slave labour worked, the Pharaohs would still reign over the entire Middle East and would have taken over Europe too.

This charge of slave labour looks like another propaganda stick invented with which to beat China. It’s sad that our politicians and captains of industry only hope to win in business is by making up stories to exclude competition. Not a very free enterprise approach, I must say.