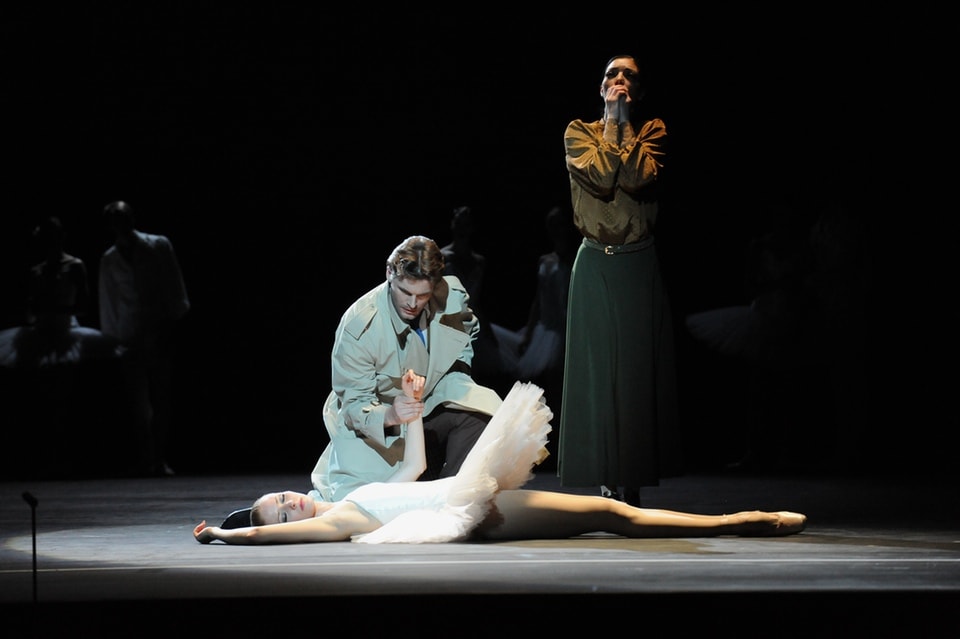 Le Concours is an amusing confection of a ballet put together by Maurice Béjart at the height of his fame in 1985. Béjart’s own Ballet of the XXth Century danced the premiere of Le Concurs in Théâtre du Châtelet, a temple of contemporary dance. 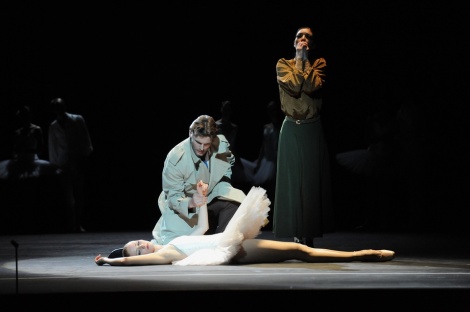 But Le Concours is no work of high art, but rather a simple theatrical murder mystery told in the language of dance. Cleverly Béjart sets his murder mystery at a dance competition which easily explains the constant pirouettes and the lifts. Curiously in real life Béjart turned down every invitation to do dance jury duty, finding ballet competition barbaric. In line with the dance theme, music is a very arch pastiche of Giselle, Sleeping Beauty, La Bayadère, Swan Lake and Coppelia bound by atmospheric orchestration from Hugues Le Bars.

At 58 years of age, irony is a more natural expression than passion. Béjart is one of the last of the great choreographers to feel that ballet and modern dance would become a mainstream art form, taking a place in the daily newspapers beside music, fashion, television and film. And so Le Concours was created: not as a masterwork or a deep expression on life but an ironic glance at life’s beautiful surfaces.

Le Concours owes a deep debt to pop culture, with a protagonist drawn directly from Alain Delon’s incarnations of trench coated police inspectors and Peter’s Falk’s Columbo. Do not search for any more meaning in Le Concours than in a good detective drama: there are only moments.

As ballet contestant Ada and murder victim, Olga Esina is a revelation. Esina has comedic talents one would not expect after seeing her as various Giselles, Swans and Bayadères. Perhaps our long armed sylph has wearied of perishing to heartbreak or schizophrenia every night in the grand ballets.

Given some passable dramaturgy and some delicate attention, Esina truly comes to life. Esina was particularly delightful as a lithesome showgirl to Igor Milos’s masterful magician.

Other noteworthy performances: squared jawed Gregor Hatala certainly looks the part of a stocky cop but lacked intensity and focus the night I saw him.

Samuel Colombet as the French juror and chairman of the jury seemed drawn from life. He’s ready for cinema. Serbian dancer Gala Jovanovic nearly stole the show as the American jurist. Many of her excessive enthusiasms apply just as well to certain Austrian balletomanes. But Jovanovic did not need to work so hard on letting us know that she finds her character kitsch and silly. She needed only be the character herself and let us find the humour ourselves.

As the celebrity TV choreographer, Eno Peci falls doubly into the same trap himself. In love with himself and his own work, his character’s actions are funny. Absolutely no need to ham his episode up relentlessly. What should have been an ironic delight slanted towards tiresome shallow parody.

Ketevan Papava as Ada’s mother, grande ballerina La Brambilla measured her performance more carefully, convincing as both a dancer and a terrifying mother. With every show, Papava gets better. If they could find a tall enough partner for her, there’s more and more reason to rescue Papava from various gypsy and Mirtha rolls and offer some of the leading roles she danced in the Marinsky.

Le Concours is a perfect piece for Vienna’s Volksoper, well chosen for the public of that venue, who loves a good laugh and an easy evening in the theatre. Performances should be full and Le Concours could easily go into permanent repertoire. It’s a nice respite for the dancers in a season of high art Staatsoper premieres.

As has become a habit, ballet director Legris made sure that the same level of coaching was available to his stagings as would be at Paris Opera. It’s very likely hotel and coach’s fees are a step higher than the accountants at Vienna Staatsoper would like to see for the ballet. But the results are worth it.

Dance director of Ballet du Rhine Bertrand d’At came into town to work with Esina and the rest of the cast. d’At danced and worked directly with Béjart for 15 years. Manuel Legris himself had danced the role of the inspector with Aurélie Dupont in 1999 in Le Concours premiere at Opera National de Paris, under Béjart’s own firm hand.

One starts to see a pattern in Legris’ relentless premieres in Vienna. He doesn’t feel he has arrived yet – Legris is still on his way. Vienna is a dress rehearsal for the directorship of the Opera de Paris. If not in the next few years, then in ten. Better for us, that Legris’ time in our heavenly purgatory stretches on and on and on. And good for Legris too: the water is better in Vienna, the air not so smoggy, the sidewalks not so crowded as in Paris.