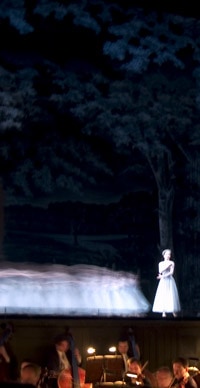 giselle at vienna state opera | revelation: patricia tichy in the role of mirta

yesterday i had the pleasure of seeing one of my favorite ballets again. the vienna state opera ballet company performed giselle.

the highlight of the evening was supposed to be the visit of margaret illmann. while there was much bourgeouis applause for her performance, the title role in giselle is not one for a mature ballerina. i’ve had the misfortune of seeing ludmilla semenyaka and ekaterina maksimivoa dance it at the end of theirs career as well and i felt like i was seeing double again.

while these great dancers can literally walk through the role, they simply no longer have the vulnerability and hopefulness in each step that a younger dance can have (not all do). their attempts to mimic girlishness (for in the story giselle could not be more than eighteen years old) in their movements, inevitably turns into a kind of parody.

one feels more like one is watching a drag queen perform as it is someone mimicing what he or she (as the case may be) is not. i mean you look at this mature woman – and every line of her tight and drawn and chiseled form shouts of maturity – and think, surely lady you can’t still be running from men still. you really couldn’t lose your mind at this point in your life after a slow dance and a few hours tête-à-tête.

boris nebyla did his best to be that prince over whom ordinary women lose their minds, princesses lose their cool and spurned lovers’ ghosts return to protect from graveyard avenging angels.

sadly mr. nebyla has neither the charisma or physique to carry it off.

frankly by the middle of the first act, i didn’t care what happened to one or of the other of them, the sole point of pleasure being the inevitably wonderful performance of the orchestra. i’ve never heard the score of giselle brought better to life than by conrad artmüller and his musicians, including – for those counting women musicians in vienna – two distaff cellists and one percussionist.

the country couple were eminently forgettable in their solo. karinna sarkissova left no impression at all. some particularly inanely performed flourishes of the arm only served to draw unpleasant attention to kirill kourlaev.

as one of my companions notes, in the first act one felt lost in some provincial theatre in bratislava.

but the problem was with the dancing and performance rather than the sombre decor.

ingolf brunn’s sweeping panoramas of mountains remind one of the carinithian vales, only without the verdure. tasteful if not inspiring, the costuming by clarisse praun-maylunna was equally in shades of grey. a coherent if dark aesthetic, far different from the splashy or homespun look in many russian and north american productions.

the only high points were in the more dramatic roles – that of hilarion the hunter and berthe, giselle’s mother. christoph wenzel seemed to suffer genuine indignation and loss at the perfidy of giselle (new guy shows up in town and country girl is on his arm at the drop of a hat). gerit schwank was radiant as the mother, as besotted with her lovely daughter as austrian mothers seem wont to be. 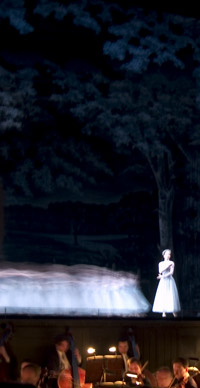 happily the second act awoke us from our slumber. last night was the premiere performance of patricia tichy in the role of mirta and of veronica ikriannikova and dagmar kronberger. all acquitted themselves well, but ms. tichy was a revelation.

mirta is the queen of the damned, those spurned maidens who have died of chagrin or worse. it is a baroque conceit, but a terrifying one for a reflective man. likely it is a somewhat ecstatic fantasy for less progressive women who still care for the role of men in their lives.

last night, the men shivered in their comfortable velvet chairs and the women thrilled as ms tichy lived and breathed the silent wrath and cool contempt of mirta. in every curved movement of her arms, one felt her disdain and remorselessness. 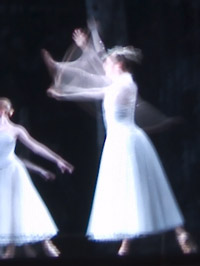 first the unfortunate hilarion must perish (what for? he genuinely loved the girl). no pity. ms tichy had not a second glance for him, waving on his execution by her perfectly synchronized host of maiden ghosts with a single thrust of her arm.

for the grieving albrecht, mirta has no more pity, sending the willis for him again and again, heeding not the phantom giselle’s entreaties. only the dawn drove ms tichy from her purpose, most reluctantly leaving albrecht alive.

ms tichy’s coldness seemed to swell from the center of her being. she was entirely focused on her ghostly horde and the cold fire raging within her. the theatre was transfixed by her presence.

there were many curtain calls. the presence of the legendary margaret illmann, no doubt summonned a particularly passionate ballet crowd. ms tichy can be very proud that the warmth of the applause for her debut performance as a soloist equalled that of the reception for the prima. 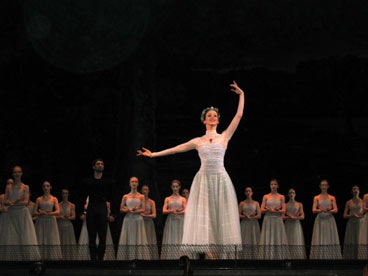 but after seeing her commanding performance as mirta, i am not certain that pride is a characteristic that ms tichy ought develop in herself any further.

in any case, if her work as mirta is any indication, we may hope to see a great deal more of ms tichy at the wien staatsoper in other leading roles.