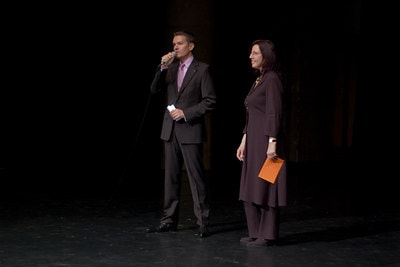 Choreolab is one of the brightest and most joyful of the annual dance occasions in Vienna. Normally Choreolab comes once a year most often in November.

Choreolab allows a selection of dancers in the company to stage fifteen minute to hour long works on their fellows from the Staatsoper (and now the Volksoper). This is really a privilege for these young choreographers as they don’t need to worry about organising a venue nor trying to hire dancers. They get a first rate cast in a top calibre venue with full lighting and excellent possibilities for staging the work as they see it. In Choreolab 2003 Patricia Sollak had the dancers drive an antique car around the stage; in Choreolab 2004 Vanessa Tamburi put on a massive show with multiple costume and make up changes and video projection with at least a dozen dancers. 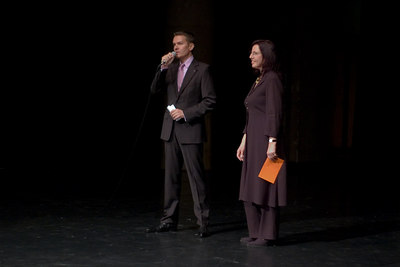 The events include artistic talks, backstage tours, special trips, prize ceremonies for dancers and a bimonthly glossy magazine called dancer’s which is culture and lifestyle magazine.

As dance and ballet need all the support and publicity they can get, I have to say it is awfully kind of the Tichy-Lugers to put so much energy into supporting Vienna State Opera Ballet and dance in general. In the beginning, it was a lot to organise and perhaps the quality of the events may have been uneven.

Public speaking seemed somehow new to Ingeborg Tichy-Luger. She was more enthusiastic than coherent – and she often spoke to excessive length with multiple effusions of gratitude. This year her speech was succinct and complete with clearly expressed thanks to the necessary parties.

The venue was wonderful – the Odeon Theatre in the second district in Vienna on Taborstrasse – an expansive space with wonderful antique columns on the back brick wall as the photograph below reveals.

Moreover, the Tichy-Lugers managed to land Austrian actor and television celebrity Alfons Haider, moderator of Dancing Stars and the Vienna Opera Ball. Unfortunately on opening night, Alfons Haider was unable to attend as he was the host of the Golden Romy Austrian television awards. 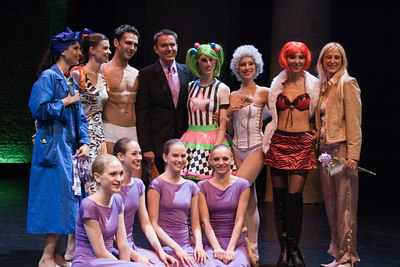 On Saturday night, his place as guest of honor was filled by the Hungarian Ambassador Dr. István Horváth whose Embassy organised a very good buffet with Hungarian wines and home made sweets after the opening. It was encouraging to see such official patronage of new dance.

But on Sunday night, Mr. Haider was there in pink shirt and with plenty of enthusiasm. He both introduced the evening speaking of his love of ballet with evident sincerity and conducted a short post-mortem with the choreographers, interviewing each of them about their work.

In the small media world of Austria, Mr. Haider’s patronage and participation means that Choreolab has officially arrived and the Balletclub of the Vienna State Opera and Volksoper has become something of an institution.

But what happened to Choreolab 2005? In late 2004, the Vienna State Opera ballet was shaken with the dismissal of then director Renato Zanella. In the fall of 2005 Gyula Harangozó took over the reigns of power. The Tichy-Lugers were caught as it were between regimes, given the bonds of friendship between themselves and director Zanella.

Evidently the Balletclub has managed to cross the divide and is now no longer dependent on its relationship with any single company director.

One strange and slightly unpleasant condition that director Harangozo imposed on Choreolab 2006 was his personal approval for content and presentation of each of the works presented. A sort of censorship as it were. Fortunately, as far as I know, his right of censure was not exercised but formally a last minute approval by the company director of unpaid volunteer choreography and dancing seems out of place.

What makes the dancers do it? They love to dance and this is a chance for those still in the corps-de-ballet to shine and a chance for the soloists to do something outside of the classic repertoire and push themselves a little bit.

For the audience, it is a chance to see something complete new and to see the Staatsoper dancers outside of their traditional repertoire. And often what one sees is amazingly good.

So in the end, Choreo.lab is the gift of the Tichy-Luger’s to the world of ballet.