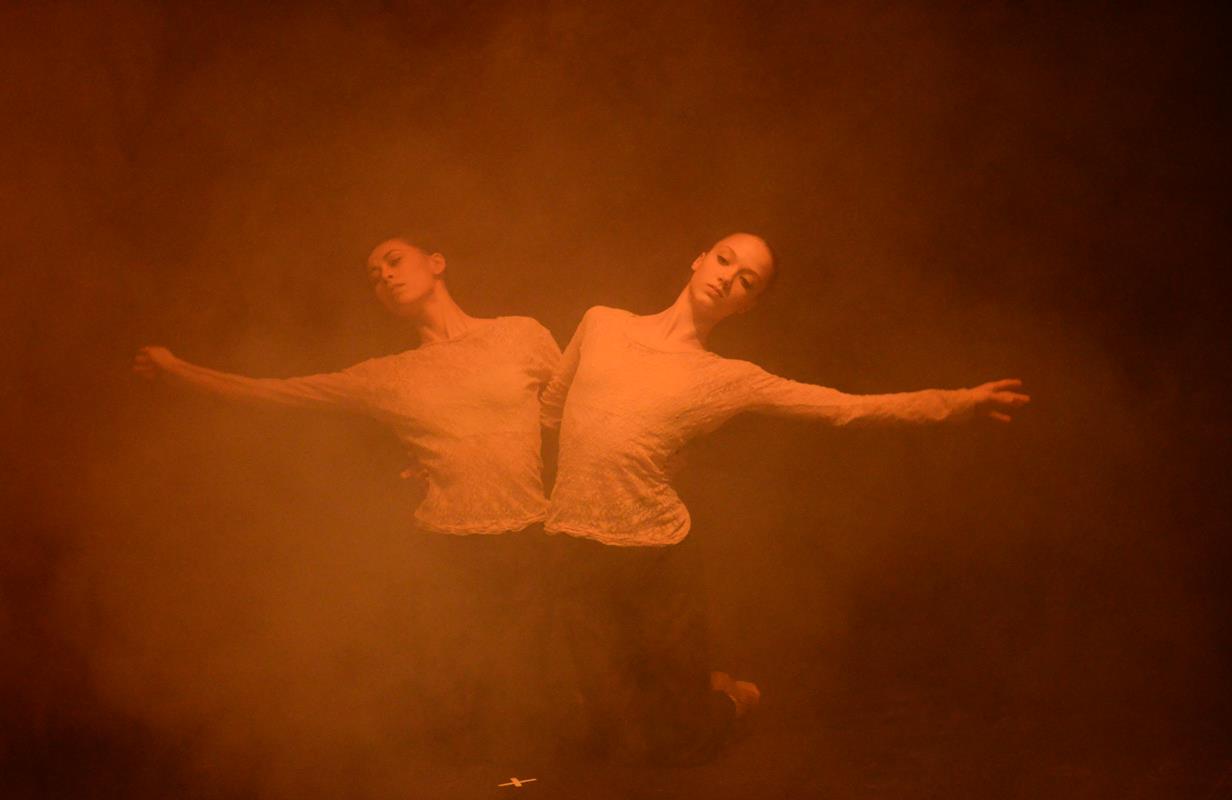 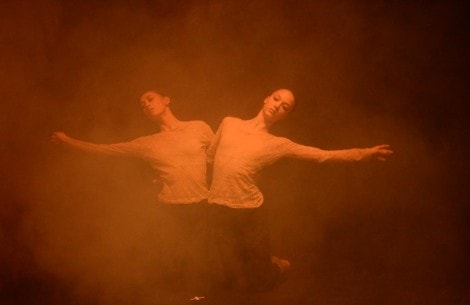 So many people put so much into Choreo.lab to make it happen, to finance it, to create it. Vintner Hvram, every year brings up some of the finest cuvées from Burgenland. From the ambassador’s wives to the professors in the audience, Ingeborg Tichy Luger is a lady very precise in her gratitude. I thought all our grateful hands might fall off when we were done clapping for everyone present and everyone who contributed. Tip to the producer: group the people and fire through the names in a group and let us clap louder for four or five names together.

This year under Choreo.lab under the aegis of Staatsoper and ballet artistic director Manuel Legris was even more ambitious than usual with a full nine pieces in two acts, including two from Fabrizio Coppo.

Choreo.lab veteran Samuel Colombet opened the evening with a Balanchinesque bit of neoclassicism. The costumes were unusually good, splendidly draped white over four beautiful dancers Ionna Avraam, Iliana Chivarova, Erika Kovacova and Rui Tamai. In particular, Ms. Avraam was in spectacular form. One could also see why Manuel Legris promoted Erika Kovacova to the main stage from Volksopera. In line, she is like the top Paris Opera dancers. Her dancing is very smooth, but a certain absence of snap and a weak jump break the illusion you might be watching a younger Elisabeth Platel.

As accomplished and lovely as Columbet’s distaff contingent, his men were extraordinarily beautiful led by a dramatic Martin Winter. Young Felipe Vieira is like a confection, with almond roasted skin and cherub mouth. Gleb Sheilov did not stand out but supported his comrades well.

The difficulty with Columbet’s Oktett is in the end was the easiniess of some of the choices: a concerto from Felix Mendelssohn-Bartholdy is a certain crowd pleaser. The splendid lifts and accomplished steps and bare torsos of handsome men almost cannot fail to delight a ballet audience. In the end, after Oktett one has enormously enjoyed what one has seen but little remains.

In don’t know, Martin Winter takes greater risks as a choreographer. With the music of Arvo Pärt he is nearly as safe musically as Columbet but his language of movement is far more challenging. Greig Matthews carries Reina Sawai in ways which are completely unnatural. The lifts are dramatic and almost dangerous. When dancing apart, Matthews is even more compelling with almost faun like poses and tremendous speed. One wishes that he and Sawai had more time to rehearse the piece. This one is good enough to travel with so he may get the chance.

From high love we dip into deep kitsch in the next piece Elegia. A cravatted pianist enters with a heavy letter in his hand. He struggles to open the velum. Oh no, the words of parting. His dear john letter. In the meantime, stage left literally clouds of smoke are billowing in. Igor Zapravdin starts to play the grand piano. Florian Hurler wanders in in a high collared white shirt, looking fetching in a Hollywood thirties kind of way. Out of the smoke Ekaterina Fitzka comes running. The Rachmaninoff trumbles along as the lady slowly spurns Hurler as the pianist’s alter ego. Better to have loved and lost than not to have loved at all. Fitzka aspires to the place of the absent but not forgotten Karina Sarkissova. Russian dancers passed via the St Polten choreographic school haven incredible affinity with kitsch. Hurler is handsome in a high German sort of way with Grecian profile and blonde hair: you look for his dueling scars.

But not all Russian choreographers incline to melodrama. The young Andrey Kaydanovsky takes us in an entirely different direction. Out stroll three women in rags arguing with one another in Portugese, Slovak and Rumanian. A child appears and is scolded by his very convincing mother Ketevan Papava. Alexis Forabasco and Alice Firenze then live a passionate but very violent love affair in front of our eyes. The music moves from Flamenco to Sicilian music, latin and indeterminate. Kaydanovskiy is working hard to show us the complexity of life. The little boy appears again and then disappears. Of the three women Brazilian Rafaella Sant’anna is the most remarkable with much more swing in her hip than her European companions.

But frankly they are all good, including Ketevan Papava and Andras Lukacs in a comic turn. Dolce Vita is a sophisticated and long piece, funny and rewarding. A bit derivative of Kylian but indicating real talent for ensemble staging.

At this point, let me compliment the stage team on the eight different stages they dressed without incident.

A piece of glass in the middle of the stage. Bowls of paint behind to the left and right. Italian Davide Dato enters in mere briefs. He takes great gobs of the blue, red and yellow paint, flings it around, rubs it on himself. It’s quite dangerous for the audience as we are all well dressed and the paint is flying five metres in the air. Ennio Morricone’s music is appropriately dramatic. It all seems a bit nineteen seventies though. Identity is young Italian Fabrizio Coppo’s first piece of the evening. Whlee does better in round two.

Part two of the evening beings with louding beeping noises and flashing lights and then turns to Johann Sebastian Bach. Yes, Eno Peci is back. He does his own mixing: soundscape is clearly important to him. He feels the world technically. There’s some very nice dancing from the great group he assembled. Dagmar Kronberger shows us why she is still one of the best Austrians dancing, even if overshadowed by Harangozo’s Russian stars since returning from motherhood. Masayu Kimoto dances his heart out with Greig Matthews, Davide Dato and Alice Firenze and Kyoka Hashimoto all in support. Despite the passion of the performances, Exitium remains decorative and not quite as strong as Peci’s last pice.

Donne (women) is the name of Fabrizio Coppo’s next piece and it’s exactly that. Three women: Ketevan Papava in red, Marie-Claire d’Lyse in purple brown and Oksana Kiriyenko in a rich emerald colour. Kiriyenko represents sadness and melancholy. Her moves are purposeful and moving. Papava flames through her piece in red. Each time she appears on stage her personality changes. Her dancing is purposeful and coherent despite the agenda of passion. Vaganova trained Papava may be the best dancer working in the Staatsoper now. Why she is not an étoile is beyond me: there are far less capable dancers already carrying that stripe.

Marie Claire d’Lyse dances like a wraith. She’s beautiful and dangerous, a lovely role for her and a pleasure for our eyes.

Again with Fabrizio Coppo you feel a bit in the seventies. Had he come to ImPulsTanz with this in the first five years, he would have been the talk of the town. There is a purity to his work: if Coppo applies himself over the course of five years, it could become less derivative and able to stand on its own.

Attila Bakó’s Attingo is a solo on Richard Szabó in an all Hungarian piece. The music is from Zbigniew Preisner. While Szabó is a talented enough dancer, solos are dull at the best of times. There is nothing in the piece which is particularly bad and nothing particularly to remember. But that is what Choreo.lab is about: experimenting. Not all experiments in the kitchen turn out marvellously either.

The final piece to the evening between two worlds is in an incredible soundscape built on music from Johan Johansson and Jon Hopkins. For twenty short minutes we are truly taken to another world.

Ionna Avraam enters a long a narrow line of light. Later she dances a duo with Davide Dato where for once we forget his short legs as he melds and parts with Avraam. The lifts are high and otherworldly. Avraam truly dances, she moves beyond her body into another world. There is good supporting work again from Papava and others.

Maxime Quiroga is the star of the evening.

The other works which I would very much to have seen again include Martin Winter’s “don’t know”, Andrey Kaydanovsky’s Dolce Vita and perhaps Fabrizio Coppo’s Donne. But there are no guarantees with Choreo.lab veterans: Dan Datcu had perhaps the best piece here and subsequently left the Staatsoper and gave up choreography altogether. On the other hand, Nicki Adler a multi-year veteran of Choreo.lab got his start here and is one of the best of young Austrian choreographers now. Patricia Sollak decided to give up dance altogether and become a lawyer. The uncertainty is part of the excitement of Choreo.lab.

Alas, you won’t be able to see this program as it is a three day run and gone forever. Happily enough, the Ballet Club of Vienna filmed the performances several times and are menacing us with a video version. While dance on film is rarely the equivalent of dance on stage, hopefully Balazs and the others have captured some of the essence of these pieces.

Photos from Max Moser to come.