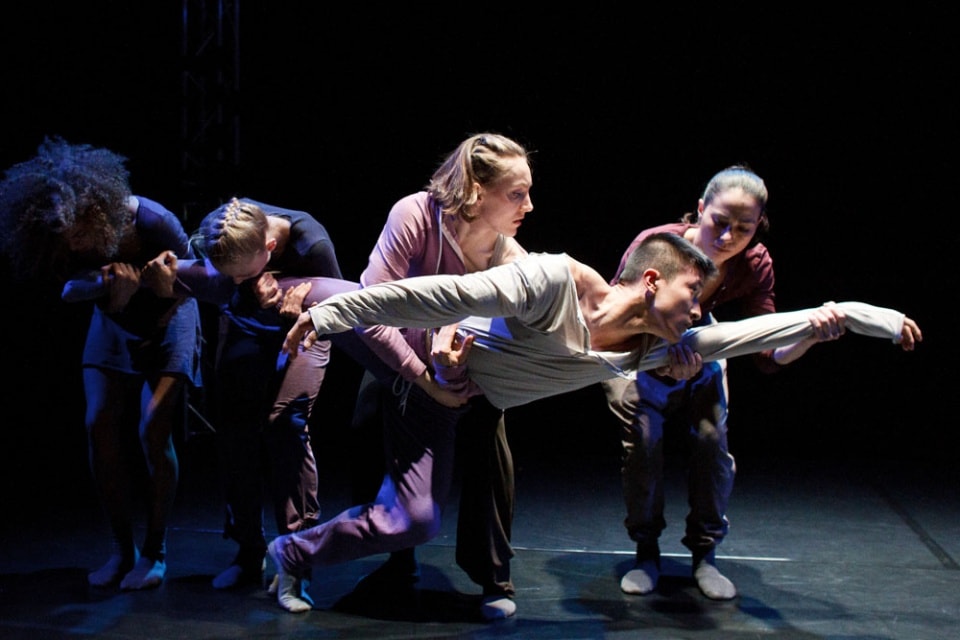 A trip to a Graz dance premiere is always a challenge. Graz Opera ballet director Darrel Toulon has been either dancing or creating dance for a quarter century, ever seeking the grail of the new.

Once again we are in the extraordinary studio theatre Wilder Mann. What makes Wilder Mann different from almost any other space is that there is no depth to the stage and it is enormously wide. Dance works horizontally instead of vertically. Alas neither of tonight’s choreographers took full advantage of the space this time: to take advantage of the space, one needs to program opposing important actions on either end of the stage. The effect in when used properly is almost like Mike Figgis’s Timecode film with four frames of action taking place at the same time.

In Deal.East.West, the something new involved bringing together two young choreographers from the two far extremes of the Eurasian continent: Shanghai native Jie Dong and James Wilton from England. Both are dedicated national artists, working respectively in their native lands, rather than from the European melting pot of choreography (French in Belgium, Spaniards in Paris, Russians in Germany).

I can think and dream about it

To be fair, Dong’s work is very much in the Western tradition of modern dance and has very little to do with Oriental movement: his masters studied in the tradition of Martha Graham, Isadora Duncan and Pina Bausch. Dong is as Chinese (or not) as Hong Kong action films. 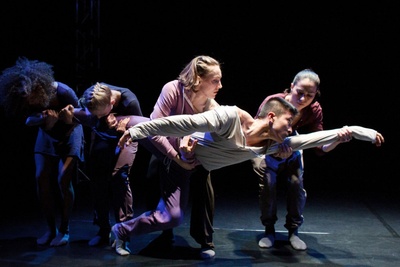 Dong collaborated with long time Toulon stage designer Vibeke who onced again offered us one her extraordinary minimalist environments in white. On the left there was an enormous three meter high white chair. Later a smaller white chair is passed among the dancers. Small elegant details which worked.

“I can think and dream about it” started with dancers rolling in white tires from the left.

Then the sound of soft breath.

The dancers formed groups and parted again, in varied episodes. At one point they sleep altogether on the ground to an an ambient soundscape. The women’s movement gently lyrical, the men somewhat colder. Particularly fine were Areti Poulaki, Laura Fischer and Jana Drgonova. Sarah Schoch exuded a stern presence and beauty but her expression varied too little to communicate much. 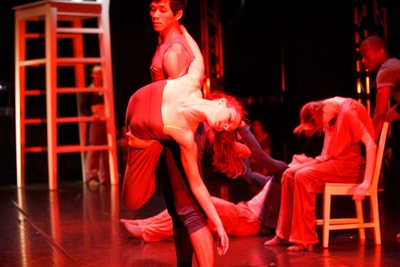 Among the men, Michael Munoz was in fine form as usual, risking life and limb to make a choreographer’s work appear more daring. Serge Desroches offered a very strong presence in Dong’s work.

There were a few aesthetic decisions which weakened the work for me. In terms of costumes, it looked like everyone just turned up in his or her pyjamas. Everyone wore some kind of loose fitting pants and musty t-shirt, with no apparent rhyme nor reason in their choices. To choose to do nothing with clothing is also an aesthetic choice. I think Dong’s intention was an insistence on natural. But pyjamas do not strike me as natural clothing. His sartorial insouciance could be more studied. A chance was missed here. If the intention is post apocalyptic, Jong could go much further than pyjamas. The one item of clothing which worked for me was Areti Poulaki’s Turkish pants which offered form throughout her jumps and lifts.

Equally strange was the big eyes everyone made all the time. Along with just a smattering of pasty whiteface, Dong asked everyone to keep his or her eyes wide, wide open most of the time.

Jana Drgonova in particular seemed like a vulnerable blonde rag doll, a creature out of Blade Runner. 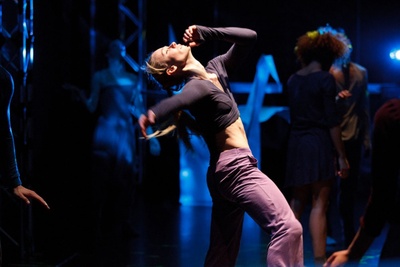 What did work were the thunder and rain sounds towards the end preceded by an episode of Chinese pop. The strange sounds both alienated us and sensitised us to the movement.

Some work with a rope binding a dancer to the others and then unbinding him made visual the ties between people, even in modern cities.

“I can think and dream about it” ends with rag doll Drgonova atop the three meter chair looking out at us as all the other dancers look up at her. The mood was reflective, the moment touching. More like the true beginning of the piece than its natural end.

The whole piece felt more like variations building towards events which never happened. Agreeable but not earth shaking. Dong does show a great ability to move the focus between groups and solos and a talent for pulling meaning from simple objects.

The second act offered young independent British choreographer James Wilton a venue outside of England where his career has taken fire since winning the Salder’s Wells Global Dance Contest in January 2011.

Wilton has no fear of taking on big themes: “Growing Divide” is Wilton’s reflection on the London riots and the class struggle in England. Wilton does not try to give us a narrative of the riots but rather explores the emotional state of the rioters. I’m afraid Wilton might be vulnerable to new English laws about sympathising with and encouraging rioters. 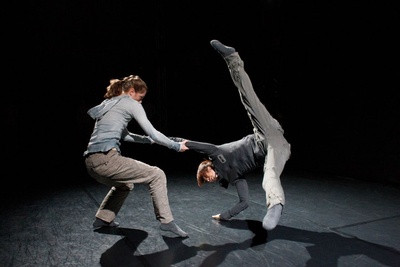 After watching “Growing Divide” one understands very well the rage of a lost English generation, victims of a class divide who have been disinherited by what appears to be bottomless financial and governmental corruption.

From the beginning, one woman stands out among the nine dancers, Sarah Jane Taylor. She enters the stage seething with visible rage. Her every movement evinces contempt, anger and frustration. Taylor’s blistering performance makes the piece.

Wilton’s choreographic vocabulary here draws largely from martial arts and street fighting. The exact lifts and pushes and overall violence reminded me of Wim Vandekeybus’s work. Perhaps there are only so many ways to kick and shove a person on stage without permanent injury. Wilton acknowledges Vandekeybus’s influence but draws this distinction: “Vandekeybus starts with emotion, I start with movement.” Perhaps. More visible is that Vandekeybus usually has some kind of prop as a starting point. Wilton outside of the minimalist costumes allowed nothing on his stage but bodies and attitude. 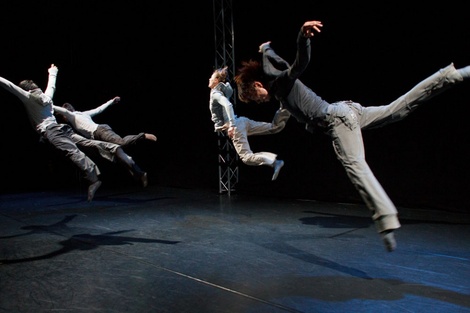 In Wilton’s case, appropriate attention was paid to costume. All the dancers were clad in grey hoodies and cargo pants, allowing them to become an anonymous group and then slip into individual personalities seamlessly.

Musically “Growing Divide” offered more variety than I’ve recently heard. Wilton offers us an Eastern melody to begin “Mugam Beyati Shiraz” but in the middle switches to a very hard rock almost metal music from Steven Wilson, “Salvaging” and “No Twilight Within the Courts of the Sun”, the latter a clever tribute to King Crimson’s “In the court of the Crimson King”. It is great to hear a choreographer using living music (Wilson’s Insurgentes was released in 2008).

For the middle point of “Growing Divide” Michál Zabavik fixes us with a fierce contemptuous stare. Zabavik dares society to take him on. Hatred in his eyes screams the anger/frustration of underemployed existence.

In some ways, “Growing Divide” is like music video choreography. Cat fights break out between the women. It is certainly not your grandmother’s modern dance.

Especially good were Dianne Gray, Nori Aoki, Biag Gaongen and Michael Munoz and Michál Zabavik. Strangely, as a dancer, James Wilton himself seemed to be a little bit at sea in his own production. His weaker physique and soft face seemed a bit out of place among the relatively hard bodies of the Graz dancers. Agnès Girard didn’t has not caught up to the fury or the precision of her colleagues. Jana Drgonova who had such touching presence in “I can think and dream about it” went through the motions in “Growing Divide”. Combat and violence are clearly not her muse. 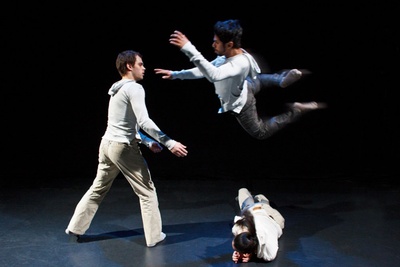 At one point Taylor does a quieter solo in a cross projected from the ceiling, both a window frame and a cross. The change of pace was welcome.

Both pieces left us wishing for a little more in what seemed a short evening.

A point of artistic interest is the more or less permanent cross pollination between Oper Graz. Guest choreographer James Wilson and his dancer Sarah Jane Taylor participate in all the Graz shows and have taken some of Oper Graz’s dancers to England with them for their own touring.

Artistic director Darrel Toulon insists that cross pollination is the way forward: “It means dancers are knocked out of their normal hiearchy and have to treat the work as fresh. They are on their best and most competitive behaviour”. Toulon also likes having the guest choreographer help grow his piece past the premiere. Toulon still regrets not being able to bring in a few of Jie Dong’s dancers from China (part of the original conception of the evening): “It just didn’t fit within the budget”.

Neither piece as electric as the Guido Markowitz’s “ Sometimes it is not nice to be me” from last year. Part of the issue may be the absence due to injury of Bostjan Ivanjsic, the incredible soloist and leader of the Oper Graz dance company. While everyone else does their best, Ivanjsic’s physical presence and charisma is not easily replaced. Hopefully he will soon return to the lineup.

James Wilton may be the future of British choreography and is certainly an exciting creator but we are in the early days still. May he retain his willingness to tackle big issues along the way. It’s refreshing to see a choreographer leaving behind both deconstructionism and maudlin love to take on the world.