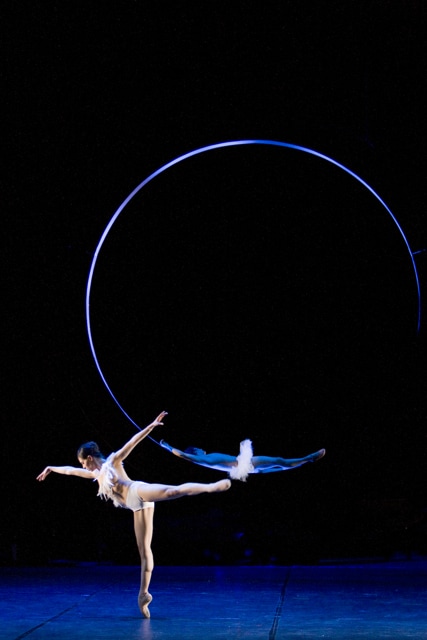 Opera Graz’s ballet director Darrel Toulon is a choreographer of ideas. For years, he created dance works which were closely related to film and included projection elements.

Much as I find Toulon’s ideas engaging, he is often more entranced with theory than my own wont. Occasionally I think Toulon would be even better happier as one of deconstructionist philosophy professors back in 1990 in Toronto. The problem with theory and dance is that dance is a tactile medium, little concerned with meta-conceits and epistemology.

If you wish to discuss the nature of being you have far stronger tools at your disposal with a pen and paper than you do with a stage full of dancers. If you wish to treat the meaning of love and the fragility of life, your chances of touching people deeply are much better with dancers and the stage than with simple pen and paper. Horses for courses. Dance is not the correct medium for literary theory or pure philosophy.

Unsurprisingly, Mr. Toulon and I deeply disagree on this subject. However Schwanen Trilogie has gone a long way to persuade me that there is a place for deconstruction in dance.

Schwanen Trilogie takes a single recurrent theme from the world of art and dance – the swan. From Tchaikovski to Sibellius to Petipa to Pavlova, many of the greatest creators of music and dance have returned again and again to the swan. What do they find in the swan which stirs them so deeply? 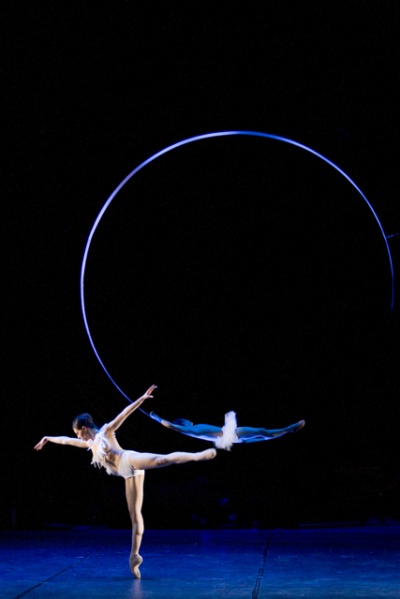 A Swan theme stirs the world of art and dance so deeply.

First, beauty and purity (either white or black, swans are not cute and colourful ducks). Secondly, a heightened mortality, accented by their long and fragile necks. Thirdly, a latent viciousness – striking hard with their beaks when disturbed.

How to treat the whole motif of Swans in a single evening? Toulon takes legends, two of which are well known and a third which is unknown. Seeking story for dance in legend is the right start.

Dance is far more about archetypes than about the hurly burly of political movement, as the Soviets learned. The only really effective dance works in socialism I know of are The Stone Flower and Spartacus. Stone Flower is a legend. While on the surface, Spartacus is a political drama, it is another version of the Christ story, of a man who sacrifices himself for the greater good, of people who lose their freedom due to their inability to control their appetites.

The three stories chosen by Toulon include Leda and the Swan, where Zeus comes to Leda in the form of a swan and ravishes her.

A Finish fairy tale, Lemminkäinen in Tounela, tells the story of Lemminkäinen seeking the hand of a swan maiden.

Odette/Odile is the leitmotif of dance. Indeed my own life long engagement with ballet is a direct result of seeing Tanya Chernobrovkina incarnate this role in the Stanislavsky-Nemirovich-Danchenko Theatre on Pushkin Street in Moscow in 1989. Had I not seen this work, I may never have understood the power of dance in general and ballet in particular.

Tampering with Swan Lake is fraught with danger. Any change you make is likely to be a significant diminishment of the original. By standing next to genius, your temerity to change it for the worse only bores the audience and makes you look like a fool.

Ironically enough Schwanen Trilogie begins with a bar and dancers doing class. Self-referential obligatoire. Fortunately the women are beautiful and the music is live. Live music is to dance as fresh air and fresh water for animals. 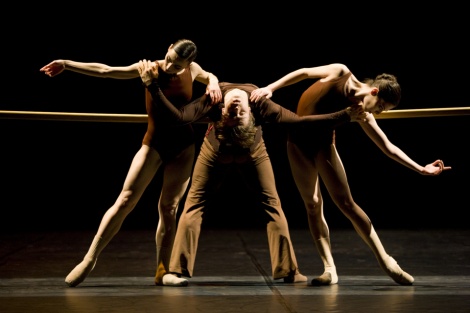 The women are beautiful and the music is live.
Live music is to dance as fresh air and fresh water for animals.

The bar is gone and the dancers gather in groups and pairs and dance as swans. Particularly remarkable here is Bostjan Ivanjsic. Although in a secondary role, behind Ardee Dionisio and Michal Zábavik, when Ivanjsic is on the stage he dominates it. The movement is often a play on the movement of Swans but fortunately Toulon does not get bogged down in bird movement but follows the emotional lines between the pairs.

This section tells the story of Leda and Zeus. The costumes are minimalist, here reduced versions of the brown tunics from the bar class opening, the men half-naked.

The middle section based on a story in the Finnish mythology Kavala (think Beowolf and The Odyssey together but in Finnish language), the story tells of Lemminki’s attempt to win the hand of a swan maiden as his wife where he drowns. His mother goes into the underworld to collect the pieces of his body from the river of Tuonela and is able to sew him back together.

The second half opens in a spectacular way. As the curtains open lights come up we see enoromous white eggs gleaming in the darkness.

Dancers come onto the stage and lie on the eggs and dance around the eggs and more swans come from inside the egg, springing full-grown into dance themselves. 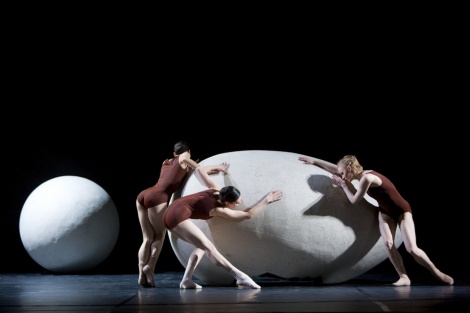 The second half opens in a spectacular way.
Enoromous white eggs are gleaming in the darkness.

Just the large Graz Opera stage, darkness and subtle light. Film is but a pale shadow of this three dimensional beauty. Toulon was long obsessed with bringing film into dance, but has at last harnessed the power of the pure stage with his collaborators Anne Marie Legenstein and Alexandra Burgstaller (stage design and costumes) and Klaus Zimmermann (light).

The stage is all dark as huge eggs are rolled in. From the eggs emerge dancers as swans born adult.

The three stories segue into one another and reflect one another. Both part two and part three could stand alone as short ballet in themselves. The evening is richer for constantly returning to the same question – the innocence of love and the swan again and again from different angles.

I remember from the end seeing Michal Zábavik as Rothbart. He is supposed to be conjuring the wind and the rain against Siegfried. There was something so indolent and self-satisfied about his movements that the moment was broken. Throughout the evening which he should have been leading (in part one Zábavik also has the role of Zeus), he seemed better cut out for the role of fashion model than dancer. He posed more than he moved and spent more time flicking his long hair out of his eyes than dancing. Zábavik has had other major roles in the Graz Opera so I can only assume I was not seeing him at his best. 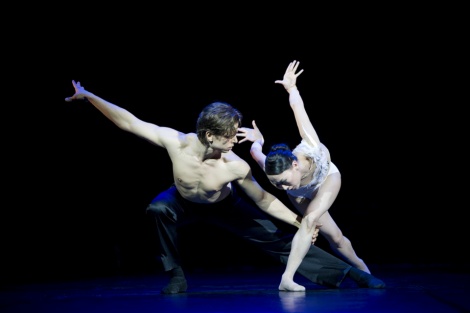 Returning to the same question –
the innocence of love and the swan again and again from different angles.

Clemmie Sveaas from England was one of several Brits shining on the Graz stage. Her Odette was charming if not earth-shattering. Compatriot Benjamin Griffiths as Siegfried in a Tutu was so incredibly sweet like candy with his perfect features and delicate dancing.

Jana Drgonova was remarkable both for her beauty and the intensity of her performance as both a grace and as Leda. Perhaps the indifferent Zeus of Slovak compatriot Zábavik let down her own work some little bit.

What does it all mean? I don’t know and by the end, I’m not sure it matters.

If one takes Toulon’s word for it, Schwanensee Trilogie is about mortality and human striving for spiritual transcendency. Perhaps, but it’s difficult to put into words. Schwanensee Trilogie is that and much more. It’s the kind of dance work, which you want to see two or three times before analysing. Happily I can recommend the experience: Beauty and mystery await.