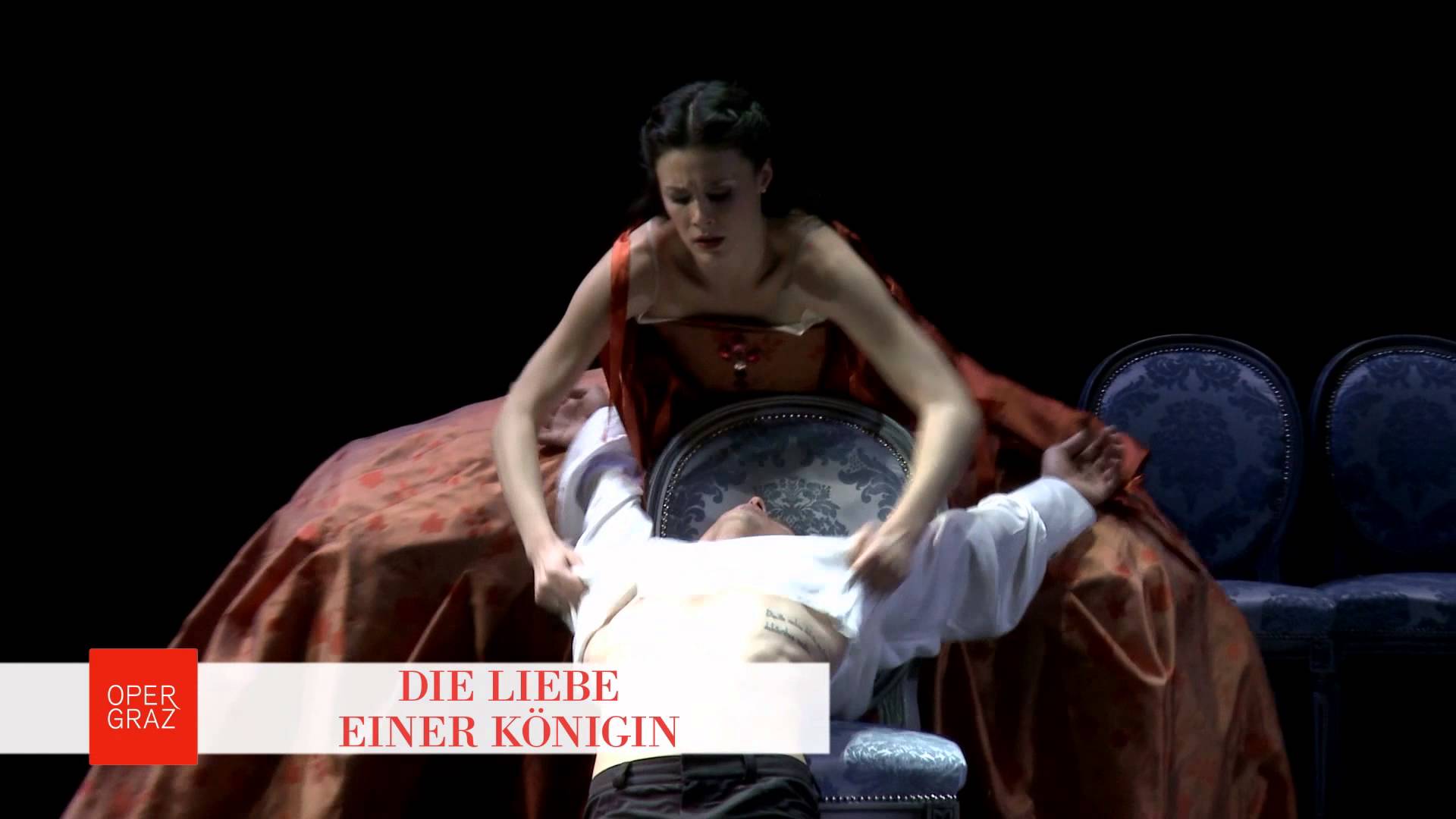 The staging starts off with a bang: an almost constantly slowly rotating stage symbolises the movement of time. We see the betrothal of the children, Caroline departing reluctantly from England, her ceremonial arrival in Denmark greeted by a mad husband. The colours were fabulous with the whole court in a radiant royal blue which symbolises both frivolity and power. Elke Steffen-Kühlnl’s costumes were excellent, both looking regal yet allowing free movement.

A highlight of the court is the use of real old people in the white wigs, frock coats and long gowns. So often these roles are played by either current dancers or ex-dancers who communicate nothing of the stodginess of a court. The portly fellow who could hardly walk with puckered thick lips and sneering brow made every court scene a sour delight.

Albert Garcia as the king does his best at madness, but we rarely fear him. He’s missing the absolute abandon, the wildness of high. I was somewhat surprised not to see Bostjan Ivanjsic in this role as he would have no difficulty communicating true madness. There is not much dancing in the king’s role so I can really only judge Garcia’s performance on the drama.

An early episode in court includes live piano, with cello and song. Bringing the music live on stage was another great touch. Musically the evening was splendid. The orchestra played Sergej Rachmaninow sumptuously under the musical direction José Miguel Esandi.

Michal Zabavik is a darkly charismatic Strauensee but seems to miss the real Strauensee’s high idealism. The love scene between him and Martina De Dominicis goes in circles, without the intense passion that one would expect from people breaking all societal bounds. In the Danish film, the slow conversations, rides aparts and society dancing which precipitate the affair work much better. Many men and women are much sexier at home than the dance cast on this pair. Both Zabavik and De Dominicis made their best effort with what they were given.

We are treated to the hypocrisy of the court as the state council personally encourage Christian’s whoring to weaken him.

The end of the first half is the high point of Die Liebe Einer Konigin. Christian, Caroline and Struensee climb atop a seven meter wall and sit there together staring down at the audience and laughing among themselve before the curtain falls.

The second half speeds along at lightning pace. Hardly has it begun than we find Strauensee in bonds, taken away and shot.

In the meantime, Michael Munoz as the leader of the conservative faction had a few splendid scenes with backflips and somersaults. Munoz has always been the small dancer who could and he made the most of his role and the evening. Ambition and evil energy thrilled his every movement. Munoz’s scenes were the highlight of the evening.

Lady in waiting Agnès Girard was splendidly imperious. Her good counterpart in the role of Elisabeth von Eyben, Dianne Gray moved us deeply with her devotion to her queen and friend. Kristina Aleksova as the Dowager Queen offered a dark and coldly beautiful presence. When she had the opportunity to dance she made the most of it.

The final dream scenes of the deposed Caroline with a still living Strauensee, trees in the background, a happy daughter offered a world beyond the literal or straight metaphoric. Beautiful stagecraft and quite moving. Excellent work from stage designer Jürgen Kirner and choreographer Toulon. I wished for more of this.

An evening like Die Liebe Einer Konigin reminds me of the work of choreographer Jochen Ulrich, who sadly left us last year. Ulrich was always searching for a rich story and rendering it in dance. A frustration of mine with Ulrich’s work (which has carried over into much of Toulon’s work) is the concern with symbols. This evening it was books. There are books strewn all over the stage and books held in people’s mouths and people beaten with books.

Such a metaphoric approach with physical objects to my mind traps the dance. Juri Grigorovich, the genius behind Spartacus and Legend of Love, approached dramatic scenes very differently, always seeking a pattern of movement to communicate the idea.

Die Liebe Einer Konigin is a beautiful evening, with great music and excellent performances. The story is ideal. Somehow though the great ideas and strong feelings get lost in stage business. Instead of life changing, the evening is clever and beautiful, an opportunity lost. Given how few choreographers even aim at the big targets anymore, I am grateful to Ballet Graz and Toulon for at least reaching for the stars.