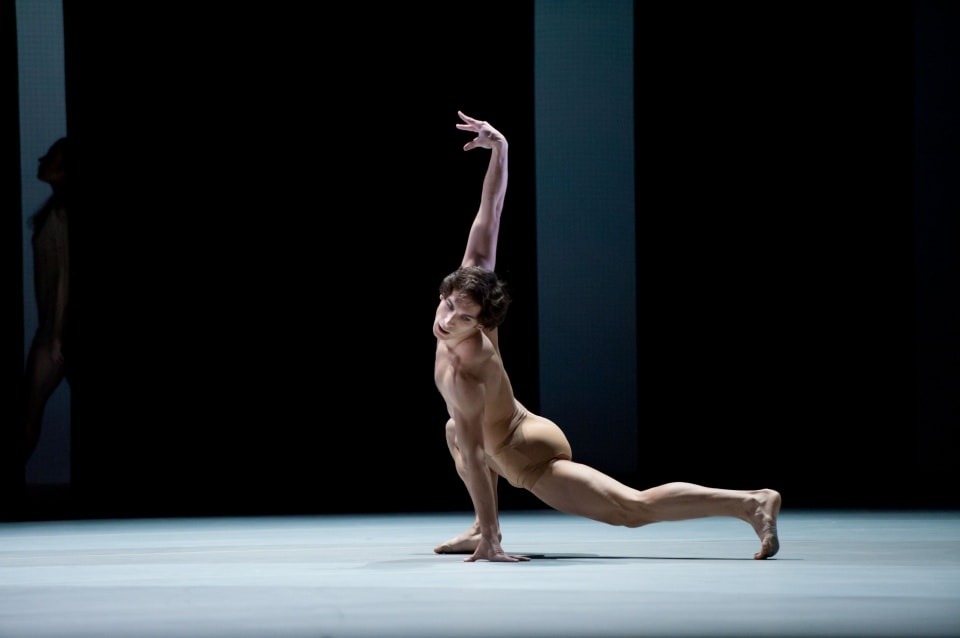 Afternoon of a Faun, Bolero and Carmina Burana are Volksopera’s dance corps chance to shine outside the shadow of the main ballet.

Afternoon with a Faun immediately brings memories of Nijinski, the famous photograph. It’s a dangerous standard to lance against. Choreographer Boris Nebyla has never lacked courage and plunges straight in. The stage is spare with just four white ceiling to floor breaking the all black stage, light slips through from behind. At the front of the stage, Mihail Sosnovschi poses front foot under him back leg extended. His powerful physique impresses right away. Sosnovschi strikes a series of poses to Debussy’s music, sometimes balletic, sometimes more from a bodybuilder’s show. 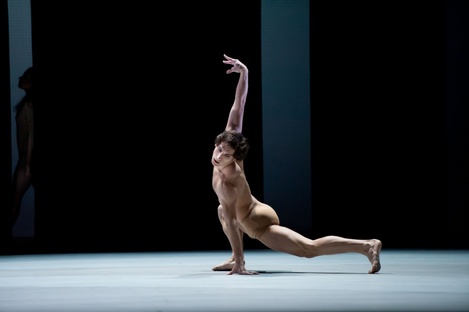 At this point, one is optimistic about the duet to come. Lovely Brazilian Tainá Ferreira Luiz creeps across the back of the stage between the columns. Her hair is dyed a flaming red and she is clad in a flesh toned body suit.

The pair now pose together and interact in some sort of flirt. It’s all strangely sexless though. From here Afternoon of a Faun just meanders. There’s a hint of hope for some flames when Luiz with her legs extended backwards and on her stomach with Sosnovoschi above juts her hips into the floor three times, as if making love but it’s just a tiny spark in a very tasteful but too benign Afternoon of a Faun. 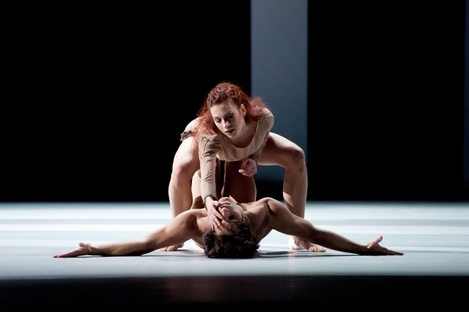 Bolero is the creation of András Lukács, Hungarian wunderkind of the Harangozo’s regime. Lukács is almost all grown up now and toils no more for choreolab but for the main stage. No excuses now.

In tackling Bolero, once again the choreographer is taking the measure of a musical work greater in the imagination than anything he or she could create.

Cleverly Lukács opens with a closed curtain which is slowly pulled up by a very beautiful Gala Jovanovic, clad in a long black skirt and a set of black beads. Underneath the beads there is a body suit alas. Without the bodysuits, Jovanovic and Lukács could challenge the music. But they’d need another six or seven women up to the occasion. 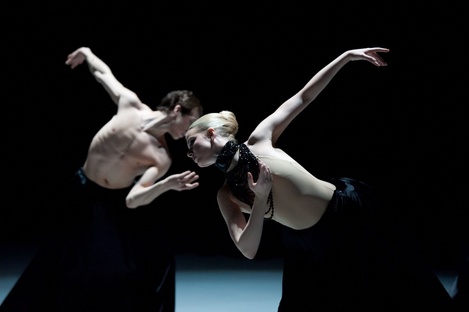 Excellent work on the costumes by Mónika Herwerth.

Gradually the stage fills with other dancers, the men stripped to the waist and in the same long skirts, all the other women in black beads. They cross in impressive, elaborate patterns, their footwork as sensual as Afternoon was cool. 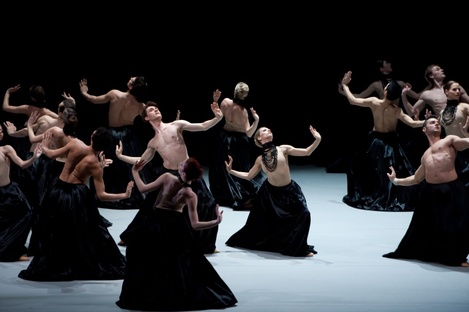 The half naked men in skirts cut a more imposing figure than the women, Lukács mixes the dances up between monosex and mixed. As Bolero flames up, the lifts become more challenging, the movement more compelling. An effective slow build which culminates in the whole group quickly disappearing. Again Jovanovic is left alone on the stage, this time at the back in a space between the curtains. The final horn sounds and she slams shut the curtain.

The manoever shows just how much mileage a clever choreographer can get from a minimalist staging.

The audience erupted in felt applause this time, partly for the music and impressive performance of the orchestra under conductor Guido

Florian Hurler stood out among the men for both his physical size and his interesting presence, daring the audience to love him. We saw again Felipe Vieira from choreolab but for some reason he seemed more timid today.

Nothing prepared us for the insanity after the pause. Volksoper Ballet Director Vesna Orlic took her own run at one of the greatest pieces of music ever, Carl Orff’s Carmina Burana.

The curtain opened to a full choir of seventy filling the entire backstage singing at full voice. Front stage stood a figure in a long dress with forty centimetre bee’s bun hairdo. Under the makeup, stood again the enormous Florian Hurler. He threw his hands up in the air summoning the gods. At this point, around his feet half-dressed figures as if from Spartacus rolled and thrust their legs in the air around Hurler.

As the choir belted out Valkyrie levels of sound, Hurler strutted and posed as if descended from the heavens. The closest pop culture equivalent I can think of is the aria from Fifth Element but that scene is largely insufficient for this enormous stage of music and movement.

The pace did not let up from there. We moved from choral scenes to arias and back again.

The tableaux gradually leaned towards Daliesque: at one point a four metre cross is carried on stage by ten tall collared monks. They put it up and it turns out to glow neon red. The monks sing as a choir around a dinner table on which there is a huge silver roast cover. They slash knives and forks together. The lead priest pulls the silver cover off the food to reveal the very fat head of another opera singer, who sings as if decapitated from the middle of the table. When he is done, the monks cut his head to pieces and eat him alive. Immediately afterwards ten black haired prostitutes run in in garters to fornicate with the monks, who turn out to be wearing can-can dresses under the habits.

The Catholics in the audience sat in silent bewilderment but atheists were happy to see organized religion get its nose tweaked again before the naked bride showed up, as a man dressed in only a black tutu danced the black swan part from Swan Lake, brilliantly danced by Samuel Colombet, reprising a role from a short piece in choreolab three years ago.

The stage turned to reveal an audience of twenty men on benches who had arrived for the black swan’s live sex show with the lady in red, danced by a very seductive Gala Jovanovic.

Immediately thereafter strolled out sixty white clad children hopping and skipping. Then they too broke into high song.

There was smoke, there was fog. 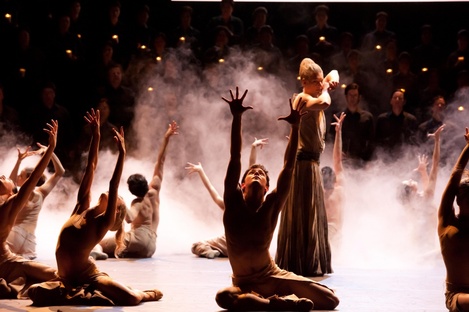 If all this sounds unbelievable it was. You’d have to watch Orlic’s Carmina Burana half a dozen times to unravel all the Dali moments. There was an old man and a woman leaving to death, admirably portrayed by Gabriele Haslinger and Percy Kofranek. There was a young couple who took their place. 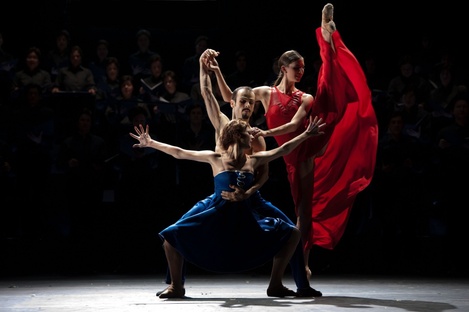 The end was as powerful as the beginning as Hurler returned in his floor length gown, his powerful arms thrust into the air to summon again the gods and bring an end to this tormented and spectacular evening. Once again limbo’s ghosts rolled around his feet.

It has been many years since I’ve seen such an ambitious production in Vienna, let alone in Volksoper. The closest equivalent was Jan Fabre’s Blood on tour at Tanzquartier.

Karl Regensburger intendant of ImPulsTanz summarised the grandeur: “a spectacle on a scale to greet the departure of Greece from the Eurozone”.

Musically I must mention the soprano work of Beate Ritter. Her voice is heavenly. The male soloists offered solid performances, but Ritter’s voice was the musical highlight of evening, together with the whole choir.

My only concern is that I don’t know what Vesna Orlic can ever do to top this her first full evening piece.