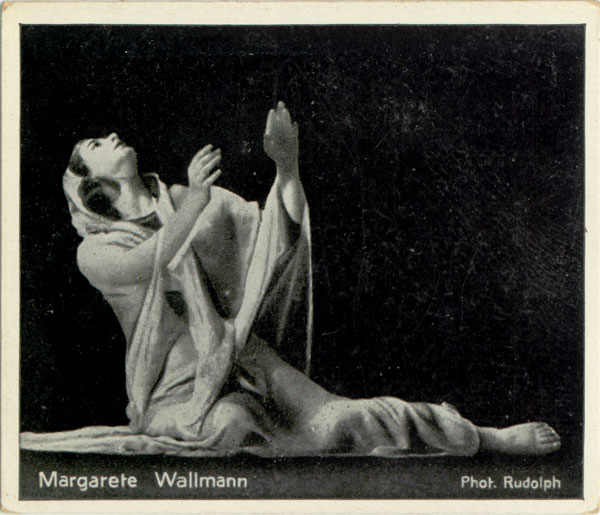 Margaret Wallman had a strange and wonderful life. Where others would have seen curses, she found blessings. In 1938 where she was the very popular ballet director, the Direction of the Vienna Staatsoper summarily dismissed Wallman on the grounds of her Jewish origins.

Wallman hardly missed a beat. She emigrated to America but ended up in South America running her own dance company for some of the happiest days of her life. When Europe had stabilised after the war, Wallman returned in 1948 to Milan. Her prolific career as an opera director took Wallman regularly to Salzburg and Vienna.

For the Berührungen festival, choreographer Renato Zanella, another former Staatsoper ballet director, decided to tackle Wallman’s not uncomplicated life story. Zanella’s path through Wallman’s life is impressionistic, sketching out what Zanella believes are the key moments of her spiritual and creative path. 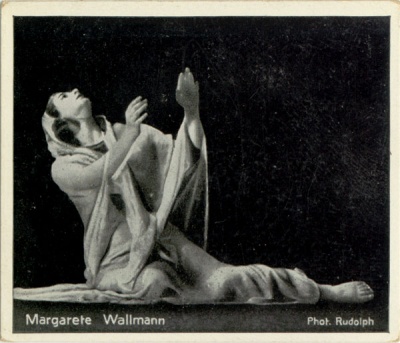 Margarete Wallmann in her days as a dancer

In some ways Wallman’s story is Zanella’s own. Arrival in Vienna, quickly rising to the pinnacle of power in Vienna’s dance world (director of Staatsoper Ballet), years of glory, followed by summary dismissal. We will see if Mr. Zanella will enjoy the triumphant return which Wallman had. In any case, Zanella seeks to emulate Wallman’s resilience, which is a good a model for how to live life under duresss as any.

As one enters the Odeon Theater, one of the most beautiful dance spaces in Vienna, the lights are low and blue. There is neither curtain, nor wings, just the Attic form of the arches of the back wall and the exposed brick. A good aesthetic choice. To try to outdo the built-in decorations of the Odeon is an almost futile and very expensive project . From within places in the audience, a well-dressed man sings out an opera aria. Somewhere else a young woman in a gown stands up and answers him.

Finally a woman in an elegant dark dress, white gloves and high heeled shoes comes out and dances for us – the splendid Jolantha Seyfried. At first she is stilted, until she takes off her white gloves and finally her shoes. At this point, she dances freely and somewhat wildly. At the crescendo, eight dancers run out from the audience and hurl themselves on the ground. 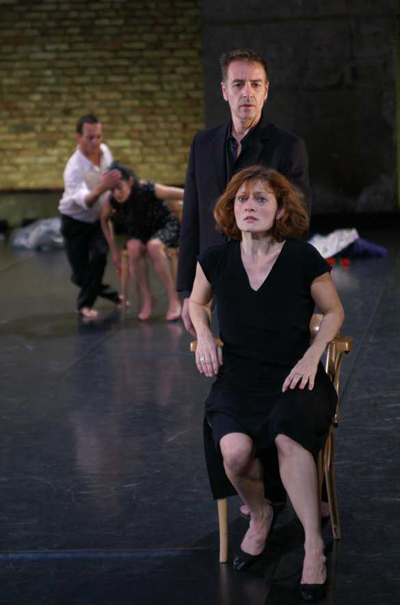 As they rise, Wallman’s alter ego, throws herself to the ground in a strange kind of despair.

Convincing enough aesthetically, but difficult to understand the motivation.

For the rest of the performance, we have a strange mixture of Wallman’s voice booming through the theater in interviews or readings telling us about her ideas on dance and life alternating with small dance interludes. 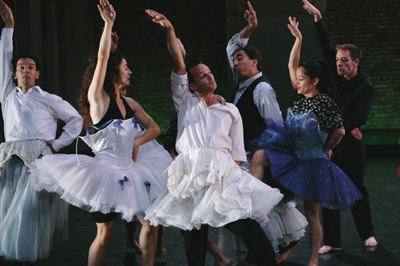 The extracts from Wallman’s philosophy as a rule were profound and engaging.

This structure would have been successful if the dance had made sense or fit better together. Often the choreographic episodes seemed to have no connection to the text. All the dancers at one point smash red spaghetti under their tall black military boots. I suppose this symbolized the destruction of Austria at the hands of the Nazis.

The music was inspiring from the opening a capella arias through the South American lyrical singing symbolising Wallman’s time in South America to incredibly moving piano segments from Arvo Pärt.

I know Zanella is a stronger choreographer than this from his Rites of Spring. I don’t know why he chose to make Wallfrau more like dance theater. After working with the Staatsoper for so many years, perhaps he is shy about allowing lesser dancers as much movement?

Zanella’s own path is an interesting one. He is much changed from his time as Staatsoper ballet director. To begin with he is much thinner. I remember seeing him after Choreolab 3 for the first time. Choreolab 3 was in an old stables/sport hall and a very romantic and exotic evening as there were vintage sports cars back stage from Patricia’s piece. Renato Zanella was at the height of his powers, enjoying artistic success with his own choreography and not yet touched by rumour or intrigue.

He gave a long speech about the dance and the company in measured and fluent German. I was astonished by this Italian man’s command of German and how he had made his way in Vienna. I thought to myself, if only I could speak German as he does and make such a road for myself, life would be perfect. I do speak German now, although certainly not as well as Mr. Zanella – but have finally learned the hard rule that life is never perfect. When life is very good, that should be more than enough. Other rules: watch your back and never believe that you are more than furnishing for the pageant. Life will always go on with or without you.

Without the trappings and weight of power, Mr. Zanella does not speak in such a measured or grandiose way anymore. Instead he speaks quickly, in torrents of thought overflowing with ideas. But there is light rather than power or cynicism in his eyes. The best word those who know him put to his new aura is authentic. The artist has returned where there was sometimes only the pathos of the ballet director (almost all ballet directors suffer from this same pretentious and rather unattractive pose, only the great ones like Yuri Grigorovich avoid it)

When one takes Wallfrau in its context – the lives of Margaret Wallman and Renato Zanella – it is a profound work on the essence of creative life and glory. On its own, Wallfrau is perhaps too complex, too symbolic and too confusing. There are very few great moments in the piece – sadly Mr. Zanella did not put his considerable choreographic talents to work. There is no dance in the piece worth remembering. Wallfrau is more of a multimedia college with movement.

At the end, I felt the complexity of the subject shouts out to be made as a documentary film (or even pseudo-documentary with re-enactments mixed with period footage) rather than a piece of dance.

But the audience was more appreciative of Wallfrau, Zanella and Jolantha Seyfried than what I’ve written above would suggest. There was almost endless applause to an infinite number of sortays by the performers and even Mr. Zanella. But this audience was comprised primarily of ballet professors, choreographers and other Vienna dance cognoscenti. They knew the back story, they knew the context, these were there legends, this was their world. In a sense, Wallfrau tells a story by which generations learn of their forefathers – a kind of biblical recitation of names and events. A necessary historical art but not Greek tragedy nor Shakespeare.

Thanks to the energy of the company, their focus, the music, the incredible space, Wallfrau was a much better evening as an experience than when broken into pieces. Renato Zanella is not one to count out. Now that the weight of administration is no longer on his shoulders, he seems to have found his muse again.