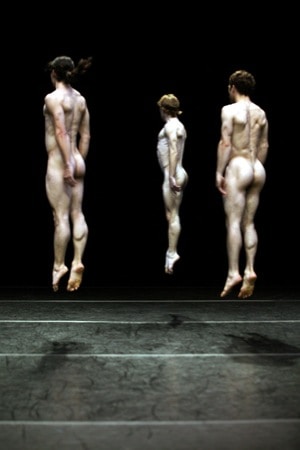 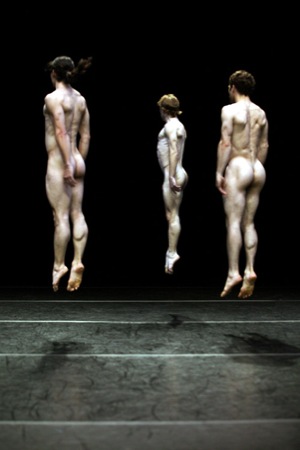 Another one of the poster productions of this year’s Impulstanz, Daniel Leveillé‘s new work is graced not only by the strong image of three naked men flying but also by a chillingly poetic title The Modesty of Icebergs (La pudeur des icebergs). I expected the most.

In the splendidly intimate Akademietheater, The Modesty of Icebergs was very slow to start. The dancers did not come into the half-darkened hall until quarter after nine.

Three men strode out from the back right corner (Mathieu Campeau, Stéphane Gladyszewski, Emmanuel Proulx). Totally naked as the poster promised. They promptly set themselves out in a staggered row of three and began to pose. It was like some sort of strange body building contest where they pliéd and puffed-out their chests in strange half squatting positions.

The piece is difficult to describe as there was no particular narrative but rather a cyclical repetition of the same movements with an ensemble comprised mainly of three men but augmented at times to as many as five men and one woman (Ivana Milicevic).

A highlight of the dance for me were the series of leaps the dancers made onto one another’s hands. Sometimes the other dancer would push the leaper backwards across the stage in the air, as if he were flying. Other times, the dancer would leap up on top of the walking dancer suspended by their own hands on shoulders and the hands of their carrier directly vertical at the midriff. The dancer would be carried clear across the stage in this dramatic pose. If you’ve ever seen someone portage a canoe, you will have some idea of the geometry involved.

Others were very moved by a piling on of bodies in which they found some emotional succour in the rather cold show.

One becomes accustomed to the full male frontal nudity in a positive way. All the dancers are fairly ordinary looking men (mid-way through the piece a curly haired man with huge limpid eyes and a lush mouth appears like an overgrown cupid, as the exception to prove the rule). Some with rounder butt cheeks and more robust chests, others with more slender grace, but authentic looking men. The investigation of male form is intrinsically fascinating, as it is so rarely done. In most professional sports like hockey or even baseball, the participants are so attired as to reveal little. This is one of the great attractions of basketball as a very popular spectator sports for women. But event there the motion is repetitive quick and not especially revealing.

Yet a consistent low point in the choreography for me was an insistence on the male sphincter by Daniel Leveillé. There were three poses in which we were obliged to confont our dancers’ crack in the most intimate way possible. One in which the dancer turns his back to us, bends his knees halfway and then bends over towards the floor. This was perhaps the most off-putting. Another was when the dancers lowered themselves to the floor in splits and then rolled over on to their backs and finally used their hands to spread their butts. The third was to place the dancers again back to us, but kneeling on the floor, butt directly towards us.

Frankly, I found this emphasis on the anus distracting and worse the revealing poses highly contrived. Unpleasant artifice in off-topic sensationalism. A half-hearted descent into male pornography with no link to the rest of the piece. Apparently these are poses which baboons will make in pre-combat situations. Perhaps Leveillé was trying to recall our primate origins.

The music was repetitive – exclusively fragments of Fédéric Chopin’s Préludes op. 28. There were long passages of silence. The silence allowed us to hear the dancers movements on the stage very distinctly which offered another rhythm to the ear.

I found the alternation between silence music very stimulating. On the other hand, Chopin and silence can be a powerful somnificant. 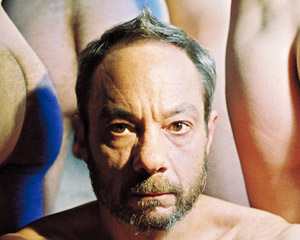 Towards the end of the piece the eye contact between dancers becomes ferociously intense, as if they were consumed by hatred or envy of one another. I did not quite understand their sudden emotional intensity.

As an étude on the male body, as an exploration of certain types of movement, Daniel Leveillé’s The Modesty of Icebergs does not dissapoint. But somehow the whole is less than the sum of its parts.

A well-written and enthusiastic Montréal review Naked Angels.
A concise quality video extract from The Modesty of Icebergs.