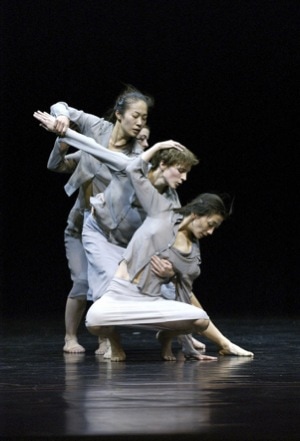 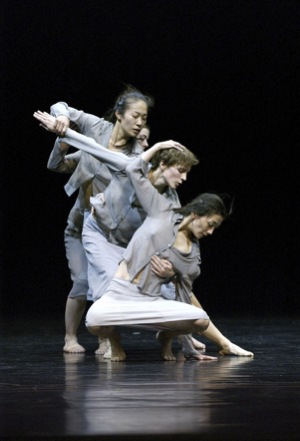 I first saw Fuga-Ce or at least the core of it two years ago in the Vienna Volksopera. It was an impressive piece of dance. There were works by four of the best of independent dance in Vienna that night (Tanztheater Homunculus, Tanz Hotel and x.IDA were the others). To my mind the Tanz Company Gervasi piece was the stand out.

His dancers were so fast and musical. The interweaving dance that Elio Gervasi had wrought for them left not a moment of idleness to the mind. It was like watching shooting stars. If one were to blink one would miss so much.

What is at Impulstanz this year is a revision of Fuga-ce with the collaboration of Catherine Guerin, a choreographer well-known in Austria for her collaboration with the Graz Opera and Tanz, Graz ballet director Darrel Toulon.

Fuga-Ce is the second Guerin-Gervasi collaboration. Earlier this year, Darrel Toulon brought them together in Graz to create Metamorphosen in Graz. In Graz, there were three choreographers to work on Metamorphosen (Iva Rohlik was the third). Unlike shared choreographic programs, Metamorphosen was not divided into distinct sections for each choreographer but was a single show. All choreographers had full input at all times in the creation of the final composition.

I had the privilege of seeing that experiment in group authorship earlier this spring and could see some of Elio Gervasi’s phrasing in the composition but do not know the work of Catherine Guerin or Iva Rohlik well enough to distinguish their contributions. While there were some fine moments in Metamorphosen, as a whole I found it not entirely coherent choreographically, made up of mismatched fragments. I laud Darrel Toulon’s audacity to always find a new way to approach the choreographic art, whether by retreating cinematic stories in dance, turning the grand classics on their head with his small company or in this case attempting multiple authorship. As with many grand experiments, success is not always assured but there is something to learn from the process.

That is to say, it is extremely interesting that Elio Gervasi and Catherine Guerin have chosen to continue the experiment of creation by multiple choreographic hands of their own free will. No longer is it the idea of the artistic director hiring them.

The version of Fuga-Ce at Impulstanz is much longer as it is now a full evening piece as opposed to one of four small pieces. The aesthetic is much looser. There is a comparatively elaborate set with three metal panels at the back of the stage and dozens of wooden blocks with metal rods sticking out of them. The costumes are no longer monochromatic grey but a variety of sombre browns and reds and blues. 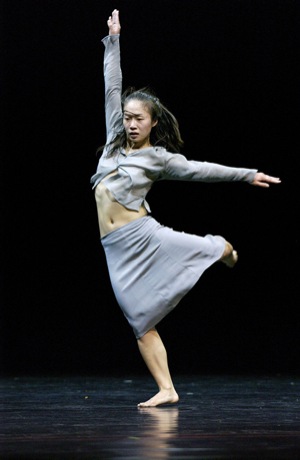 There are six dancers instead of four. When there were four they were almost all close to the same height and proportions. Most disconcerting about the additional dancers is that one is much taller than the others and one is much smaller. The symmetry of the earlier production of Fuga-Ce is gone.

What was improved this year was the addition of live music to the performance with the Keller Quartet at the Akademietheater performance. Sadly in the showing at Arsenal there was no live music.

The lighting from Markus Schwarz was excellent. Studio One at Arsenal is the same empty space in which Philipp Gehmacher’s incubator took place with all the atmosphere of an empty aircraft hangar. For Fugua-Ce, Schwarz had managed to put in a full lighting rig.

When we entered the hall it was almost dark and we had to find our places carefully. He finally brought the house lights down and then brought small pools of light up all over the stage, nine in all revealing the strange forest of metal sticks in wooden blocks.

The dancers moved to one pool to another. Sometimes dancing whirling solos, sometimes dancing fantastic and energetic duets. With the size differential some of the dancers seemed to take on a male role and a female role this year.

All the dancers, as is wont with the Tanz Gervasi Company, were very good. Elio Gervasi’s choreography is very quick and demanding of the dancers. Leonie Wahl showed extreme speed and vigour and perhaps more precision than at the Volksopera. Tae Hee Kim was exceptionally smooth and strong throughout the piece. Esther Kollers danced with characteristic grace and lightness of touch.

Of the new dancers, the tall one seemed somewhat out of place. While very athletic, she lacked the precision and softness characteristic of Gervasi dancers. The new blonde dancer seemed a little bit cold and to think her way too hard through the piece. The final new dancer – while too short for the company – revealed herself to be fluid and passionate in her movements. The fire in her movement was a welcome addition to the rather cerebral emotions of Fuga-Ce.

In the tendency of almost all of the productions at Impulstanz this year, the revised Fuga-Ce could not pass up noises from the dancer. At the end of the extended choreographic meditation on Bach, Leonie Wahl stands on her head. After a moment on her head, as the other dancers slide away into the darkness she begins to occasionally bark. Two minutes later she drops down into a crouch, takes a Russian looking fur hat, pulls it tight on her head and scrabbles away into the dark, some sort of peculiar gollem creature or perhaps a homeless person.

All of these additions of dancers and metal forests and different colours in the costume and barking on one’s head did nothing to add to the piece for me. But nor did they deprive a very strong work of its core – smooth and dramatic dancing from a musical and fluent troupe.

A refreshing change from the comedic sketches and experimental theatre under the dance banner this past week.