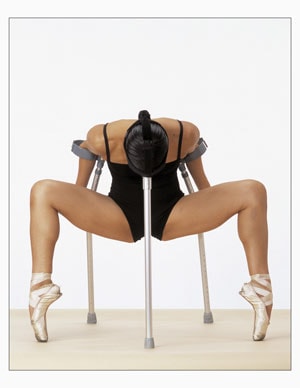 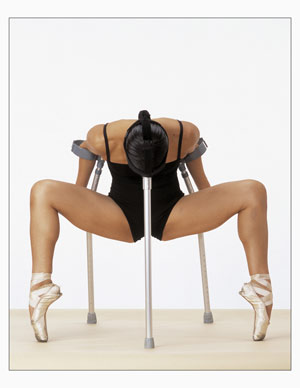 Expectations were high. Befitting its first rank status, Companie Marie Chouinard was on the main stage in the glamourous Burgtheater where the Opéra de Paris performed. There wasn’t an available ticket in the city.

From the moment you enter the auditorium, you are aware that this is perhaps not exactly the surroundings that the work call for as the curtains are open. On stage stand two gymnasts bars laid perpendicular to the audience.

The show starts with a fizzle. The house lights stay up. A single man comes on to the dark stage with poles in his hands. He mounts the first exercise bar and walks along it, using the poles for balance. He leaps to the next exercise bar and finishes his walk.

He disappears and the bars are taken away by stage hands. The stage is still dark and the house still light and we are moving towards 21:15. Plenty of opportunity to observe one’s neighbour. The audience doesn’t know whether to speak or be silent.

Finally some very dim light comes up on stage and the houselights are dimmed. We still must strain our eyes to see events on stage.

Naked women start to wander covered only by some white bandages. Each one is hobbled in some way. The first one is rolling along on a kind of dolly. The next one wanders with one foot on pointe the other in a flat shoe.

Another rolls on naked on a strange kind of single-legged metal tripod/seat. Two women cross the stage with their inside legs tied together, as a three legged beast.

At one point, Chi Long crosses the stage on mini-crutches on her arms, somehow managing to move and dance with her legs almost horizontal behind her. Her technical demonstrations established her in my mind as the most accomplished of all the Marie Chouinard dancers. I believe she is the one in the poster image as well.

Somewhere else we have dancers on trapezes walking over other dancers. The trapezes are done up some sort of futuristic S& M rig.

For the most part, the dancers are naked except for the thin bandages wrapped around their torsos and groin (they do wear skin tight flesh toned shorts which for the first act were almost invisible although more perceptible in the second act).

The dressiest part of the costumes are the tight chignonnes that all the dancers wear with a central hard spike going almost vertically up, a cross between Princess Leia and a military hemlet.

The music for all this is either Bach’s Goldberg Variations or some sort of atmospheric drone with what sounds like sampled and heavily distorted Glenn Gould intoning "I would never argue in favor of an inflexible musical policy". The Bach portion is definitely Glenn Gould’s performance. The remix is the work of Louis Dufort. By the end of the show, I wasn’t sure how much Mr. Dufort had managed to add to the original.

A little later in the first act, the whole troupe comes on (there are only ten dancers) and cross the stage with their peculiar crutches and walkers, each taking sharply resolved and slow steps with arms and legs, a kind of ant walk. The overall alien effect reminded me of the bugs in Paul Verhoeven’s Starship Troopers. 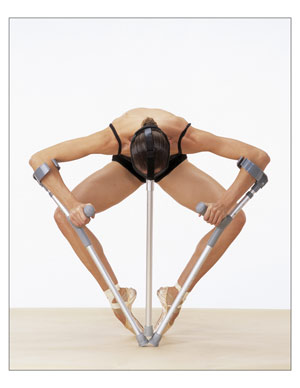 There is a costume change and much of the same is done in very beautiful grey costumes (as opposed to the near nudity earlier). Some of the dancers wander across the stage with steel poles stuck in their mouths, a fellatio-like mutilation sort of provocation. Other poles stick out of their stomachs and hands, as if half-human, half-metal.

One of the most beautiful moments happens here where two of the naked dancers move ingeniously across the stage both attached to a kind of rolling coat rack (Carla Maruca and another).

At the end of the first act two dancers (Carol Prieur and Kirsten Andersen) wander high across the stage in black trapeze like jumping black butterflies from the sky. Very dramatic.

I wrote a question to myself in the middle of the first act that I’m still trying to answer: How could something involving such elaborate costumes and naked dancers be boring? The Marie Chouinard troupe as a group are very beautiful young women so this should be highly engaging for both women and men alike.

I think the mystery lies in the absence of emotional content. In bODY_rEMIX/gOLDBERG_vARIATIONS, Marie Chouinard is merging women and metal. They become a sort of machine. Like Bach, Chouinard plays on their technical possibilities, creating a movement register and exploiting it fully, a visual piano scales exercise.

So while the eye is fully engaged, there is nothing for the soul to latch on to.

In the second act, the lighting is somewhat more elaborate with notably three pools of green light. There is the addition of a microphone and a host of simulated sex sounds. There is a special platform which looks metallic but is in fact made up of the shiny silk ribbons from pointe shoes.

There is a walk around by the ubiquitous Chi Long on sticks with her tongue stuck out in the nastiest possible way, looking like some devil child.

The Cuban dancer Julio Cesar Hong crosses the stage with a huge metal strap on banging it onto the clothes rack bar. He returns to cross the stage behind a suspended female dancer with whom he simulates sex as she gyrates in an exaggerated way at his every thrust at each step.

A blonde sings a sexy song on the ballet ribbon platform.

The thought crosses my mind, if Marie Chouinard is going to go this far, why not go all the way with live sex acts? She is walking the same line. If the sex were not simulated, but genuine, the show would impress as a dark revelation. Such overt titillation in this day and age are condemned to leave us indifferent, given what we see in the cinema and on television.

If it were not for stage conventions and dancers contracts, I think Marie Chouinard might want to. One way in which her show impresses me is that it takes its aesthetic line right out to the end.

Verdict from some of the unimpressed core Austrian dance audience – Oberflächlichkeit – superficial. Apparently the structure of movement and coldness were very similar in last year’s show. A non-dance audience would find the show visually exciting and it would encourage them to see more dance.

As a Canadian, I have different feelings about the Companie Marie Chouinard. Canada is a country with a very uptight attitude towards the body and sexuality. Even more remarkable is the core PC (politically correct) line. It is almost impossible to do or say anything (particularly as a man) controversial without being criticised or even banned. Women with steel poles and microphones in their mouths, hosts of beautiful young naked dancers on stage in provocative poses, are high on the list of the things which in principle are impossible to do, say or show.

Marie Chouinard in breaking down these taboos and these PC barriers with her art is actually changing our artistic/social landscape for the better. For that I’m grateful. So while I’m not convinced her art is important in any way other than technical, it is very important to Canada.

Moreover, Canada has never been particularly known for breaking technical barriers in art. One thinks of the French (not the Quebecois) as the great experimenters in form. It is good to see a Canadian artist boldly base their work on experimentation and development of form without being overwrought by issues of relevance and statement.

Aestheticism has always been frowned upon and to see it in its pure form flowering on native soil is somehow a great relief.

After the show, Marie Chouinard gave a quite moving speech about continuity of support in the arts thanking Karl Regensburger and Impulstanz for their continual support from her days as an innovative solo dancer. It is exactly that kind of solid support which allows an artist to really develop. Despite my reservations about this particular show, this continuous support has borne impressive fruit. It was very moving to see the warm relationship between the two artistic directors, of the company and the festival.

Another post-show revelation was that none of the dancers in the Marie Chouinard Company had extensive formal ballet training. As at least a third of bODY_rEMIX/gOLDBERG_vARIATIONS is danced in pointe, there were three months of special training to render them capable of all the pointe work. The absence of ballet background was invisible in the show. This level of dedication and perfection is impressive.

Despite the image of the crippled dancer, the show itself is about enabling movement rather than limiting it. At no point in rehearsals were the dancers told to emulate the differently abled, but rather to find their best way of movement with the new tools given to them.