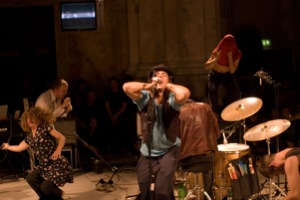 For the PONI performance, I have some authentic pictures of the event. PONI is a Brussels based international performance band.

The concert and the closing concert took place in the Casino on Schwarzenbergplatz. Many of the parties have been here and it has been a good location with its baroque elegeance, high ceilings but a certain casual energy. The Casino is also one of the second stages for the Bürgtheater. Every last Friday during the theatre season, the Bürgtheater actors put on a small show on this stage as part of an internal program of artistic development.

The party itself didn’t have quite energy of the opening party as at the end of a month of festival and workshops, people are a little bit tired. There are another five days of performances to go and three days of workshop. I was warned at the start of Impulstanz to take it slowly. It was good advice. I will follow it next year.

If you get the chance to come to Vienna and participate in Impulstanz it is not to be missed. It is the best organised and most enjoyable festival in the world with the possible exception of TIFF (Toronto International Film Festival) which is many times the size. Great dance, great parties, great staff, great city.