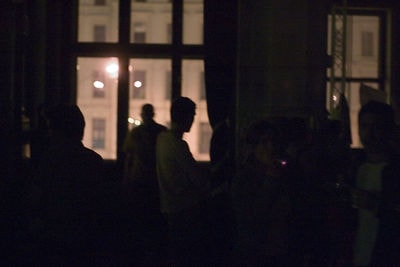 One of the great curiousities of the ImPulsTanz festival was the Choreographer’s Venture of Frans Poelstra and Robert Stein. Their four week journey began with travel to Salzbourg and sequestring in the mountains for a week.

They had taken their venture participants afield to seek inspiration, away from the madness of the city, an antique tradition revived by Wordsworth and Coleridge for the romantics.

The final result of their artistic investigation were three twelve hour shows in Vienna’s Kasino am Schwarzenbergplatz, the same venue used by the Bürgtheater for their monthly experimental one-off productions and site of many of the after performance parties for shows in Akademietheater. The shows were appropriately named Alternative Dream Asylum. I was there the night of 11 August.

My first direct contact with this project was at one of the aftershow parties. One table over there was a very large table of Austrians I hadn’t seen before behaving strangely. One of the women kept looking at me with glazed and slow eyes. She seemed to be trying to attract my attention, but there was no way I wanted to get into a conversation with somebody as far gone on drugs as she was.

She wasn’t on drugs as I found out two days later in my night excursion into the Alternative Dream Asylum. A trip as it turned out, into total darkness.

At the top of the stairs, venture participant Lieve de Pourq was sprawled out in a sleeping bag in front of experimental films made in their time in the mountains. But beyond her all was black.

There was no artificial light used. There were three Apple powerbooks set up on desks along with an elaborate sound system. The entire lighting for the 500 m2 Kasino was what came off of those notebook screens or slipped in via the huge windows. 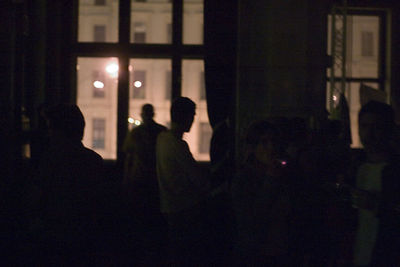 Somewhere in the pitch black, I found that same young woman, but this night her eyes were normal.

“We were being cows,” she explained.

In the hills and dales of Western Austria our young artists found not the Valkyries of Wagner but cows. So the cow became an emblem of their inspiration. Her stolidity and solidity. Her peace with the earth.

Outside of small conversations like this, there was very little happening. Venture participants wandering aimlessly. Many people slumped up in corners resting.

I had gone to the Alternative Dream Asylum in the company of choreographer Mala Kline who sat down at one of the computer stations and commenced a wonderful impromptu reading from the screen of the free verse concocted by the Choreographer’ Venture participants. Her sense of meter in English was quite wonderful as the poetry was made better for her rendering than when read coldly on the screen.

After a time, I joined her and we shared the microphone and the reading. As it was two thirty in the morning, we couldn’t blame the venture participants for flagging and falling to pieces. 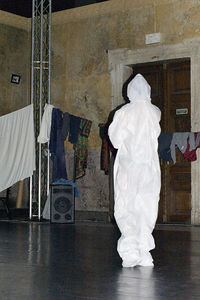 But a process had been set in motion and the venture participants (there were twelve of them not including leaders Robert Steijn and Franc Poelstra) and they huddled together and called out to one another “karoake”. Our soft and lyrical reading was at an end. Foreigner or some other 80’s rock was played at full volume, Cold as ice, you gotta make the sacrifice. I’d been sitting around in theatres for days, or at my desk writing so I welcomed the occasion to move.

And so they danced around the room like banshees and I joined them. Ultima Vez dancer Raul Maia slow danced even through the fastest music with his girlfriend. In the general anachronistic delirium, venture participant Brigitte Wilfing span with me as fast and long as anybody had in the festival .

What is Foreigner or Pat Benatar or any of this doing in the Kasino am Schwarzenberplatz in Vienna in the year 2005?

Finally the music was turned off and it was pancake hour. Frank Poelstra sat cross legged on the floor before two hot plates and made an entire enormous vat of pancake batter into hot pancakes which were whisked away faster than he could make them.

The pancakes inexplicably were very good, better than many crepes I have had in Paris.

Mala and I ate the pancakes and talked awhile.

Finally we were getting tired and thinking of leaving. But first we quarreled over her show Campo de Fiori. I wanted to know why she was so interested in Renaissance philosopher Giordano Bruno. She said something about an affinity with his religious and philosophical thought. I asked her what his beliefs were and what were hers.

It was a bit late for debating philosophy and theology (four in the morning at this point) in anything but one’s native language, so Mala wasn’t inclined to tell me. I joked that I would find out, just as surely as the Inquisitors ripped the beliefs from Giordano Bruno. Did she want to perish for her beliefs twice in one night?

We began a dance of interrogation which went on for some time. I won’t tell you. No you must, back and forth. We wrestled with one another as I asked her persistently if she believes in god.

The workshop participants gathered in the great hall of the Kasino to watch this desperate struggle which had started as just a lark but had taken on an intensity of its own. Much as I feigned to restrain my partner, she feigned to kick me. She didn’t end up with fingermarks and I didn’t end up with bootmarks. But to the external observer this ten minute wrestle must have looked very real.

But no one lifted a hand to stop it, instead they rather enjoyed the show.

Mala and I were like bad children, fighting pointlessly and on principle. In daylight or in a bar, she and I would never go down such a road together. Our discourse is always most civil, no matter how strongly we may disagree.

But in the Alternative Dream Asylum, no. The conventional rules of society no longer applied.

One woman shouted at me in German while I was inside sitting in front a computer screen reading. Later when I was unlocking my bike outside, she shouted at me again ever more ferociously. Project members observed us cooly from the windows. While I found her acting too agressive, I thought she was part of the project. So I was calm and relatively indifferent to her admonishments. It was only two days later that I found out that she was actually a passerby – totally mad – and had terrorised the entire project that evening.

So that was my subjective experience of the Alternative Dream Asylum.

It was very intense and strange.

Everyone’s voyage into the darkness and the night must be unique.

Was there any artistic value in such a Choreographer’s Venture?

Quite a bit, I would think. The participants were compelled to return to basics. It was extended voyage into a childlike state of wonder and emotion. A voyage into liberty. It meets its own description as opening new horizons for its participants.

As the Alternative Dream Asylum production was participatory and open-ended, they were able to bring that sense of liberty and play to visitors they had learned to their visitors. There was none of the foppish pretence that existed in some of the other so-called natural shows.

What was the difference? Unlike others of these shows (Jan Ritsema’s Blindspot, Philipp Gehmacher’s incubator, Paz Rojo’s Basic Dance), the audience was free to come and go as they please. Instead of talking endlessly about freedom, Poelstra and Steijn offered it in almost absolute terms.

I hope some of Choreographers’ Venture participants will share their voyage, as they travelled for four weeks while my own fragment was just part of one night.

We invite you to the moon side of the festival. We do not use any theatre lighting and we avoid the glamourous glitter of legendary stage personalities, no, we celebrate the night with being who have learned or want to learn to dance, dream, destroy, develop, dramaturgize desires, detach and dine into the do-not…, relaxing beyond expectation.

The story of the dragonfly who chases the mouse (or vice verse) and other stories appearing in darkness.

We want to be different so please do not project your phantasies on us.