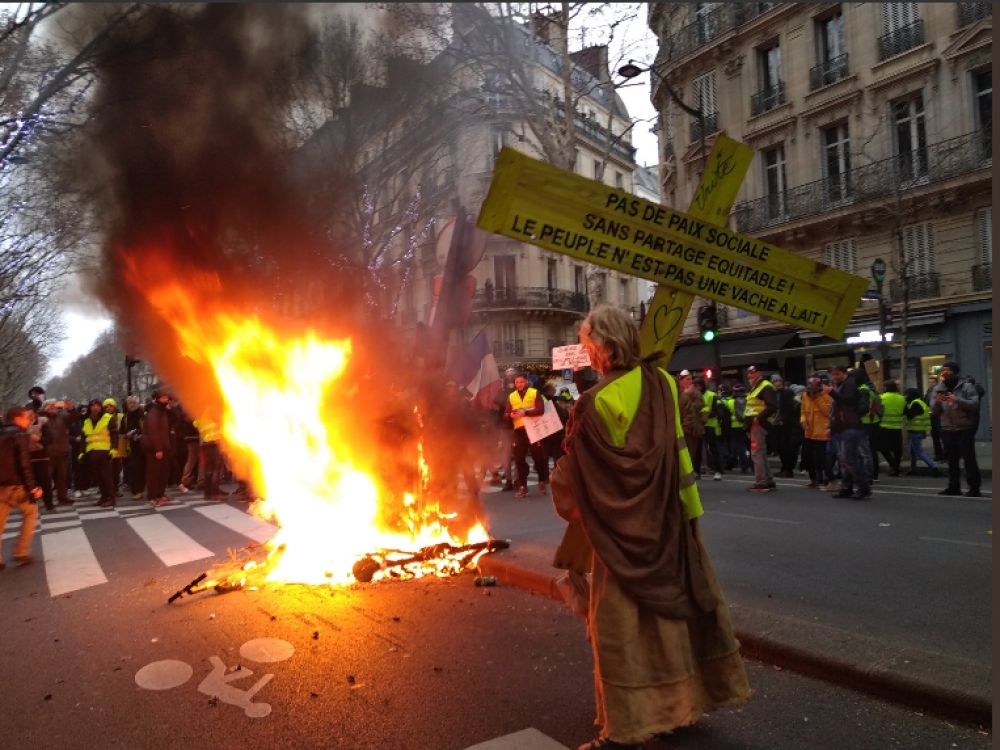 vao makes a strong argument that no popular movement in Europe will be able to derail Atlanticist EU politicians at Naked Capitlaism.

What if massive support swings behind the AfD or any party for that matter than does not bleat the Russiadidit line.

Irrelevant. The gilets jaunes were ultimately defeated by relentless police and judicial brutality; the concessions granted by Macron were limited and have been swamped since by the consequences of the pandemic and the sanctions against Russia.

Governments have been learning from the gilets jaunes events how to deal with massive popular movements, and have since geared up for that (also in terms of legal tools). I notice that the German police is already on the offensive against the AfD, raiding its headquarters.

Will there be terrorist attacks?

Irrelevant. Historically, no terrorist movement, be it the best organized and supported by foreign countries, ever represented a truly existential issue for governments. The Rote Armee Fraktion in Germany, Action Directe in France, Brigate Rosse in Italy, Cellules Communistes Combattantes in Belgium, ETA in Spain — they were all crushed.

Nowadays, the security and surveillance apparatus is way more developed and capable than in the 1970s-1980s. For governments, terrorism will be an annoyance, not a peril. Just like Al Qaeda.

How much support will there be for the EU seeing the economic disaster they they have lead the continent into?

Irrelevant. Remember what happened in Greece, where there was a massive popular push against the EU? It was choked by the tentacular EU institutional framework that controls such vital economic elements as banking, money and budgets.

If things go as planned, the EU will have even more power to thwart any opposition to its policies — e.g. with the end of unanimity rule for EU decisions, or the introduction of a “digital central bank currency”.

Basically, you are presuming that “voice” will be the major reaction to the disaggregation of European economies. I do not see any chance of this having a transformatory impact — short of an actual pan-European revolution.

I have the feeling that “exit” is actually what will happen — for instance: emigration to Canada and Australia, or to oil&gas producing countries; massive increase in moonlighting and black market; abandonment of legal recourses and official State structures in favour of mafia networks (already happening in Italy); rampant adoption of extra-European currencies in preference to an unremittingly devaluing Euro. Perhaps Russian-speaking minorities in the Baltic States and Wolgadeutsche in Germany will return to Russia. In short, people will give up on Europe as we know it.

The defanging of the Gilets Jaunes, a genuinely popular movement in a state with a revolutionary tradition is a worry.

I think vao underestimates the damage that popular revolutionary movements can do. Radicals will find a way to go underground. Nineteenth century Tsarist Russia was one of the world’s great powers but still they could not stop their own revolutionaries who toiled from the first attempt on the life of Tsar Alexander the II in 1866 to 1917 to destroy the central government until they succeeded.

The argument is that the surveillance state will stop revolution before it can occur. In my opinion, revolutionaries will adapt and become more dangerous. Power politics depends on being able to introduce more massive force quickly whenever there is a break in the dam. This will work but will depend on a network of concentration camps to isolate and then terminate those who will not go along with supranational or plutocratic policies.

Solzhenitsyn’s maxim that there are always more of us than there are of the security organs still applies. We are moving into dangerous times when the Gulag Archipelago has become a how-to manual for fighting against governmental overreach in the West.