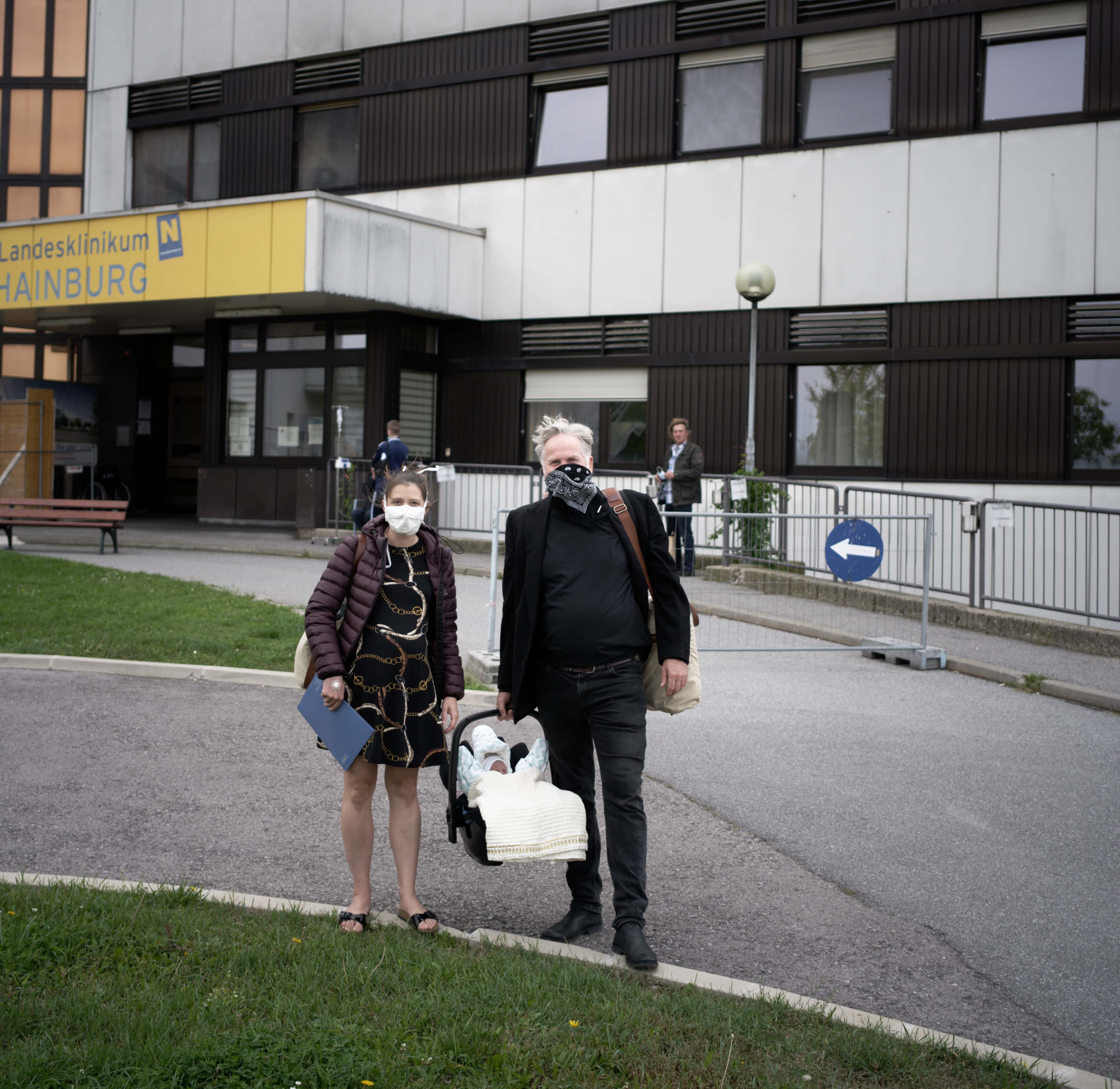 When we left the hospital in Hainburg it was very strange. Everywhere there are signs not to touch anything or anyone, not to communicate, not to do this, not to do anything. All the nurses were in N95 masks even in a normal maternity ward. It inspired us to create a photo where we were in our masks taking Aurélien home and a photo as if we were in the world we all took for granted as normal just seven months ago.

My deeper thoughts on the lockdown are complex. Locking down initially when there was an uncertain virus in the wild made sense. What doesn’t make any sense is locking down/relaxing rules/locking down again. It’s medically nonsensical while economically destructive – the virus spreads relentlessly through these half-measures. Even more disturbing is that of the trillions of dollars and euros spent on measures to support the economy the vast majority (80% at least) have gone to large corporations and banks and not people or even individual landlords. If the asset pool in the United States (to take just the single largest jurisdiction) is about 100 trillion dollars, injecting four trillion dollars in the hands of banks and corporations completely kneecaps small and medium-sized businesses. Many of those small businesses are closing now under difficult circumstances into a dead market, selling off their assets and real estate at firesale prices to the aforesaid bankers.

Measured against a GDP of twenty trillion these subsidies to banks and major corporations even more frightening. The small and medium sized enterprise sector of the market – apparently the largest – has just been hollowed out. It’s a massive wealth transfer to those who need and deserve it least. It’s not okay and the long term consequences risk being revolutionary. For those who have studied literature and history, it’s been clear for awhile that feudalism is back albeit in a technocratic guise. The moving parts underneath are not much different. Feudalism was supported by serfdom, which by any other name is slavery.

Equality before the law has been going backwards in the last thirty years and very rapidly in the last ten years. Certain individuals violating top secret clearance protocols without consequences, Hunter Biden overtly involved selling political influence in the Ukraine without even the guise of ability (Burisma directorship at $50,000/month into an offshore bank account). Normally people would go directly to jail or straight into expatriate exile for this kind of corruption. These days they are acclaimed as unopposed nominees as candidates to president.

Don’t take this as partisan. Clearly there’s dirt on the other side as well. One doesn’t live as one of the largest real estate developers in New York without deep criminal ties. Where is the idealism, where is the striving for a better world, one without war and with much, much less poverty. The latest news (as of today) is that the Moon too must house American military bases. I would have thought clean drinking water and universal health care might be the priorities before vainglorious new conflicts.

In any case this post is supposed to be a funny post about bringing a baby home in a post-Covid world. Enough politics.