As some of you might know, I recently wrote a long front page article about the struggle to be prima among the ballerinas at Vienna’s Staatsoper, started by Ludmila Konavlov (print edition for now, will appear under my profile Alec Kinnear). In that article I wrote about Maria Yakovleva and it occurred to me that I hadn’t seen Yakovleva in a leading role in a classical ballet since her first years in Vienna. I’d recommended her as an ideal Sylphide and decided to test my recommendation.

Yakovleva is now in her prime as a ballerina at 27 years of age. It’s always a joy to see a dancer with all the strength and beauty of youth, but with solid experience. The non-ballet public often makes the mistake of going to see celebrated dancers when they are past their prime. The time to see Yakovleva is now. 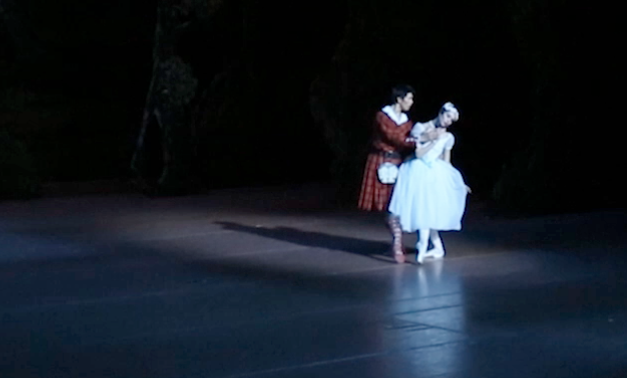 Returning to the young Yakovleva, her early faults were too much attention to her footwork and not enough attention to her emotions, as well as too strong a reliance on what is indeed a charming smile. In modern works, recently she’s overcome her urge to charm with strong expressive dancing. Yet in the title role of La Sylphide, Yakovleva continues to charm but without entirely bewitching. There’s some secret part of her which she does not give to the stage. This is not to say Yakovleva is not entirely delightful as she effortlessly dances through even the most challenging sequences.

The two other leads, Masayu Kimoto as James and Kiyoka Hashimoto as Effie, gave us an interesting pair of betrothed, both Japanese. The contrast gave a special kick to James’s search for the perfect woman, i.e. one who is different from the banality of everyday life, someone truly special. I haven’t seen a full Japanese ballet company and sometimes wonder how our two local stars would fit in, back in a top company in Japan. Would they be immediate principals there as well or would they have to fight their way through as soloists?

Kimoto made one very good choice in the evening. His James really struggled to stay with Effie, resisting the enchantments of the Sylphide right to the very end.

Alas Hashimoto didn’t give him much reason to stay. Hashimoto has often seemed b flat to me on stage and so it was again. There’s nothing wrong with her steps or her form, she enjoys dancing but she restrains her emotions too much or she just can’t express them. Kamil Pavelka as Gurn, James’s best friend, does his best to help Hashimoto out of a tight spot. Pavelka is visibly eager to take James’s place at Effie’s side from the start of the ballet. We could viscerally feel his delight at catching James cheating with another woman, hiding her under a blanket, his enthusiasm at raising the alarm and sense his deep frustration when there is nothing and no one there when the bridesmaids lift the blanket to find nothing. He is a first rate Gurn.

In passing I should note that Yakovleva would be as fine a spurned Effie as she is the Sylphide. Out of the ballerinas at Staastoper the best Sylphide must certainly be Irina Tsymbal who is able to expose more fragility than any other dancer in the company. Olga Esina is too majestic to be truly at home on this territory and Ludmila Konovlova too brutal.

A pairing of Yakovleva as Effie and Tsymbal as la Sylphide would be visually interesting as they would be like a mirror reflection. As Effie, all of Yakovleva’s sweet charms would be put to good work and she would not need to worry about the ethereal where Tsymbal is entirely at home.

James’s dilemma continues to fascinate me. Some of the orchestra members rode the train away with me and suggested La Sylphide might be out of date. The music, yes. But not the theme, I don’t think. The musicians don’t see much from the orchestra pit which might be why their musical performance is sometimes a bit tired.

Every day men continue to senselessly chase fantasy women while neglecting the woman at their side. When James finally catches La Sylphide with the magic scarf and she perishes, it’s just a metaphor for what happens when a man catches the fantasy woman. If he’s lucky she turns into a mother and a cook and someone with menstrual pains, probably far less suited to be his consort than the women of his standing and circle whom he left behind. If he’s unlucky, it could be much worse.

I remember visiting the home of an exotic snake dancer from Kazan in Moscow. Dark blonde Tatar Dina was one of the most beautiful and elegant women I’ve ever seen. A giant python and Middle Eastern veils were her costume during her acrobatic act. To my delight, I was able to get the green eyed beauty’s telephone number and a few days later we went to the theatre together. After the theatre and a romantic supper, I took Dina home to the far outskirts of the city. At home there was an alcoholic mother who was happy to see me and who tried to sell me her still uncertain daughter.

This strange plan went off the rails when her jealous (ex)boyfriend turned up, despite being told Dina was not at home. He broke the window and climbed into the first floor apartment. The mother tried to settle him down and prevented him from slicing his own wrists with a knife but that only turned his rage outwards. He came after Dina and I with a crowbar, the mother held onto him while we fled into the stairwell and out across the fields.

Dina’s boyfriend’s maniacal screams could be heard somewhere in the distance but getting closer. As the lights from the Moscow suburbs faded behind us, there was time for a passionate kiss and then goodbye. Dina’s last words to me were, “Goodbye. I must go, I do not want Vanya to kill himself or my mother.”

Our worlds were too far apart. A Sylphide died for me in that dirty field. La Sylphide is anything but out of date. And this is a short story with a relatively happy end. It could have been the end of all roads that night.

In the ballet tonight, the two lovers are separated by Madge, a witch, admirably portrayed by Andrey Kaydanovsky. Kimoto is cavorting in the woods with his Sylphide Yakovleva but can’t seem to hold her down. Kaydanovsky gives Kimoto a magic scarf which when Kimoto wraps it around Yakovleva’s neck and wrists, kills her after a final sad dance together. Kimoto/James is left alone in the woods with nothing, while Gurn is enjoying both his hearth and his bride.

The timeless message of La Sylphide is clear: Young men, do not grow up to be James. Do not senselessly pursue illusions, but love the here and now, the women you know.

Kaydanovsky and his witches are admirably outfitted with ghastly masks in Pierre Ciceri’s fine historic reconstruction of Pierre Lacotte’s original. Kaydanovsky manages to be both feminine, hideous and evil in his gestures. By softening his Madge he makes her much wickeder. He is a real revelation in this role.

Alas the same cannot be said of Maria Alati and Marcin Dempc, in their featured pas-de-deux. Alati while a beautiful woman and a charming dancer suffers from a severe bout of Don Quixote syndrome – itself nothing but a string of empty pas de deux, usually performed to roaring circus applause and as far from meaningful art as it’s possible to get.

I.e. all of Alati’s steps are fine, her smile is broad but her whole performance is both hard and brittle. She’s just a ballet dancer. I hope someone will take Alati aside for some acting lessons, as with her physical gifts, she would otherwise be capable of dancing large roles. If not, she’ll have to be content with her place as a good half-soloist.

Marcin Dempc is an interesting character. The Polish dancer does a fine job and has reasonable presence, while lacking the charm of a leading man. A smaller dancer, he also lacks the proportions to easily manhandle larger ballerinas. Somehow his pas-de-deux with Alati despite great early promise managed to be just charming.

Kimoto also seemed to struggle a bit with some of his lifts. Apparently it was only his second performance, so it may just be a performance issue rather than a strength issue. Ballerinas always look so much better in the hands of men who lift them with certainty and carry them like feathers. I’d like to see Yakovleva with a more accomplished James, although I don’t exclude that Kimoto will get there himself one day.

If anyone dares to say Kimoto is a first rate James, s/he never saw Sergei Filin dance this role. Filin was full of masculine energy, with bold flashing eyes and youthful idealism. He lifted both ballerinas as if he was waving his hand. With Filin, La Sylphide was an experience not to forget: that’s where the markers are, not getting through the part adequately.

Eva Polacek as the mother was quite heart warming, which is what one can hope for from the role. Alice Firenze, Alena Klochova and Andrea Némethová were lovely enough solo Sylphides, although none of them shone brilliantly tonight or perhaps it was Yakovleva who simply was more radiant.