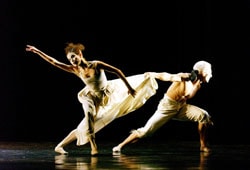 With his Nicht nur Mozart, Wien Staastoper (Vienna State Opera) and Volksopera ballet director Gyula Harangozó has truly thrown down the gauntlet to Vienna, with very little Mozart and nary an Austrian choreographer in site.

Not just Mozart, as part of Vienna’s Mozart year is a very whimsical almost taunting title to a show. Vienna is celebrating its great homegrown hero, the man who did more to make Vienna famous with his music and his adventures than any before or since. There are other heroes here (Sissi, the tragically beautiful Kaiserin with a coke habit and romantic and almost bipolar depression; Falco the extravagant and earlier dead musician) but none travel as well abroad as dear Mozart. 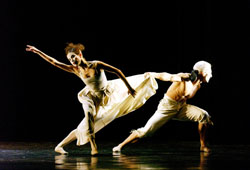 Both Petite Morte and Six Dances have been in the Staatsoper repertoire since April 2003 – an acquisition of outgoing ballet director Renato Zanella.

In apposition to Kylian’s classic but aging divertissements, director Hanzgozó has commissioned two new works Mokka and Tabula Rasa, with a heavy Hungarian influence (one choreographer; all the ballet masters; one costume designer). One feels that we don’t just have the ballet director of the Hungarian National Opera, but the whole Hungarian National Opera. If this is the reward for the role of junior partner in the Austro-Hungarian Empire for three hundred years, perhaps it is only justice.

Mokka tells the tale of five or six cafés, a few dozen couples, a lonely damsel. It is a self-contained cabaret evening. Dancing with stools, tables which appear and disappear. All the usual tricks, to a throaty soundtrack from Italian singer Paolo Conte. 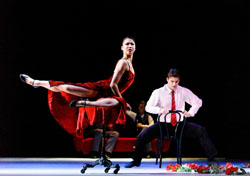 The costumes are shiny and satiny, flow over the dancers limbs like pearls. There are nice touches to the decoration like real chandeliers which come down, cups and saucers which magically appear in the dancers hands. Quite a bit of effort was devoted to the set changes. At one point Shoko Nakamura walks out of the set with a cup of coffee and sips it enticingly at the front of the stage. As she strolls towards the audience, the curtain comes down very fast. When she’s finished scant seconds later and turns back to the stage, the curtain comes up just as quickly to an entirely different stage set with dancers in different costumes. It happens as if in the blink of an eye and was like a magic trick.

This kind of attention to detail in the transitions makes a show go by quickly. While there was nothing particularly astonishing or memorable in the choreography, there was a pleasure in the movement. It was a feast of sentiment and ballroom dance. Something like a very nice and very large piece of chocolate cake. A guilty pleasure or not. A question of attitude. Normally this kind of cabaret performance is danced by second-tier dancers who don’t have the kind of training that a national ballet company have and perhaps not the talent. 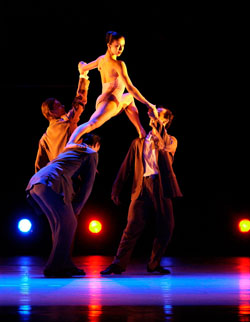 In this easier choreography, the Staatsoper dancers shone. They made the choreography sing with the apparent pleasure and ease with which they went through their numbers. It’s one of the first times, I’ve really enjoyed seeing the Staatsoper dancers at work and not been wondering how much better the ballet would if the Bolshoi, Marinsky or Paris Opera were at work instead.

Both leads, Dagmar Kronberger and Shoko Nakamura did well. Shoko Nakamura was the more engaging and fluid of the two, but Miss Kronberger did well in the role of the lonely damsel. She does seem to remain too much in her pose and in her role – alas no empathic waves to move an auditorium tears.

A second lady in black danced very well and very movingly but unfortunately I don’t have her name (Katherina Davydova of Russia).

Mokka received a spirited reception from the audience, allowing time for Myriam Naisy and Philippe Combeau to take multiple curtain calls with their performers. We were off to a good start.

Tabula Rasa was a stark change of pace. The curtain rose to a white stage (Mokka was all black) with a white ceiling and white banners rising up the sides of the stage. Arvo Pärt’s astringent score filled the theatre with bare strings and ethereal notions.

Twelve men and women came out in six couples in the most astonishing of undress. The women were in silk thin backless white dresses which stayed on in the most astonishing way (later when the lights came up one could see the natural colored backs, but it was a strong visual trick). The men wore a sort of long skirt/pants also all in white. The men’s torsos were absolutely bare. Very ancient Greek/Classical World. One imagines the tempo of Apollo.

These were costumes only for the most beautiful and most regularly proportioned of dancers. Merciless to imperfection. Whoever did the casting did a good job. All the dancers looked great.

The choreography was challenging and rewarding, including lifts, floorwork, elaborate holds and releases. Excellent stuff from young Hungarian choreographer András Lukaks – Mr. Lukaks is still dancing himself and has been engaged as a soloist in the Vienna State Opera by director Harangozó after a career in Budapest and Lyon.

There was a very strong solo by a small blonde dancer (Rebecca Gladstone of Austrialia via the Berlin Opera) at the beginning of Tabula Rasa, among all the other dancers. One wished that she had just a little more speed and reach and precision. One felt the very measurable difference again between the Paris Opèra (or Bolshoi Theater) and Vienna State Opera. When are they going to give these dancers proper classes and get them sharp? Is it something in the water in Vienna? Why are they not stronger and faster? 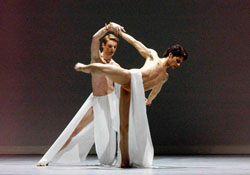 The men’s costumes were very advantageous for Staastoper dancers. Their legs were covered and only the torsos visible. Generally (with perhaps two exceptions), the Staatsoper men have the spindliest and most underworked legs I’ve ever seen on soloists from a major company. With their legs covered, they were a far more convincing group. What are they doing at the Staatsoper? Skipping class to go work out at the gym?

Tabula Rasa told a tale of fragility and vulnerability.

Its culmination came in the gorgeous and moving duet between Adrian Cunescu and Florian Hurler. I am not normally partial to duets between men, but there was a rare sensitivity in their communication. The movement was imaginative and challenging. Wonderful.

The only critical thing I would say is that perhaps Tabula Rasa is a little bit too derivative of some of the white garbed Trisha Brown work at the Paris Opèra or some of the better Forsythe and Kylian work. A dedicated dance historian might catch András Lukáks out at plagiarism here. I would also wish that choreographer Lukáks might try some more challenging music. Of his nine major pieces, five are on Michael Nyman’s (film) music, one on Antoni Vivaldi, one on Léo Delibes, one on Philip Glass and now Tabula Rasa on Arvo Pärt. When you start with crowd pleasing music like this, you’re not taking very big risks. 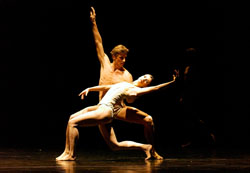 Frankly I was bored by the Kylian pieces. The cutesy carryings on in wigs and white face, the tired questioning of gender rolls, it all speaks of the 1980’s. The pieces don’t have enough dance in them to really inspire. Perhaps it was just the strong pieces which preceded them.

Then again I much prefer complex emotion to trite laughter in dance and this was exactly the inverse.

In any case, director Harangozó after falling flat on his face with Tschaikowski Impressionen from protegé Ivan Cavilleri did well his third time out of the gate (Coppélia was fine but not spectacular in a very old staging from director Harangozó’s own father). Sadly, there were very few of the Austrian dance and choreographic world to see it this evening. Most choreographers and artistic directors chose to stay away after the deception of Tschaikowksi Impressionen. It looks like they will have to make the pilgrimage to Vienna at some point to see Nicht nur Mozart.

Mr. Harangozó’s directorship for all intents and purposes has been saved after shaky beginnings. Let’s hope we are headed in the right direction at last. Let’s hope those imported Hungarian ballet masters can whip the dancers into proper shape at last. Lots of reasons for optimism.