I’m probably just going to let my Economist subscription lapse at the end of January.

While I do having access to the whole world in a single news publication, sorting through the corporate disinformation is awfully tiresome.

Their editorials are particularly poorly thought out.

Let’s take the week of 20 November:

The Economist position: The Irish are wrong to fight receiving bailout money and the Germans are wrong to insist they raise the absurd corporate tax rate of 12.5% which got the Irish into this bind in the first place.

Too much of the EU’s motivation seems to be to punish Ireland for its Anglo-Saxon ways—especially its highly competitive 12.5% tax rate on corporate profits, which helps it attract foreign firms. Raising this would be madness….A new generation of firms, including computer-gaming outfits like Activision Blizzard and Zynga, are joining the established operations of Intel and Google. Ireland’s workforce is young, skilled and adaptable. Rents are coming down even faster than wages.

Guys, the Irish have been busy selling the family silver faster than the Germans can replace it. Corporate tax rates of 12.5% in a single member state, only betray the whole Eurozone. Low rents for starving Irish potato farmers is not why we set up the Euro zone. 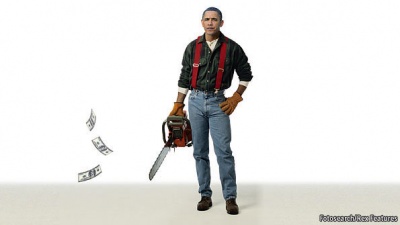 Mr Obama and the Republicans are brimming with ideas for freezing discretionary spending, which covers most government operations from defence to national parks. They have found common cause in attacking “earmarks”, the pet projects that lawmakers insert into bills. But discretionary outlays, including defence, are less than 40% of the total budget. Entitlements, in particular Social Security (pensions) and Medicare and Medicaid (health care for the elderly and the poor), represent the bulk of spending and even more of spending growth.

On pensions, the solution is clear if unpopular: people will need to work longer. America should index the retirement age to longevity and make the benefit formula for upper-income workers less generous. The ceiling on the related payroll tax should be increased to cover 90% of earnings, from 86% now.

Here the guys at The Economist are so far off the mark that they are searching the forest for dolphins.

The problem with the American economy, boys, is the defence spending. Quite simply the US can’t afford to continue to spend that much money on military and mercenaries who are not bringing home the treasure.

And it looks like they never will be able to bring in the treasure. The resistance of the natives in Iraq and Afghanistan have shown that these nations know the price of compliance: obliteration. Trying to sell the public on nuclear armageddon and recolonisation hasn’t gone too well.

Time to call of the whole boondoggle.

Sending old people back to work, cutting families off foodstamps and eliminating health care altogether for all but the extreme wealthy is not a formula for anything except revolution. You do remember 1792 and the Convention, don’t you?

Economist editors would be in the second group to the scaffold right after Bush/Cheney and their handlers.

The politics of fiscal truth may be less awful than he imagines. Ronald Reagan and Bill Clinton both won second terms after trimming entitlements or raising taxes.

Actually, Reagan just boosted the deficit. The only American leader to try to really bring the US back into the black is Bill Clinton. He did it while improving the brand image (less wars, more support). With a better brand image around the world, American business prospered. With a smaller military budget, ballooning deficits deflated. The goodwill and financial tax of the Bush/Cheney/Obama wars is destroying untold wealth

Spam is a real problem. My business is helping businesses to sell their services and creating IT which works for them. Spam tortures our ingenuity every month. Great to see it as as a headline issue in an international news journal.

Here they get off to a better start and even manage to put their finger on the nub:

spam is not just a hack or a crime, it is a social problem, too. If you look beyond the computers that lie between a spammer and his mark, you can see all the classic techniques of a con-man: buy this stock, before everyone else does. Buy these pills, this watch, cheaper than anyone else can. The spammer plays upon the universal human desire to believe that we are smarter than anyone gives us credit for, and that things can be had for nothing. As in other walks of life, people become wiser and take precautions only when they have learned what happens when they don’t.

That’s absolutely right. The something for nothing mentality is what keeps a lot (but not all) of the spam industry humming. On the way to the solution, however, The Economist editors get lost again.

According to The Economist,

the real problem is man, not the machine. Public behaviour still treats the internet like a village, in which new faces are welcome and anti-social behaviour a rarity. A better analogy would be a railway station in a big city, where hustlers gather to prey on the credulity of new arrivals. Wise behaviour in such places is to walk fast, avoid eye contact and be brusque with strangers. Try that online.

Actually that’s better than what I anticipated: a call for the freedom of the  Internet to be curtailed.

But their recommendation is a pretty sad indictment of the behaviour and courage of Economist editors. Don’t talk to strangers.

While that does apply to small schoolchildren, giving up the social possibilities and the discourse made possible by the  internet is an awfully high price to pay to spammers.

Quite frankly, I thought I’d see The Economist clapping for joy that the Tories have taken such populist conservative measures to heart and are fulfilling their election pledges. But no.

Businessmen are not happy.

The cap has two main failings. It is disliked by businessmen, an especially important constituency for a government trying to sustain an economic recovery while slashing the public sector. Companies complain that it hampers recruitment and growth. That argument is especially plausible because unskilled immigration from outside Europe has in effect already been stopped, meaning that the cap hits only highly skilled and skilled workers, such as bankers, accountants and scientists.

Bankers, accountants, scientists and their employers are inconvenienced. How annoying. Britain’s government may have to do something about internal education systems and retraining of their own folk, rather than just sniping the elite of other countries. Investment in one’s own country and one’s own population. How absurd. Almost Teutonic.

The Economist does admit that the new laws don’t affect immigration from within the EU which is the vast majority of immigration. No need to sulk, gentlemen. There will still be lots of cheap labour to keep your shoes shined, hourly wages down and trade unions out of business.

The last editorial outshines all that has come before it for false light in dim circumstances.

Some thin praise for microfinance to start: “uncollatorised business loans to groups of poor women, they almost always repay them on time”. Apparently, microfinance which started as a civic movement (the seed capital came from entities committed to development and not profit) is being commercialised in Bangladesh and India.

Lots of bad actors have hit the scene and are lending easy money but on hard terms. How hard?

Try over 27% annual interest! The Economist is angry that the Bangalese government has capped microfinance rates at 27%.

No we wouldn’t want to get in the way of the invisible hand, especially when it’s deep in the pockets of the poor in the third world and not the corduroys of Economist editors in London.

And that’s just one week’s harvest of myopia and false prescriptions for real illnesses. Surely a publication with such history can tell more truth or invent better lies.