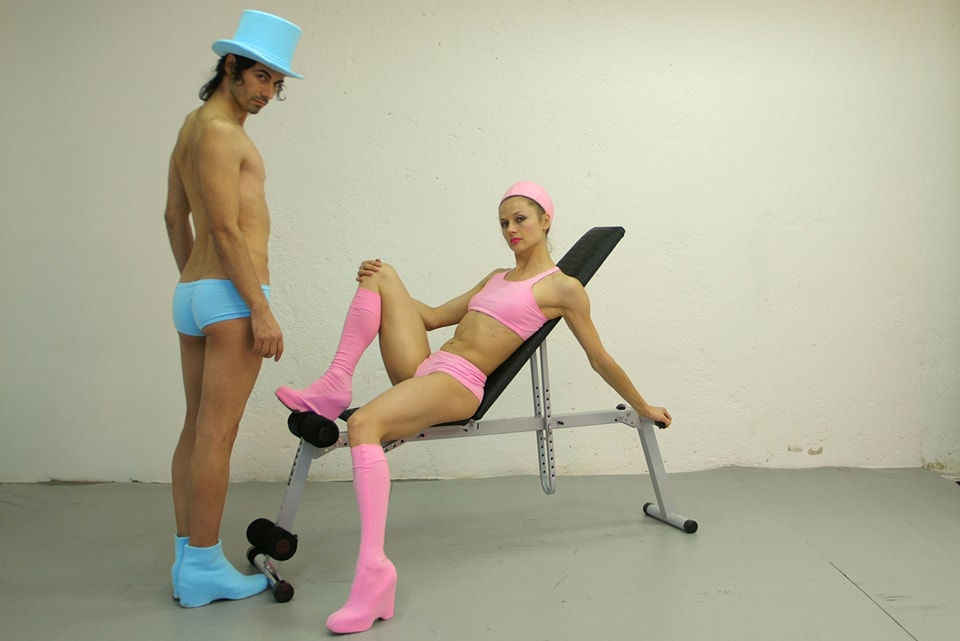 In other words: "A long wool coat in navy with worn over a sweater with a soft collar worn with peach leather pants and pointy red nubuk shoes".

In other words, you know this piece will be frivolous before you even get there. Frivolous not as in pointless, but frivolous as in the écume des jours (Froth of Days) of Boris Vian.

The stage is bare, without curtains.

The dancers enter from the house, each dressed in the sports clothes of the down on their luck, carrying a large plastic bag. Certainly from not such a good neighbourhood, ordinary folk. They begin by stripping off the ordinary clothes and showing off their very showy bodies.

Nadine Fuchs does gymnastic stretching in pink lingerie, staring matter-of-factly at the audience. 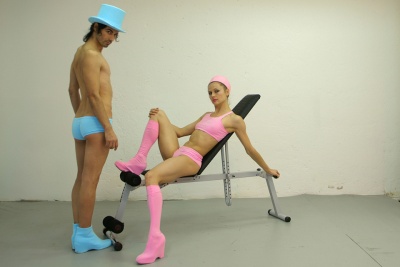 You can see this pair are either making the requisite sacrifices for their art. Neither of them has an once of fat on either stomach or hips. Either that or they hate food.

We are now firmly in the domain of the unpredictable. The conventional down on your luck dancer in sweatclothes to world class gymnastic stretching, it’s extremely unclear where this is going. In the background there is very faint music. 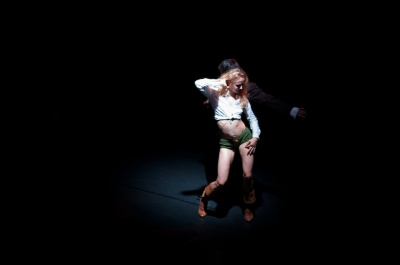 Now they dress themselves up in something else again. Marco is in black tie and patent leather shoes, his strange long hair making him look like an out of work British rock idol from the eighties.

Nadine puts on green hotpants and a lacy cowgirl shirt with tall boots. The pair circle one another warily, begin to dance and kiss. Nadine flings herself passionately on Marco but then starts to pull herself higher on his chest still thrusting her hips at him.

They make us believe for a moment it might be real passion and then it just changes into absurdity again.

Eventually the pair get to talking. Nadine speaks about Marco to the audience in first person.

"He got his start in dancing at a club in Brussels called Happy Fee, a strip club," she accuses him. At this point Marco is down to bare chest and black pants again. He lingers over at the side of the stage.

"Marco is waiting for a moment," continues Nadine. "A moment where the positive energy of the moment and the body come together." It’s hard to tell if she is serious or not.

When Marco begins to dance now, slow turning movements, a spine sloped backward, hands at awkward angles, we get contemporary dance improvisation 101. Both Fuchs and Delgado are mocking their opponents, the earnest contemporary brigade.

Delgado is clearly comfortable and in control of the idiom which makes his mockery of it all the more delicious. At the end of his parade across the stage he stops and stands in one place. Fuchs strolls by to make some adjustments and distorts his face, before moving his arm into a grotesque thumbs up position. 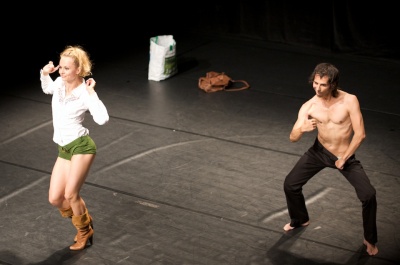 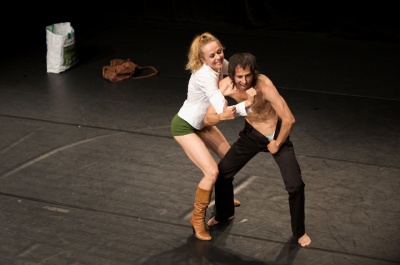 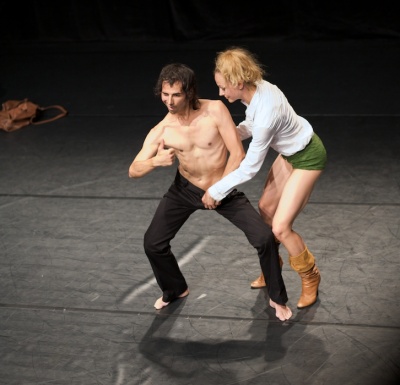 Delgado’s distorted half clown face makes us wonder about the poses we make and the poses people want to put us into.

A little bit later they find their way to naked and dance across the stage holding one another’s crotches. From naked Delgado and Fuchs move to a pink sixties outfit for Fuchs and head to toe blue tails for Delgado. 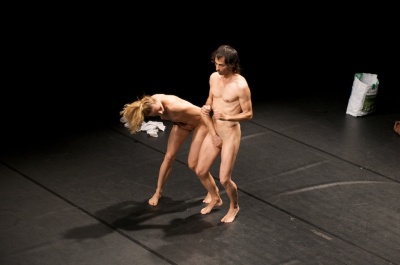 Curiously as soon as they are perfectly attired they set to meticulously rebuilding the stage with metal and wood. On stage, they left to life size photos of themselves. Each photo includes a hole in the wood for a self-portrait like in the surface.

"I’m thirsty," proclaims the pink Fuchs. "We’ll be up in the bar enjoying a drink. Anyone else who would like to have a drink too, come and join us."

Delgado hands someone in the front row a polaroid camera and then they both walk up through the audience and out of the theatre.

The audience sits in stunned silence for about thirty seconds and then they start to go for the self portraits.

The perfect anti climax. We are left taking pictures of ourselves in the cutout clothes of the two leads. 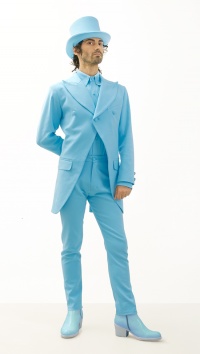 I wondered about whether it was necessary to include Marco Delgado’s biography in the piece. I asked Delgado about it: "Who says it’s my biography?," he smiled.

That bit of stagecraft – breaking the line between the real and the imaginary seems to me to be at the core of manteau long en lain marine. Delgado and Fuchs want to take the stage back from earnest explorations of your real internal self to the magic of let’s pretend.

The constant costume changes are a reminder that surfaces are just that and that one’s impressions of someone are only clothes deep. This simple paradigm of blurring reality and fashion wakes the world up. You wonder who you really are and who the people you know really are. For at the end of the day, you are the sum of your clothes and your presentation.

Or at least much of the world works like that. manteau long en lain marine is a wonderful voyage into appearances and the unpredictable.

Even nudity is anything but clarity in this show.

Seen a second time, some of the magic comes off. The jokes turn out to be more closely timed than you think and less spontaneous. The improvisation and unpredictable is actually carefully choreographed.

But it is amazing how Fuchs and Delgado manage to maintain that feeling of unpredictable spontaneity most of the time. I asked Marco Delgado about it – "The freshness is essential. It is sometimes hard. We are often changing the show to keep it fresh."

So take this review with a grain of salt. In a month or two, you may see a very different show than the one I saw in Vienna.