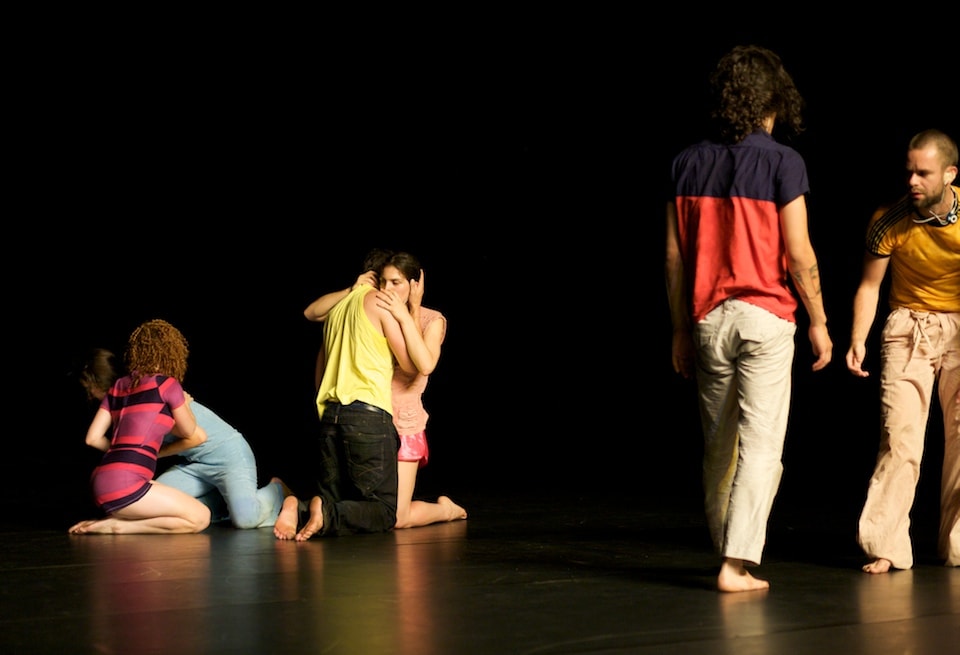 One of the curiosities at ImPulsTanz this week was the stage performance of Transformers, the culmination of two weeks of rehearsals and workshop led by Eszter Salamon and Christine de Smedt.

This is one of three or four professional level two week programs, mainly populated by the DanceWeb dancers. For those not familiar with DanceWeb, it is a program run by ImPulsTanz which brings about forty dancers from around the world to Vienna to study dance at the ImPulsTanz workshops and at the performances as well for free. DanceWeb is one of those great initiatives which changes the world by providing a conduit for international exchange. Often DanceWebbers end up visiting one another across the globe. I have been the guest in Venezuala on a road trip with one of my friends from DanceWeb. This is not untypical. So that is the context of this two week intensive: working professionals from around the world, but with no prior experience dancing with one another.

Some will argue that Transformers should not be critiqued as it is just the results of a workshop. Not so. It is deliberately presented as a stage work and not in laboratory format. 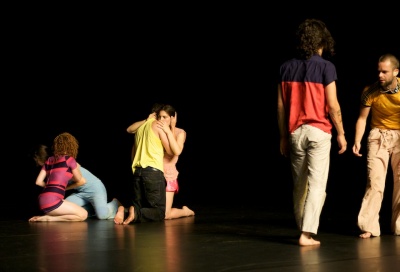 A curiosity are the wires going into each dancers left ear. More on them later.

The show starts off slowly with heavy breathing moving to amplified shch whispering noises and lot of meandering around the stage. The whispering slowly accelerates to quiet howls over the course of twenty minutes. Frankly this warmup session is pretty painful. 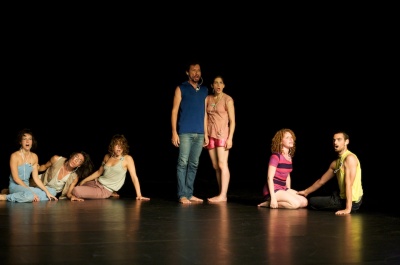 They now turn it up a notch and go into spasms and fits and real primal screams. Particularly amazing is a guy who looks like one of Ghenghis Khan’s lieutenants with long dark hair and high cheekbones. You fear for his life and yours as he screams and thrashes.

Particularly effective is Chris Haring’s dancer Alexander Gottfarb who doesn’t let the spasms go through his whole body but confines it to one part of his body at a time in a controlled rotation, focusing your attention much better on the nuance. Alexander has an unfair advantage here though as Chris uses spasms as well as part of his stage vocabulary (albeit a small part rather than the whole enchilada as here).

This thrashing and screaming goes on for at least a quarter of an hour.

When it quiets down the stage goes dark and you think the purgatory is over. Not at all.

The lights slowly come back up and the dancers begin to assault the audience verbally. 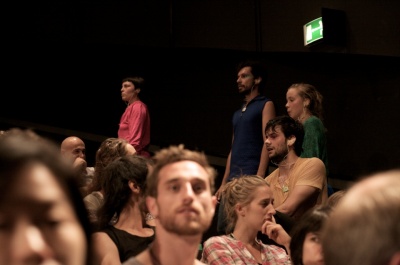 "Do you know what standing by means while the government kills your fellow man?"
"What about La Hacienda?"
"It is time for a revolution."
"Stop the injustice. Just wake up and stop it."

The dancers come right up to the first row and look in the eyes and shout in the face of the audience. Most of them believe in their revolutionary text and pronounce it with fervour. Quite effective.

They then move up the staircases of Halle G shouting at audience members higher up. 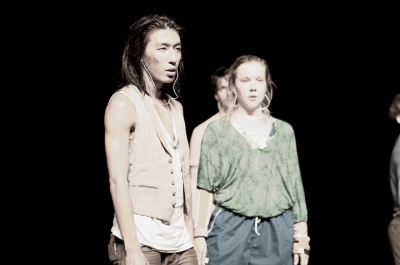 I thought they were all going to leave the theater as in Delgado or The Love Piece, leaving the audience alone to muse on what we just saw. It would have been quite effective.

But no, they made it back down to the stage.

Fairly robust applause when the lights went up, but the audience is mainly fellow dancers and friends – hardly impartial.

One could argue that Transformer is a workshop and not a performance to be critiqued. On the other hand, Eszter Salamon and Christine de Smedt made a conscious decision to present on mainstage and not in a laboratory session.

My neighbour Keith Hennesy complains about these white European kids appropriating the text from the Civil Rights movement (The Last Poets). This critique doesn’t seem particularly relevant to me. The issue is with revolution and injustice, not with colour and civil rights. Colour is a very narrow view of injustice which has become as much as an economic issue as one of race.

I could live without the half hour of painful buildup as the young dancers build their nerve up to explode on stage and then do their love-in.

But the peak moments did have a genuine character, enough to make one reflect on what humanity means and the differences between man and beast. Apparently not a lot. A fair enough conclusion. Beasts do less damage to the earth as we do.

I do have issues with the technology used. Apparently the wire into the left ear is actually an earphone attached to an iPod shuffle. Each dancer has a soundtrack with both noises and instructions on it, to guide him or her through the performance. For me, giving them a constant hidden soundtrack to perform to is the equivalent of cheating on exams. Almost all of the sound the audience gets is from the dancers.

The dancers should have learned how to generate these noises unselfconsciously without doping themselves with dialogue in their ears. If the dancers need a conductor or fluffer, that should be provided from the first row.

However, Christine de Smedt says the title Transformers is about transforming those sounds and those instructions from the iPod shuffle into performance. Okay, but this is not really preparing the students for the true internal work on themselves. As a prep exercise okay, but I’m not convinced.

Technology should be used to enhance, not as a crutch. I’d like to ask the participants about how they feel. If any of them read this, feel free to leave a comment about the experience of performing to recorded instructions and audio. 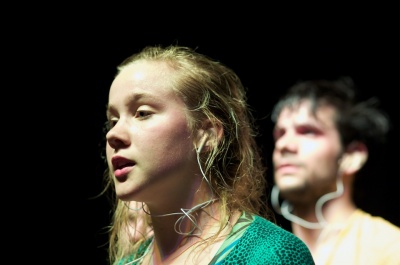 It should be noted there is scant little dancing in Transformers, but given the sparsity of dancing in the entire ImPulsTanz festival, there appears to be scant need for contemporary dancer performers to be able to dance. If all pro dance workshops go in this direction, we are bringing up a generation of dancer cripples who will be able to do little else than howl and writhe.