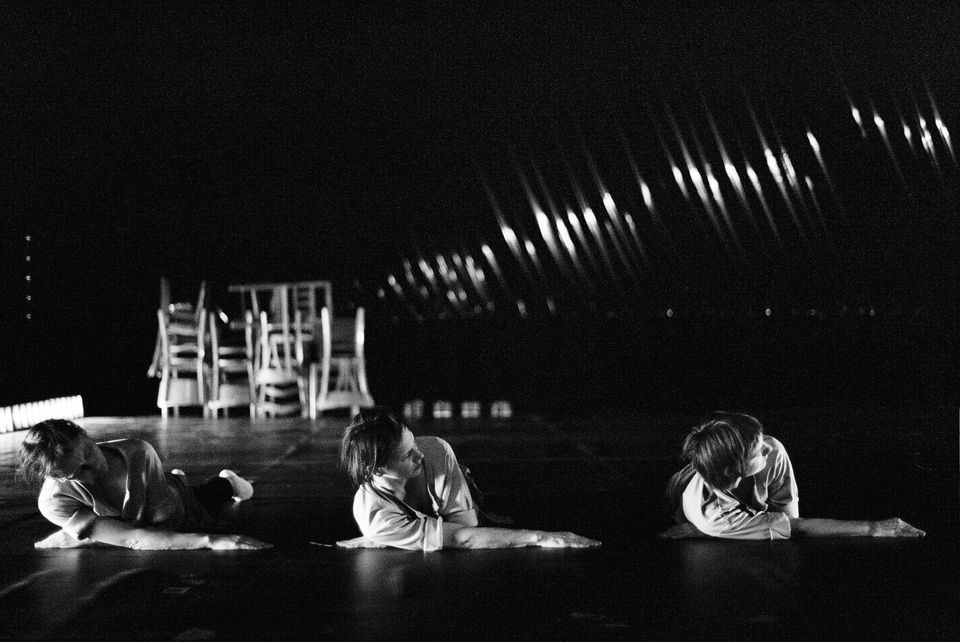 Rosas danst Rosas is a historical work, the second mainstage full length work by then young choreographer Anna Teresa De Keersmaeker in 1982. One of the performances which moved me the most in my life is Rosas’s A Love Supreme so I was eager to see Rosas danst Rosas in its entirety live.

Rosas danst Rosas has been filmed at least twice, once in something like the original version, more recently with the current cast. Rosas danst Rosas is something special, the seminal work on which a great dance company was built.

Normally every generation of Rosas dancer must learn Rosas danst Rosas and so the piece remains perenially young, each Rosas dancer taking her place as the latest incarnation of de Keersmaeker and her predecessors. 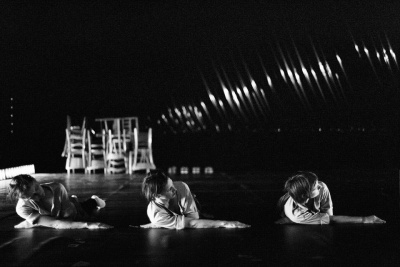 This year, Anna Teresa did something completely different. She rejoined the production herself and recruited some of her top teachers, dancers from the past, all born about 1970. Her motivation for doing the piece this way is not quite clear.

This wouldn’t be the first time a great dancer had such an idea: the very great Russian dancer Maja Plissetskaya had a 70th birthday gala where she danced much of her repetoire from her prime.

Indeed, our generation (I’m about the same generation as the second generation Rosas dancers) is very interested immortality or at least in remaining forever young. The eponymous New Romantic tune of the 80’s foreshadowed our ongoing efforts to stay vigorous and attractive our entire adult lives.

So how do De Keersmaeker and her dancers succeed in their dance with time? 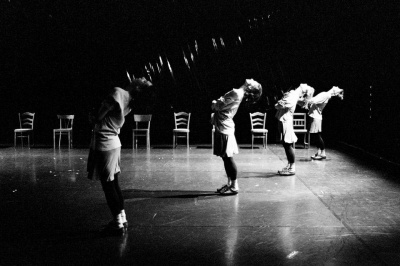 Rosas danst Rosas begins with industrial sounds and floor work. Eventually the dancers rise from the floor to reveal themselves in grey shirts and leggings, surprisingly contemporary – almost like Japanese school girl uniforms. Dark hair, long legs, slender waists, intelligent expressions: sophisticated European beauty incarnate and quintessential Rosas women. Anna Teresa De Keermaeker herself is very much in this mold. I sometimes wonder if her predelection for this type is narcississtic or just a matter of tast.

The opening section is all about breath. It’s sound, it’s feel. One didn’t notice anything different about these dancers in the dusky light until the first hard falls, which the cast bravely took on at a speed to make the floor crack. All of the dancers showed extraordinary sensitivity to the floor and to weight. There was a great deal of finesse to all of their movement.

In the second movement, the choreographic language becomes more explicit, more about the dancer and less about atmosphere. The movement is predicated on the state of mind of a young woman from the age of 22 to 30. Each dancer revels in the physical magnetism of a woman of that age. During those years of her life, a beautiful woman may struggle with her emotional life but masters her exterior world and basks in her own perfect physical presence.

Alas sometime in the early thirties, this symphony of fertility and time comes to an end and either a woman tends towards too thin or too thick. Her curves become either lines or bulges and her face begins to crease. She wears confidence like a mask rather than as part of her own skin.

That young arrogance and naive joy in her own beauty is so much a part of the movement here that for the most part it seemed very strange on these dancers, all around forty. At one point each dancer touches her chest, her breast repeatedly. In Cynthia Loemij’s movement you could see the inherent self-confident sensuality of the gesture. But in the architect of the movement, De Keersmaeker there was a tangible disinclination to touch her own breast, almost a sort of dislike of her body. Certainly devoid of any sensuality, at best perfunctory.

The dryness of performance almost feels like a betrayal of the original material, which is a celebration of life and sensuality.

Later on the dancers take turns to show the audience first one bare shoulder and then the other. Samantha van Wissen and Cynthia Loemij both invest themselves seriously in the seductive gesture. Again De Keersmaker is reluctant, perfunctory. As she knows the content of the choreography better than anyone else, I am surprised she wanted to appear in it on stage if she did not want to respect its spirit and fulfill its intention.

As the dancers whirled and flirted, one felt in some way like one was watching ghosts of Christmas past twirling on stage. 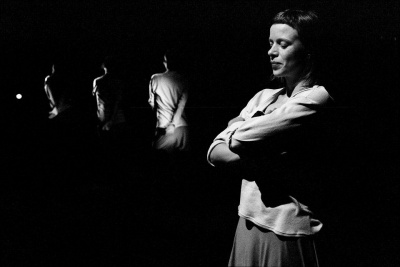 Of all the dancers, only Cynthia Loemij still danced like a Rosas dancer, swift of foot, supremely feminine, assured without arrogance. As Rosas dancers are wont, by the end of the show she had soaked with sweat her long hair, which whipped wet through the air across her shoulders. Her mouth bloomed red with exertion and her eyes flew wild from the passionate movement.

Loemij’s energy, intensity and natural Rosas sensuality only made it more clear how strange it is to resurrect this work on an older cast.

Rosas danst Rosas speeds up enormously towards the final climax. At the end, Anna Teresa De Keersmaeker just couldn’t keep up. The steps created by her 27 years ago overwhelmed her and she fell first a half step and then sometimes a full step behind.

All three of the ex-Rosas dancers enjoyed themselves. De Keersmaeker seemed more than a little dissatisfied at the end. Was she cross over missed steps or with her choreography?

De Keersmaeker should neither be surprised nor cross with herself…we all lose steps. Being fit is not enough. I think nothing of cycling the hundred kilometers from here to St Polten along the Danube. But in dance, I’ve lost a step now. There is nothing I can do, that faster half step is gone. This is the deal with mortality – and there is no other deal on offer.

Strangely as the architect of so much sensual feminine beauty and so much emotion in movement, Anna Teresa De Keersmaeker is severe and often dry in public and even to some extent in life. I don’t quite understand her compulsion to perform her own works herself now.

A years ago in Desh, De Keermaeker and Marion Ballester were able to offer something different from the usual. Desh was an original work, built on their dancing in the here and now. What the reprise of older pieces with herself in the lead means, I am not certain.

The technology and availability of recording images has improved a lot since 1982, along with interest in the Rosas company and their financial support. Perhaps De Keersmaeker is seeking to leave permanent documentation, to fix a record of her own performance as well: images which will live on after she is gone when perhaps even the Rosas company will be dance history and not contemporary.

In artistic terms, I would find these recreations of older works more interesting if De Keersmaeker would rewrite the emotions on the dancers in the here and now: dance for forty year olds rather than twenty-five year olds. That transcription would be far more interesting than this imitation of what was then.

As a reflection on time and mortality, this restaging of Rosas danst Rosas provokes enough to leave no regrets. But that perhaps one has not used one’s short time on this earth as well as Anna Teresa De Keersmaeker, whether she dances on or not.