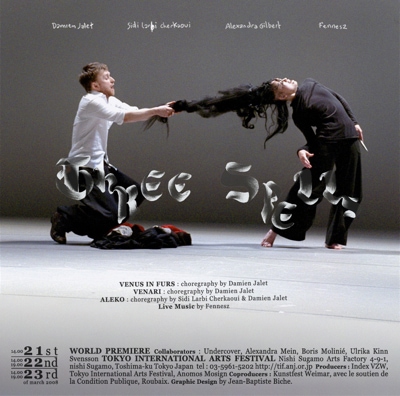 Man or beast. Where is the boundary between us? This is a theme that Damien Jalet often explores on the boundary of his larger pieces with Sidi Larbi Cherkaoui.

On stage Damien Jalet live on the boundary between man and beast. His contortions on stage have a sinister aspect. He rolls and crawls, often ending in a fierce growl.

Tonight he took this theme and devoted the evening to transmutation between animal and human. 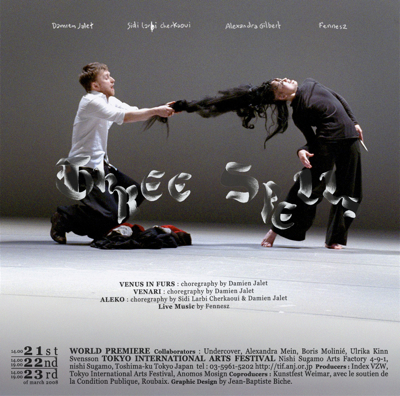 The opening piece began with two mythical creatures with grasping mouths doing some strange dance of love and combat, kissing and biting one another. The movement was front lit throwing up macabre shadows on the wall behind.

Eventually one of the white furry animals perished and the remaining animal attacked a supine young woman, who gradually struggled back against the beast and stood up. She was wearing a black veil and jewellery. Her translucent black silk top revealed a gorgeously proportioned body. 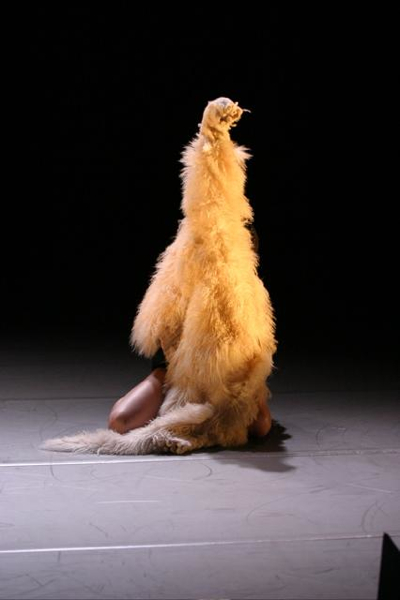 My companion for the evening had no idea that these marvellous and mystical creatures were created by the two arms of a single dancer. She thought the creatures were animated via special machinery.

He dons the antlers and then dances with the full set on top of his head. Staggering, leaping, bellowing, until he can move no more. At that point a shot rings out, the lights fall and so does Jalet’s stag, struck by a hunter’s bullet. 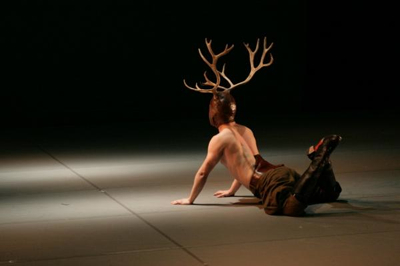 Peculiarly Jalet returns still in leather pants but with a red polo shirt rather than barechested. Jalet is now the hunter and acts out rituals of hunting including shooting, striking, archery. There is some high irony in the prey become the hunter, but the light tone seemed disruptive and out of place for me after the pain of the hunted stag. No doubt the almost Brechtian alienation is intentional but still peculiar.

The three pieces were originally created separately. Indeed the duet at the end, was part of a much larger piece called Myth (a quite amazing work). When I saw Myth a couple of years ago at ImPulsTanz it oscillated in my mind as either the best piece of the festival or a total fraud. Each bit and piece was splendid from the live orchestra to the different caricatures of the citizens in the library.

In Myth, Jalet spent much of his time rolling on the floor and contorting and growling as in these pieces. He would sidle up to the front of the stage and fix loathsome eyes on a poor innocent in the first or second row and growl with rage. You could see any of the audience within five metres of Jalet shudder with horror.

But it was all unclear why there was this wolf man on the floor. What role do werewolves play in mythology? A small one. But due to the over the top performance by Jalet, in a way werewolves dominated the entire piece.

For all of these hard words, there were so many fine scenes, so many amazing dance moments (not least Jalet’s floor contortions – horizontal dance) – that one was tempted to try to find sense in it all. By the end, I decided that Myth was splendid theater but nothing more. Seeking a deeper meaning in its paradoxes was like seeking meaning in music videos. For the most part, music videos are a commercial art prepared under tight budget constraints. The question is never what does it all mean but what will be effective?

What will make the singer look good? What will make the viewer want to buy the album? Shock, beauty and paradox. These values often lead to some originality – but it is an empty vessel, devoid of the nutrient of sense or deeper artistic feeling.

I didn’t care. Myth was a damn site better than boring tiresome non-spectacle (conceptual dance) that had begun its reign in Vienna that year. If one must have empty calories, let the cake be beautiful and taste good. 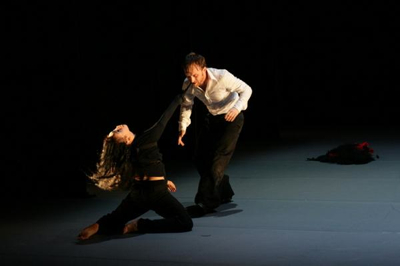 In any case in the context of Three Spells the duet between Alexandra Mein and Jalet took on a totally new dimension, as the natural culmination of an evening of savagery and civilization. The choreogrpahy centers Mein’s long, long black hair. First she whips Jalet with the hair which seems to have electrical properties until he finally he assists her in cutting it off. At that point, Mein perishes.

In between times, Mein flings herself around the shoulders, neck, arms of a Jalet who continues to travel at high velocity. Their embraces are rapt, desperate. The full senseless misunderstanding and relentless imperative between man and woman is taut in their fierce holds.

It was a pleasure to see dance and stagecraft thoroughly done in Tanzquartier for a change.

The difference between the work tonight and most of the young contemporary Austrian choreographers is that the work is finished. The costumes were made by a well known clothing designer working together with a stage designer.

By finished, I mean the decorations, the costumes, the lighting, the soundtrack. Someone has paid attention. To the point that between the three pieces on the top left corner of the stage, the name of the segment was projected on the wall.

Strangely the three pieces were not meant to be one at the start. Venus in Furs was a rather arch high fashion piece put together for one of those pouting Euro interdisciplinary exhibitions (Dysfunctional). Premise – to build a piece of choreography from a designer clothing item. Like Shelley’s Ozymandias, the work outshone the occasion and spawned Venari as a natural successor.

Aleko was rescued from Myth and added to the other two to make a full evening piece for the Tokyo International Arts Festival. And so by inevitable accident a splendid and coherent two person expression of Jalet’s fascination with the primordial was born.

Not to be missed if you are lucky enough to be somewhere where Three Spells passes.