A huge empty workshop at the Arsenal. An enormous set of windows letting natural light stream in from overhead. One hundred foot ceilings.

A crowd of one hundred and fifty spectators gathered around the dance floor. Most sitting on the ground. Some on chairs. More standing. 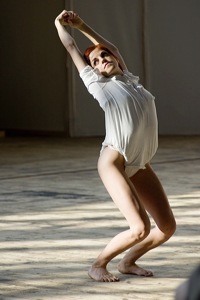 From the back left corner a pretty girl with striking red hair in a white dress wanders in.

Very tall, with striking facial features, Ulrika Kinn Svennson, is an alluring and mysterious stage presence. A native of Sweden she works in Le Ballets C de la B.

She reaches centre stage and pulls up her dress to reveal that she is in fact in diapers. She finds a ball microphone.

“I had it all…” she intones into her microphone, the tones of her voice being modulated through a very sophisticated soundbank of mixing boards, keyboard and three computers behind the spectators. Behind the boards is a very intense Andreas Berger.

“You can never understand me.” Her voice begins in the female register before being dropped into the male register. Somewhere near the province of transvestite acts with a confusion of gender.

Svennson is followed by a young man who walks out with a very awkward droid like step. He introduces himself as Johnny. Johnny Schoofs is a Dutch-based dancer, graduate of the Rotterdam Danceacademy. 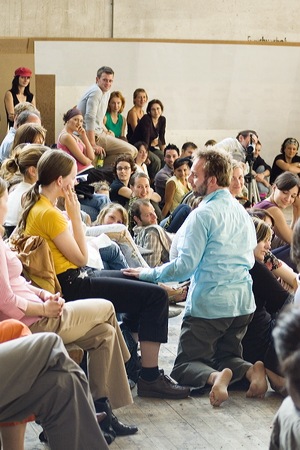 Schoofs does an “I am/I am not” dance to the sounds of his own voice.

are some of the interjections coming in quicker and faster and higher and lower tonalities from the sound system as Schoofs jerks around.

The technology of dance and voice is complicated and interesting but the skit carries on about twice as long as necessary. A nice touch is Schoofs’s exit through the crowd mingling with them on his way.

The third dancer to come out of the back corner is a long-legged young woma in skirt and t-shirt with a short pony tail pulled back. She delivers a long speech about celebrity and beauty and money. Nothing profound. The zeitgeist of contemporary North American culture. 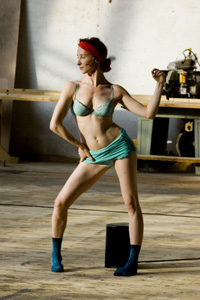 Cumming’s dance is an elaborate strip game. There are three layers of cotton under skirt and shirt which she pulls up and down. At one point she has all the tops up and we see both her stomach and a bra which she appears poised to pull off before she instead pulls her panties down around her ankles.

No worries. She has another two pairs of panties hidden. This is not to be a naked show.

The accompanying movement track of soundbites is one of conceit and insecurity. “I am so beautiful. You want to see me, don’t you.”

There isn’t much warmth in Cumming’s strip performance – it is strangely cold. The absence of charm may be intentional but the piece would be more engaging with some element of sensuality in the movement.

The final chapter of this experimental movement and sound piece is a trio with Cumming’s character controlling Johnny and Ulrike with commands like “Smell Johnny’s breath. But don’t come too close.” 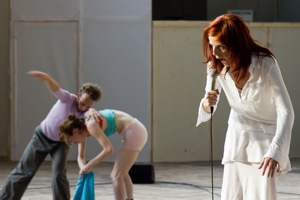 Much live manipulation of the sounds as we go. Impressive.

One phrase stood out: The space is so vast and generous.

But in the case of Liquid Loft it didn’t matter. The manipulation of sound by Andreas Berger was virtuoso-level. Ulrike Svennson’s movement performance was perfect. Cumming’s voicework was wonderful. Schoof had a goofy sort of charm.

A lot of work and thought went into the creation of this new organism of sound and movement. All involved deserved the very warm and extended applause to which the audience treated them. New roads were opened to us.

All photographs by Alec Kinnear. Do not reuse without permission.