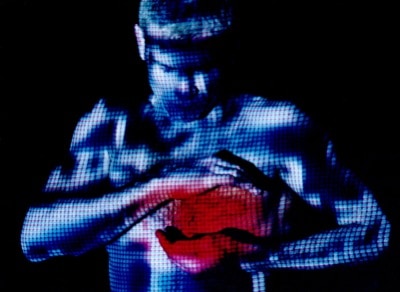 For the grand opening night party at Arena, Impulstanz began with an impressive multimedia show at eleven o’clock. It was the 100th representation of a 1998 collaboration from Chris Haring (choreography and dancer) and Klaus Obermaier (music and video). 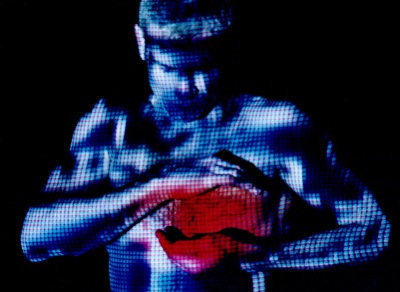 We had to wait for a long time for the show to begin as it was sold out and Impulstanz was doing their best to get as many people in as possible. Heavy industrial noise for a long time.

Finally, a quite stocky blonde man in his late thirties with platinum bleached hair strode out on stage. At some point he began to turn in circles. An image of himself was projected onto his spinning.

For much of the show, the dancer Chris Haring stood with his back to us. His bare back and the platinum back of his head and the white trousers he had on served as a screen for the projected image of himself.

After much turning, his projected image spoke and distorted itself and shrank and expanded, gradually expanding its repertoire of movement.

Quite entrancing for a time, but the distorted blonde video man trope reminded me too much of the original British Max Headroom character.

This went on for a very long time in different variations, standing and seated. But there was no real development. The whole piece was the exploration of a trick, a tool without either any real progression in story or idea to move it further. A high point was Haring’s transformation into an old man and back again.

The low point was towards the end when Chris Haring bent forward and a mouth was projected into the middle of his buttocks. A talking, quite vulgar mouth. A burping and snorting mouth. Vile. This did generate some amusement in the audience.

All industrial sounds and noise throughout the first half hour. The industrial noise convention has grown very tired, at last to my ear.

Finally some frenetic dancing under projected lights. Chris Haring moved very fast and very hard. Quite an impressive display of energy. There was some passable music to support this movement as well.

While there was nothing wrong with D.A.V.E., it just too long as a technology demonstration. Much recent art loses itsself in the how without the why. This was a perfect example. Any show which doesn’t have a developing subject holds about as much interest as a card trick. In a sense that is what D.A.V.E. is. (I’ve never much cared for card tricks.)

The finale when Klaus Obermaier joined Chris Haring on stage was a nice surprise. The two men look very similar with exactly identically died hair. Obermaier came out in a suit and with heavy rimmed glasses. The projection was doubled and the two men switched identity and then back again. This was a very good and brief card trick and generated a lot of applause. The peculiar physical resemblance between the two men even offered something to think about.

The party afterwards was very good including first rate DJ’s Karuan/Bionic Kid/Gajol and an excellent live performance from Tyler.

We could enjoy the concert and dancing inside and the courtyard outside at the Arena with the fine weather.

A young man from Mozambique amazed us all with his incredibly fast and seemingly tireless dancing, finding a movement for every rhythm in whatever music was playing. He sought tirelessly a dance partner is equal in speed and agility, a modern Prince Desiré carrying his glass slipper to all the dancers.