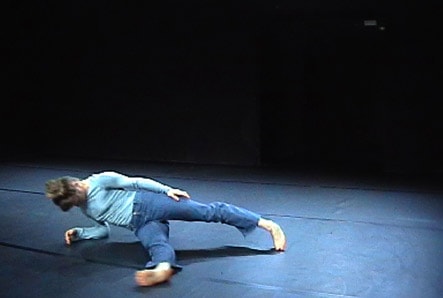 A bleached out video shows on a large plasma screen on the left hand wall of the theatre. It is a high-angle overhead view of somewhere in downtown Vienna in near-winter. People wander by four Mozart concert ticket sellers in capes. The ticket sellers talk mainly to one another as there are few of their habitual prey (foreign tourists) wandering by on the busy morning. A woman passes with her dog every five minutes, reminding us that it is a loop.

The video is important as it sets an urban environment, a bleached-out emotional landscape and a Viennese context.

At some point our collapsed dancer (Ingrid Reisetbauer, the choreographer) starts to emit guttural shouts.

Mainly a lot of sitting on the stage with a bored look on her face and staring at the audience with disinterested disgust. Reisetbauer’s character is attired in an ugly green top and ill-fitting trousers. Her hair-do is particularly pernicious, managing to be both up and mussy at the same time.

A lot of painful looking floorwork. 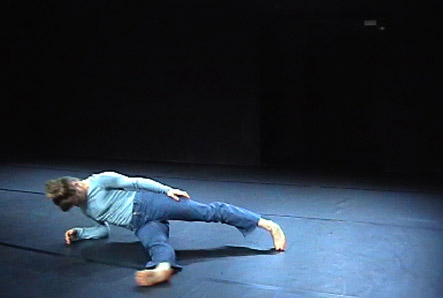 Later while Reisetbauer lies face down on the stage, she begins to pump her hips up and down hard on the floor. As if she were humping a lover. On her face the disgusted and bored look remains. In her emotional voyage, I think we are to understand that this is her sex life. Perfunctory and empty. Her lovers bring no more emotional content into her life than the floor.

In general we are facing an absolute discomfort with body and space.

Fist it should be said that in the tasks Ingrid Reisetbauer sets herself – generating discomfort, disgust, ennui – her success is outstanding.

I disagree with her ends in principle. To my mind, dance is supposed to bring one closer to one’s body, not drive one further away from it.

Towards the end of Drängen, Reisetbauer leaps off the stage and lingers a moment in front of the audience as if searching for a victim upon which to hurl herself. Given the extremity of her performance the audience is genuinely discomfited to find her persona among us.

Happily enough she trots up to the back of the auditorium and disappears. An empty stage. Silence. Reisetbauer reappears to sing out loud and discordantly and repeatedly hum.

And thank heavens it is finally over. Twenty-five of the longest minutes of my life.

Another Vienna piece, like the one from Philipp Gehmacher, about boredom and disgust with urban life.

Here we are facing an ugly if clear performance by an artist who makes herself as insupportable as possible. In difference to Gehmacher’s incubator, at least Ingrid Reisetbauer moves around – Drängen is legitimately a dance piece. Again, unlike Gehmacher, Reisetbauer is succinct in delivering her dour life statement.

But neither incubator nor Drängen have anything to do with life in Vienna, whether mine or those whom I know. Vienna is a beautiful and lively city, filled with all kinds of delighful and gorgeous people.

Some part of the modern dance crowd seem to have mutually poisoned one another to all light and beauty. I wish they would find themselves a support group instead of inflicting their angst on the public.

The stürm und drang of early French existentialists but without the languid expressiveness of Camus’ or Sartre’s texts.

Decades of work from Tanztheater Homunculus, Tanz Company Gervasi and Impulstanz itself have gone into building up a modern dance public. My concern is that these tanzextentialists will drive all audiences from dance theatres in this city. And then life will really be bleak. In a worst case scenario, we are facing a self-fulfilling prophecy.