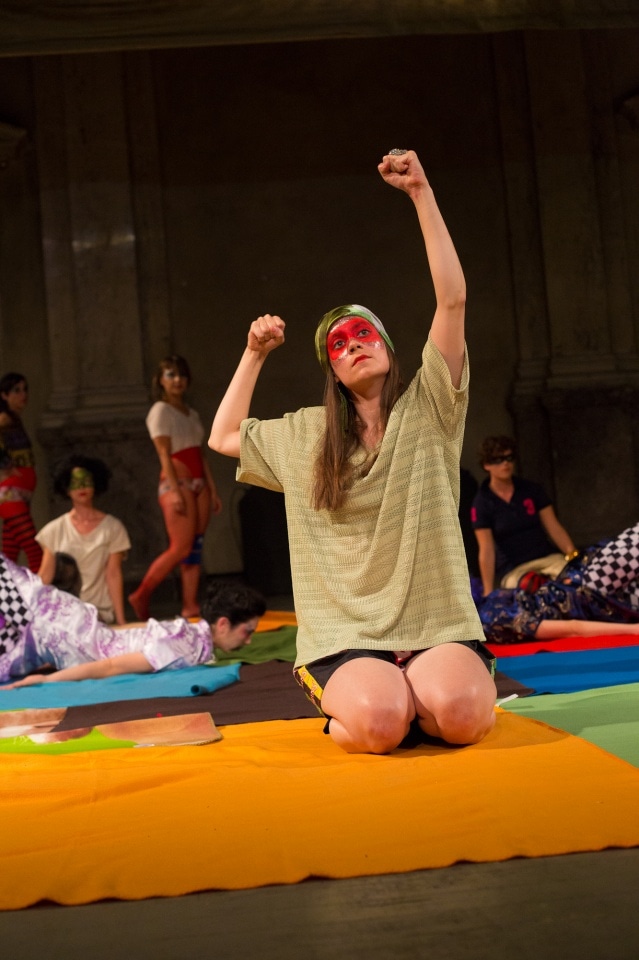 Marten Spangberg in “The Beach” deliberately takes us into an alternate reality. There are enough problems with this world, why shouldn’t there be a different better parallel one.

The first music we hear is dreamy psychedelic sixties music played softly. The stage is covered with technicolour blankets. The cast stroll in slowly, positioning themselves on the blankets.

Spangberg’s “The Beach” is a rich colourful world.

Looking at his stage with reds, blues, yellows, purples and his cast in emerald, ruby, topaz and sapphire clothes, we are reminded about how much colour is missing in our own lives. 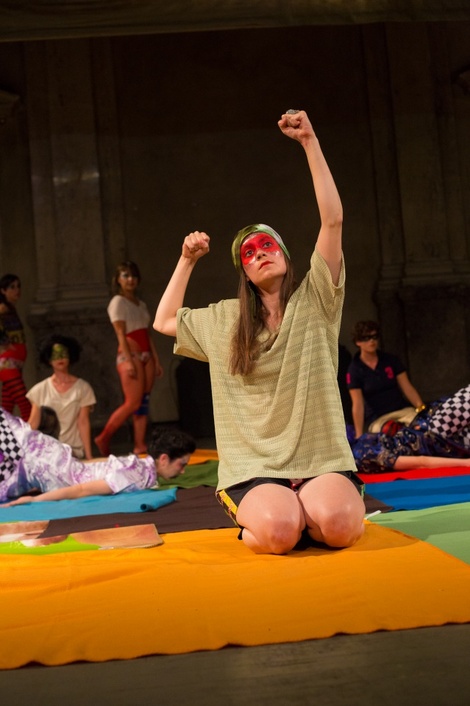 The movement is centered around a young woman with long dark hair, wearing a red mask with gold glitter on the border. The mask fits her face perfectly and we can see her eyes. It turns out to be makeup. Little details like getting the mask right make “The Beach” special. Other girls have similar masks or cat’s whiskers. A boy wears a small clown nose with just part of his face in white and his eyes made expressive with liner.

The journey starts slowly. Everyone is moving in slow motion for the first hour. The large cast assemble themselves on the blankets in a kind of still life. They move but very slowly. They belong to each other and we are observing their world. All are extremely focused and present. Strangely for a piece with so little action, it’s not boring.

Two of the girls dance some sort of cross between gogo and cheerleading and ballet while blowing chewing gum bubbles. The popping bubbles performs perfectly Brecht’s estrangement (Verfremdungseffekt), not allowing us to relax or become complacent as we observe. The dancers are EXOTIC in the true sense of the word, i.e. unusual. 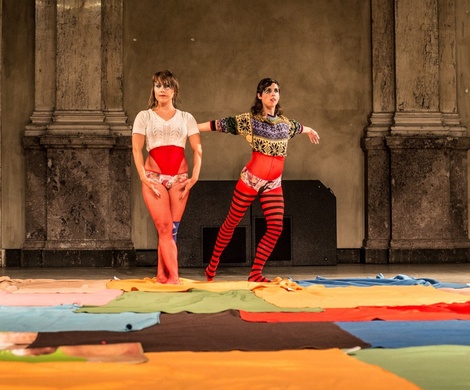 From contemporary music, Spangberg now takes us into the Baroque. His lead dancer with the red mask leads the others in a ritual of prayer with special hand gestures.

Part way through a second set of dancers in long satin evening gowns enter very slowly and take space at the left hand front of the stage. With them, they have shiny packages with presents in them. Are they some modern three wise men or are they Paris Hilton’s cousins. For these roles, Spangberg has recruited Jennifer Lacey and Kroot Jurak (third dancer unknown to me). All three are very strong stage performers, able to carry a show on her own.

This is what is special about Spangberg’s work. While it is about the concept and the moment, he does not think for a moment that a performance can thrive without first rate artists. On his stage along with the workshop performers, there are at least five special recruits, each of whom brings something special. I’m not quite sure how or why Jennifer Lacey assented to this role – as “The Beach” isn’t something I think she’d like from the outside – but as the snobby lady with shiny bags of presents she was excellent. Jurak didn’t give her strongest performance but her physical height and stage charisma made her a valuable addition to the show.

Behind the three women bearing gifts and further stage right were another group of dancers interacting among themeselves.

At this point, Spangberg has three stages running at the same time. The Casino space is perfect for multiple stages. Spangberg was the only one to exploit the space fully with multiple points of performance at the same time. A modern audience is so used to juggling internet, handy and television at the same time that concentrating on three things at once is easy to us and allows a richer experience. Darrel Toulon and Oper Graz worked prolifically for the last two years in Wilder Mann on symphonic wide stage productions. Hopefully next year other choreographers who work in Casino will make such good use of the space.

After nearly an hour of slow motion and ritual, pounding rock hits the speakers now. The girl with cat whiskers and a man in a buddha robe hand out little painted twigs to the audience. The act of giving a gift, just like what we saw on stage.

The dancers put on modern white tshirts with catchphrases like “I love Vienna” and “I love Paris”. They start dancing very systematic but rather mundane steps in a vast cycle. At this point, Karl Regensburger, Rio and others of the ImPulsTanz artistic direction dropped in and walked out within a quarter of an hour. But without the slow motion and colour of the beginning, this section wouldn’t make much sense. It would be wonderful if they would take care to see whole shows, especially when as controversial as Spangberg’s work.

The dull repetitive steps in some way recall modern life, so far from The Beach. Every day we go to work, answer our phone, answer our email, go out for drinks, talk to our colleagues in an endless routine. I’ve done my best in Foliovision to make every day special for the people working there but modern life is a noisy routine. We aspire to get back to the beach.

The repetitive modern steps make a certain amount of sense. Even ballet was a formal expression of the steps of the day, minuet and court dancing. So Spangberg taking the night club and walking steps of our day and ritualising as dance movements makes complete sense.

Spangberg is very politically engaged. We need to break out of the world of privilege. In the sixties for a very short while society managed to wake up to the world we are missing. There was a great deal of seeking going on and questions being asked. Women acquired new rights, many countries were liberated, eventually wars were put to a start, the fight against apartheid began. The journey was spiritual for a few years and not material.

By the eighties, society had gone back to seeking money and aspiring to drive a Porsche. The world was an empty glam one. It is this world which part two of The Beach reflected.

A third part began with some psychedelic trance music. The dancers took off their white tshirts and dressed differently but colourfully again. Almost all of them began to dance. The audience started to dance too. Many audience members had walked out during part two and missed the atmosphere of joy and love in part three.

Half the remaining audience got up on their feet and were dancing in the tribune in Casino. With just a slight change in the air, everyone would have been dancing. There was this wonderful feeling of having been on a journey somewhere together. Many stayed in the room and talked animatedly to one another after the show.

“The Beach” is a special place.