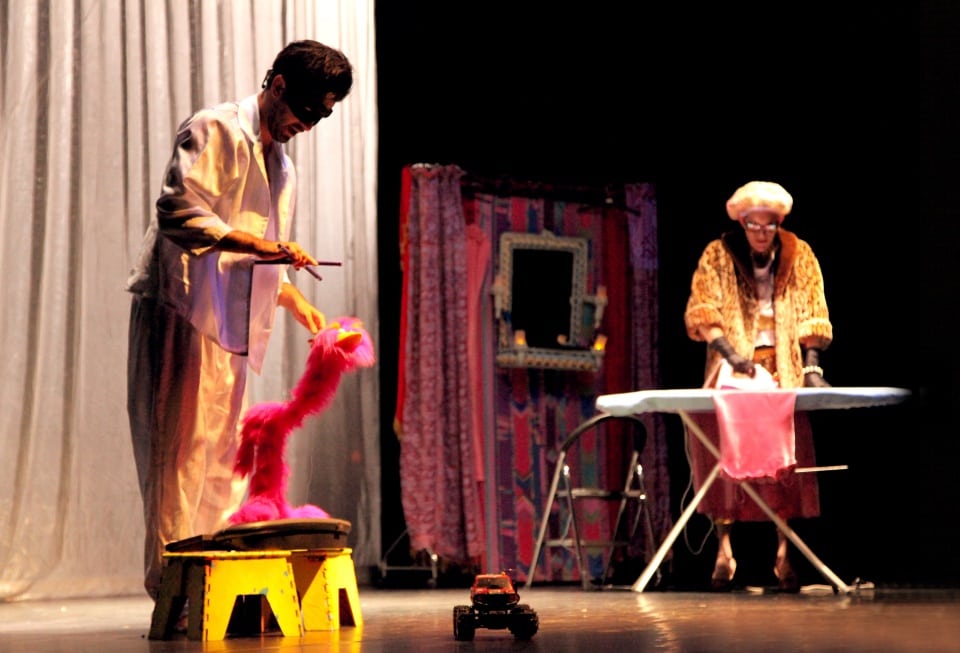 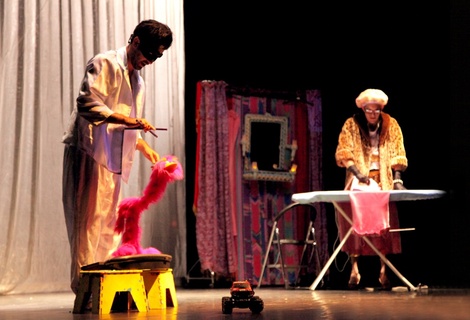 Tompkins in particular is a chameleon. He starts the show as the mother of the performer in high heels, gold spandex pants and a hair net over rollers. Later he reappears as a chorus dancer, later again as some kind of melancholy Sinatra figure. With his enormous eyes, distinctive nose and pouting mouth, one would think Tompkins would always look like Tompkins but each time he is genuinely different. When he first appears in a suit, he looks just like a later career Peter O’Toole, wittily observing the pageant of life leaving him behind. 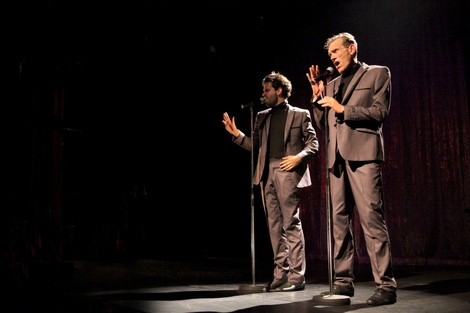 Even the props carry additional resonance. The magic box is decorated in primary colours with large text on each side “What is war” or “What is beauty”.

This is not empty noise or self-aggrandizement. Tompkins constantly poses himself the question why:

The most difficult thing about duration, is how to avoid repeating one’s self, how to avoid fabricating a machine to produce performances. Every new work is an occasion to put into play our habits, our certainties and question again our desire – and now, what do we want to say, what is important for us today ?

One of the most powerful numbers is “In Love with the Boy” where Tompkins tells a story about a desultory and tragic love affair with a beautiful Hollywood young actor. Grenier’s interrupts Tompkins with “Boys, boys, boys” before Tompkins forces Grenier to return to his song of lament.

Throughout the show the technical work was great, with a two sided clothers rack doubling as room decoration for the apartment and alternative stage curtains with a simple spin. To create the atmosphere of a techno club, an old guy wanders across the stage strewing glow in the dark cord. This sets a credible stage for a dancing buddha. Little touches like this are what make “Opening Night – A Vaudeville” so delightful and resonant.

It would be great if the Vienna performance artists would visit Tompkin’s and Grenier’s piece to learn how real work in this area is done: with years of training and months of specific practice. Tompkin’s work proves that there is no reason performance should be synonomous with amateurism.

Mark Tompkins is a very impressive singer/songwriter independently of his performance work. His songs are like a happy cross of Lou Reed, Leonard Cohen and Bryan Ferry.