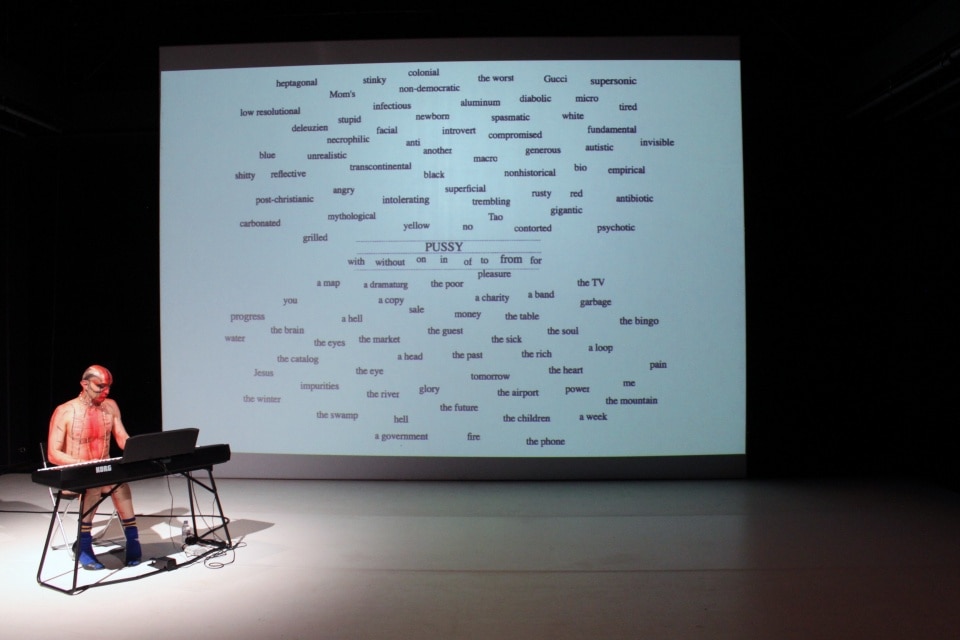 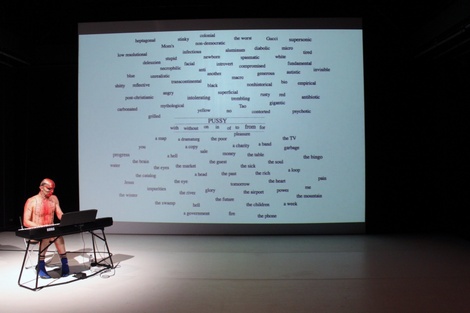 So instead, he’s set up two computers on each side of the stage with direct chat into his own screen in front of the piano. He needs volunteers to type poetry which he will perform live. He does a stint and fairly successfully turns the words of others into some kind of meaning. Dimchev twists and repeats the words as he pleases, something like Van Morrison, something like Celine Dion, squeezing emotion out of each phrase even where there is none. A nice lesson on the tricks of “touching” vocalists”.

Now he wants performers. Some people dance for €30 while new poets type for €20 (I participated in this round – Dimchev pulled 90% of his text from my stream of consciousness stream although not without complaint – he wants his lyrics very lean).

Next round. He needs volunteers to kiss for €50. A pretty girl presents herself right away. Just what a hungry dancer needs. Exposure on stage and €50. Two guys fighting over the gig to kiss her. Dimchev swaps one of the guys out and sends the first kisser to the keyboard. The other guy gets to kiss. New information: the kiss must be topless. The girl doesn’t flinch. As well as I can tell she’s likely a real volunteer. I know that I wasn’t a plant in the audience.

The music starts again. The girl rips off her top and shows off a small but lovely pair of breasts with perfect pink nipples. No wonder she wasn’t alarmed: she’s playing to her strength. The dark haired guy has a dancer’s body and a handsome Italian look. But the girl was a much, much better kisser than he was. If she’s single, it was good advertising.

Dimchev asks the audience afterwards if we can go further. “Much further” someone shouts out. Dimchev agrees. The next two volunteers will get €200 each for their performance.

We catch our collective breath. What on earth will they have to do to earn €200? Still there’s another pretty girl with a funky calf length blue dress and long braided hair who is on her feet and the handsome mulatto guy in front of me with the cap is ready to go as well.

Dimchev says “Okay guys, I need you naked on stage, fucking and breaking my heart with your passion. Are you still on?” Dali nods. €200 is not pocket change. Tall, beautiful guy nods too. He’s not complaining. “You were in one of my workshops years ago, weren’t you Justin?” “Yes, yes I was.”

Dimchev dashes back to the safety of his piano, Justin and Dali strip right down. Dali has a pretty face and a nice stomach and butt. Her small chest is adorned with a funky hanging necklace which she keeps on during sex. Justin is gorgeous at 195cm, all muscle, no fat, long and lean. His milk chocolate skin is adorned with a beautiful circular tattoo which covers most of his back.

It takes the two of them some time to find the right position. They start standing up. When they hit the ground, Dimchev sternly admonishes as he plays: “No laughing, I’ll reduce the fee.”

With much less than €1000 cash, Dimchev has become ultimate lord and master over the entire room. He has audience members simulating sex in front of 300 strangers. Despite a few walkouts, Dimchev has turned 98% of a bourgeois theater audience into peep show patrons. This is an incredible proof of concept and an outrageous dark joke.

Dali went to serious work mounting Justin with his help. We could occasionally get a peek at Justin’s manhood. I was quite concerned that simulated sex might turn into the real thing, but it turns out the Justin didn’t even get to half mast. A simulated sex gig with Dali is a toddle in the park for you if you’re gay.

Dimchev sang about losing you and sex and then brought matters to a very brisk close. “Alright everybody it’s over. Put your clothes back on and collect your money.” The artists were so eager for their money that they collected the money still naked.

Dimchev started the bows. Just as the hill steepened, the show was over. There was no ringing epitaph, no interpretation, no coda just the raw facts: people has just taken small amounts of money to kiss topless and to simulate sex.

There is nowhere further for the show to go. Well perhaps the woman could urinate onto the man’s face for €500 each. Or they could have real oral sex. In any case the next step is probably technically a crime, although Austrian stage laws are pretty liberal.

I’m still puzzled. The party trick works as the escalation is gradual. Start with dancing a little bit, to kissing, kissing with top off, simulated sex. There’s nothing people won’t do for a bit of cold hard cash. Dimchev’s dark cherub grin will not leave me soon.

If you have the chance to go and see the second show on the 12th August, do.

Ivo Dimchev, “the P project.” 12th August in Kasino am Schwarzenbergplaatz at 19.00