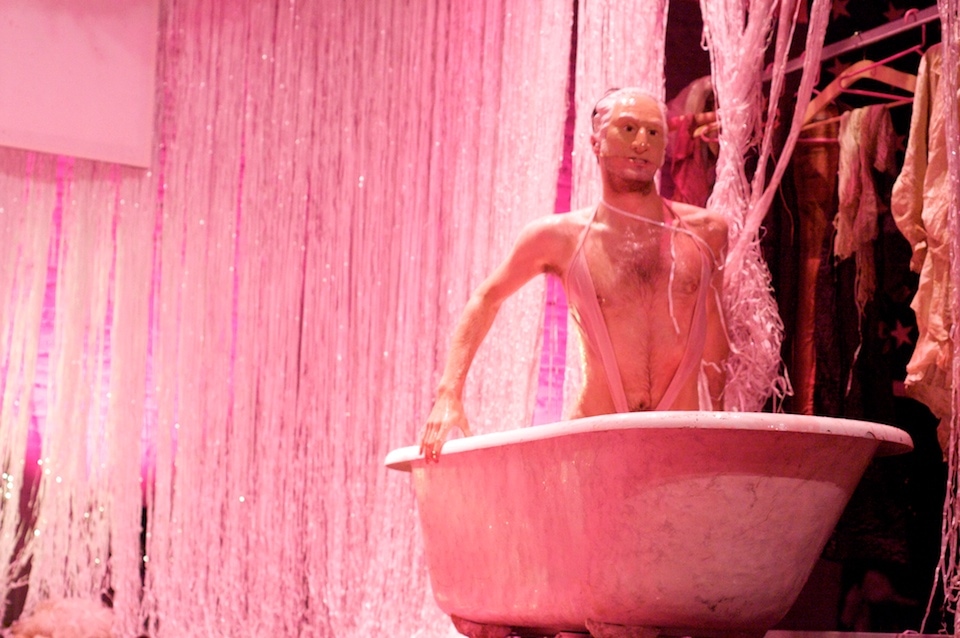 ImPulsTanz 2009: The Bagwell in Me – Ann Liv Young

The Bagwell in me begins with a man in drag in a bathtub with his/her feet up. 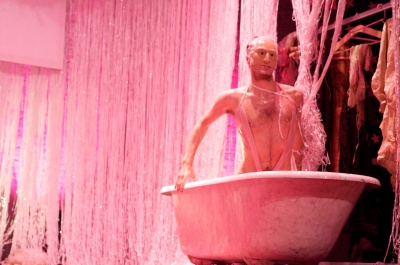 performance begins – man in a bathtub

"Hi my name is Sherry, feel free to stop the show and ask us any questions as we go."

The audience for the most part is quiet throughout the evening despite Young’s attempt to knock us out of our stupour.

Ann Liv Young is hiding behind a white plastic bead curtain at a table with a Macbook Pro on it.

Her opening question kicks us all in the crotch, men and women. "Have you ever been in a relationship with someone who can’t get it up?" The voice is steely and male coming through a distortion filter like the one they use in horror films. 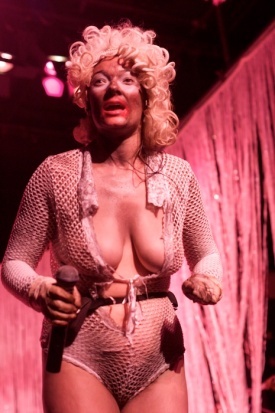 "Have you ever lived with someone you can’t fuck?"

This was just the prologue.

Ann Liv Young is a phenomenon unto herself. The Bagwell in Me is the third production I have seen and reviewed. Each year Young takes her on stage shock therapy further. The first year, for Melissa is a bitch it was just fat girls naked dancing to pop songs and a lot of dirty talk. For her last visit two years ago with Snow White it was penetration while Young was seven months and very visibly pregnant. 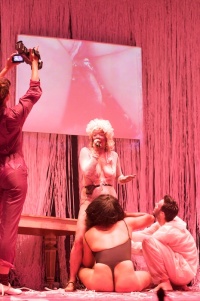 Beyond her joy in shocking and disturbing people, what seems to concern Young is hypocrisy and injustice. At a deep level, Young feels life is unfair and she and her friends are getting the short end of the stick. And she will make society pay for her suffering. Here Young is attacking blind American patriotism and its foolish jingoist ideas. George Washington is known as the greatest American president and a freer of slaves. But as Young points out, Washington’s slaves were freed upon his death when he no longer needed them. Which makes Washington first and foremost a slave owner. Young asserts that Washington was the father of one of his slave maids children. Naturally his wife Martha objects. Young’s vision is very dark indeed: the story ends with the maid in prison and George Washington sexually mutilated. 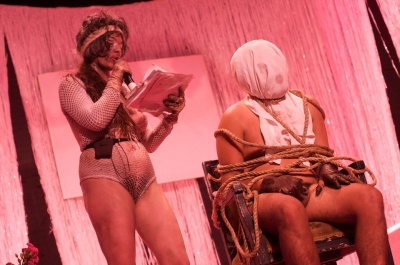 Michael with towel over his head & Ms Young as Martha

The two strongest moments in "The Bagwell in me" are the dialogue between Washington and his wife Martha and the dialogue between Martha and Oney Washington’s slave mistress. Young plays both parts most of the time, switching frenetically between voices. Apparently there is a version of The Bagwell in me with another female performer, who perhaps handles the second role sometimes.

On Sunday night a videographer Jaguar in a zipped up purple jumpsuit filmed the entire performance. Her prim suit and hairdo was a striking contrast to Young’s open legs and wild flying hair. Young told us that Jaguar was only there that night – but an integral part of the performance. Young’s work seems to follow a rough scenario but with episodes which can change as it strikes Young’s fancy. She plays off her own mood and that of the audience. 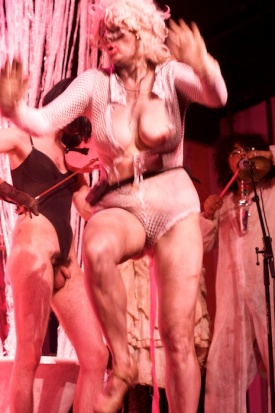 Ann Liv The Bagwell in me

The contrast between her controlled reasonableness when she comes out of character and her frenzy in character is exceptionally Brechtian. Young lets us lose ourselves in her experiential world and then knocks us out of it and asks us to consider seriously her ideas on subjugation of races and women.

Someone at the end of the show asked why so much sex?

The show is about an illegitimate child, Young explained. Contempt and quiet rage slips into her voice as she explains the obvious. "How do you get a child? Only by fucking, so if that’s what my show is about, why should I hide the fucking? Of course there is sex. You would have to be really stupid or really naive to make a show about an affair and hide the sex."

When I asked her why she wanted to treat this particular theme, Young went into the ramble you can read in the program about her forefathers being slave owners and visiting distant aunts living in southern estates in Virginia with what are now called black maids instead of slaves. Hogwash, I say. There are deeper reasons Young is obsessed with sexual hierarchy and legitimacy. I’d like to know what they are. Young also seems obsessed with infidelity and the pain of women reluctantly sharing a man both want.

While to retell it all of this sounds merely sordid, Ann Liv Young is a consummate showman now and the show rarely flags. She skips from one hysteria and pop song to another bringing out the voyeur in all of us. You don’t want to watch but you must as she commits one effrontery after another and orders Michael her common-law husband and father of her child around with despotic nonchalance.

The show alters between explication and explicit sex to karaoke numbers as varied as "Billie Jean" to "Slip Sliding Away" to disco to strange cute pop songs from the 1920’s. Young doesn’t sing too badly considering the limited attention she pays to her singing.

While The Bagwell in me didn’t perturb me much, I’m not sure I will be able to handle Young’s next show.

At the end, Ann Liv Young seemed very concerned that we felt we got our money’s worth. Her question set me thinking on what terms? I once heard live sex acts in the New York area run about a $100/head admission so at 25 euros perhaps The Bagwell in me is excellent value. On the other hand, there was scant little dance or much uplifting. Ann Liv Young is a sexual enigma wrapped in scatological mystery. Be glad that she is selling visitors passes to her world and not one way tickets.