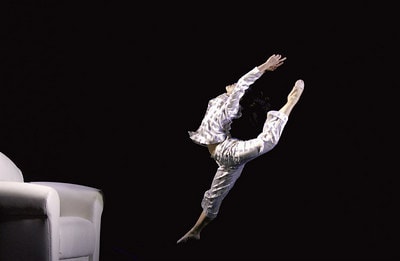 Once far away in the middle of Austria in the province of Styria in a town called Graz, there was a choreographer from distant lands who decided to work through the entire classical repertoire making modern ballets. First he began with Cinderella then Romeo and Juliet, breaking traditions at every step. Finally he came to Tschaikowsky’s majestic but interminable work – Sleeping Beauty.

What was this innovative choreographer to do with two and a half hours of music? What was he to do with the endless variations of fairies, good and evil?

Well he invented a new story. The story was no longer about Sleeping Beauty but about a child. A child who loved fairy tales. This child had parents who came out of 1950’s America. Daddy wears a little cardigan dress and Mommy a very neat and chaste dress. Well except that Daddy has a drinking problem.

The little girl loved fairy tales so much that she begged her mother to read them to her every night. But often her mother wouldn’t let her read the end of the fairy tales. In every fairy tale hides a wicked and lewd truth.

At least in Darrel Toulon’s Sleeping Beauty that’s true. Artistic director Toulon’s probably right. The psychoanalysts have always been obsessed with the dark side of fairy tales. 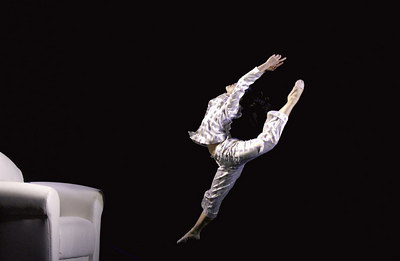 Young na Hyun as the Child

What we see on stage is quite wonderful and inventive. We begin with a huge book of Sleeping Beauty, twice the height of a person. A giant white armchair for sitting in when reading a smaller but family bible sized version of the fairy tales. A little girl in a pyjama suit in that armchair (Young na Hyun). Her doting parents (Ana Baca/Tamás Topolánsky). And through a screen a medieval contraption on which an absurd wizard peddles spews flames and sparks.

After a nightmare in which blackclad wraiths torment her, the child becomes delusional.

Concerned about the psychological well-being of their daughter the well-meaning parents invite a team of about twelve medical specialists to examine her. The first major dance is the dance of the doctors. The wraiths from the previous scene throw on white medical coats and take over the family home, keeping the father away from the daughter and tormenting the daughter with every kind of examination, from reflexes to eyes to ears to a stomach pump. In groups of three or four they carry her high above their heads.

For anybody who has medical phobias, we have left fairy tales and entered grim reality.

The speed of the change from wraiths to doctors and the quantity of movement and excitement on stage is totally captivating. 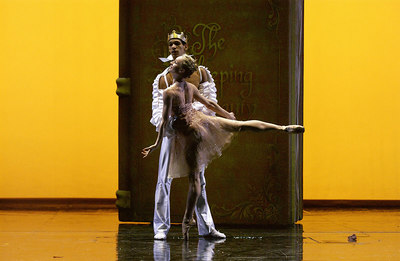 The big book of fairytales and Livia Hyllova as Princess Aurora

A little later on the back of the stage open up to reveal a fairy tale prince and princess high above the audience. Their palace parapet sinks to stage level where our child heroine joins them for a dance.

This love of stagecraft carries through the whole production. With a minimum of sets and props, Toulon and Anne Marie Legenstein and Alexandra Burgstaller create whole kingdoms. What few sets there are have a chameleon quality – one moment a palace, another moment a prison, later a garden.

Just after the doctors dance we are treated to the dance of the baby carriages where the entire corps-de-ballet comes out in short white dresses and broad brimmed sun hats pushing white baby carriages – the men too. Suddenly we are back in the world of upside down 1950’s musicals.

The king and queen (William Süll and Natsu Sasaki) have some very hot pas de deux occasionally interrupted by Fée Carabosse (Michal Zábavik) who in Toulon’s Sleeping Beauty is a virile man.

The sexy romantic couple have engendered a baby, which our Reader-Heroine must protect. Suddenly she is being chased around the stage by the wicked Carabosse and his posse – carrying a huge doll.

Later the huge doll grows up and joins her parents – a radiant valley girl princess in yellow and blue silk. Her first suitors turn up in hip-hop clothes and motorcycle suits. Here the choreography lags for the first time. The hot moves of the three princes comes across more like Donny Osmond. Somehow we miss the mark, until Fée Carabosse turns up in purple, manhandles Princess Aurora, rips off his own top, revealing a gorgeous and ripped chest and abs. He then promptly decides to rape the princess. She has ambivalent feelings about being ravished.

But the princess isn’t enough for Toulon’s Carabosse – he comes after the Reader-Heroine next. The whole ballet for better or worse degenerates into some kind of scene out of Peckinpah’s Straw Dogs.

Finally Princess Aurora falls to sleep and the castle is overwhelmed by thorns. The thorns are played by the corps-de-ballet again, this time in dark green body suits with enormous claws at the end. Unfortunately somehow they looked more like dinosaur crabs than plants. The dance of the thorns really drags. For the first time we lose track of our Reader-Heroine. Eventually a prince stumbles through with a huge thorn pierced through him. This is somewhat convincing until he does an endless and absurd dance of death with this huge thorn supposedly piercing his entire torso.

I feel like we are being pushed by the music here, rather than the story. Either that or this is a Brechtian twist of estrangement to make sure that we don’t become too wrapped up in the story. Prince Desiré arrives at last to wake up Aurora and the stage changes again. The thorns are gone and a starry sky is the backdrop.

Desiré for unknown reasons is some kind of Liberace clone with huge fluffy white sleeves and white satin pants and thick dark locks. He is totally out of place next to the hip-hop crowd we had earlier. 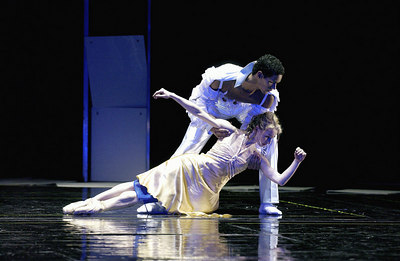 When Aurora and Desiré dance the rapture is surprisingly sexless – unlike when all the other dances. What’s the message? That true love has much less sexuality. The Reader-Heroine snuggles between them and we live happily ever after.

Aurora is radiant but we tire of her fixed ballet smile. Her one note ballerina performance seems an ironic observation from Toulon on classical ballet.

The third act Sleeping Beauty is highly problematic. By the end of act two, Aurora is already married to her prince. Where do you go from here?

In 1890, Petipa and Vsevolozhsky had a clear answer. To an entire act dedicated to the marriage celebrations. To interminable variations and pas de deux.

And instead of dropping the whole third act and sending us home at a merciful hour, Toulon for some reason here feels bound to follow tradition.

Aware of his audience – in large part families with children – Toulon shifts the focus from the grands pas of the fairies into some kind of excursion into a Disney-like world of fairytales. He brings out the seven dwarves in florescent the Reader-Heroine becomes their Snow-White. We also have the wolf and we clearly have Puss in Boots, albeit much sexier than in the original. There is some kind of dog as well.

The wolf is up to some kind of no good which results in him eventually getting slammed to death in the pages of the giant book. The brutality of this death is not out of place in fairy tales which are much rougher than we give them credit. It makes a nice allusion to the end of Charles Perrault’s and Battista’s original versions of the Sleeping Beauty story (dropped in the Brother Grimm’s Dörnroschen, the Petipa Sleeping Beauty and in the Disney film – which appears to be based closely on the Petipa ballet in turn based on the first half of Perrault.

The children in the audience seemed to really enjoy these shenanigans. Toulon managed to sneak in the grand pas de deux of Aurora with Prince Desiré, along with a variation from each of them. The whole act was a clever wink at the original Petipa arrangement, moving the emphasis from the Fairies’s variations to the character dances.

I don’t like Petipa’s third act at all, so given a choice between a traditional Sleeping Beauty third act and Darrel Toulon’s cartoon version, I prefer what I saw in Graz.

At the end of whole thing, I have to ask myself why make all of this new invention on Tschaikowsky’s overwrought score. On the other hand, why not?

Toulon manages to take the classic and put a modern edge into it with complicated reflections on sexuality. I dislike intensely his conclusion that the love between Aurora and Prince Desiré should be platonic and that platonic love is the highest form of love between two beings. But it is an interesting hypothesis, coherently argued.

I look forward to seeing some of Darrel Toulon’s own work where he is free to create the world of his own ideals and his own aesthetic. His Sleeping Beauty seems to be something of an exercise in the reinterpretation of a classic rather than a strongly motivated artistic work in its own right. But the original Sleeping Beauty was a showpiece ballet as well – an attempt to give great variations to as many as possible of the full stable of prima ballerinas in 1890 St Petersburg (many of whom had protectors in the royal family and the court). Sleeping Beauty was devised as a crowd pleaser by theatre director Ivan Vsevolozhsky.

And the Graz Opera was full and the audience very satisfied. Which for high dance these days is already a substantial achievement. And after enjoying this Sleeping Beauty, the audience is certainly part way down the road to opening to a wider range of dance than ballet classics.

The Graz orchestra plays beautifully, at a standard not up to the Staatsoper but certainly in the first rank of ballet orchestras around the world. Curiously there isn’t enough space for them in the pit, so one of the director’s lodges is turned into an impromptu large percussion pit. Theatre regulations suggest a maximum of fifty musicians can fit into the pit. Somehow the Marinsky under fierce conductor Gergiev managed to get seventy-six in there!

Good performances by all with Carabosse and the Reader-Heroine making
the most of their lead roles. Aurora was very good if a little bit too
on a single ballerina note. I’m still not sure that the single note
can’t be placed on Toulon’s own shoulders.

What impressed me most at the end of the day were two things. First, the recasting of the original story with an entirely new heroine as a metastory (the metastory didn’t seem to offer any new conclusions). Second, the stagecraft. There were a lot of things going on on that stage – the theatre space was exploited to maximum advantage – a great achievement in face of the hopeless minimalism of most dance productions outside of the Pina Bausch. In terms of the dancing, things peaked a little too early with the dance of the doctors by far the best dance with the possible exception of Aurora and Carabosse’s violent but powerful sexual encounter.