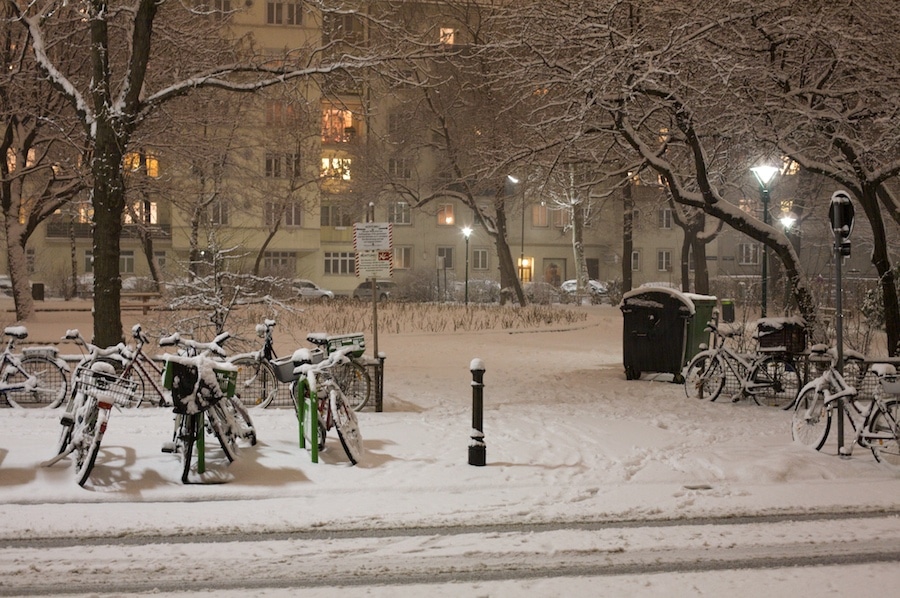 Some of my friends (including the Viennese occasionally) wonder what it is about Vienna that I love so much. I wouldn’t trade life in Vienna for any city on earth. So there will be a few photos to show you the magic of the city.

Here are the bikes outside my place. 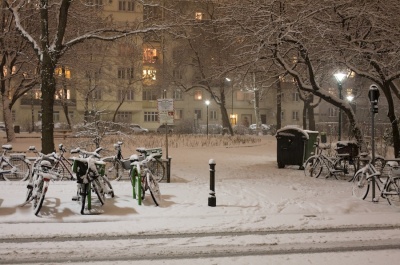 Bikes in the snow

On the way across Stadtpark there was a lady in the park with a camera and an umbrella. I like how the traffic lights turned Stadtpark into a late February Christmas tree. 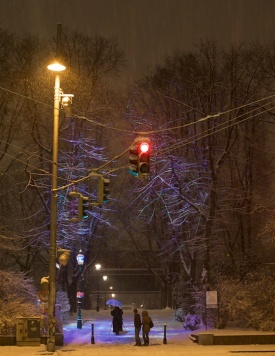 Crossing Statpark one passes by the old canal which flows into the main Donaukanal down by the Urania Kino, home of the Viennale. I have tried to photograph these lamps before but the snow really takes the whole scene back to the eighteen hundreds, one sees gas lamps and expects the sounds of carriages. At Porgy and Bess it was the opening of the Austrian Accordeon Festival (next time you might want to order a website from Foliovision – we’ll give you a special offer – and some photos from Max or I). I had come along to see child wonder Paul Schuberth play his orginal compositions but the fourteen year old was long gone replaced by some crazy raucous Polish accordionists, The Motion Trio.

Janus Wojtarowicz leads Marcin Galazyn and Pawel Baranek. Wojtarowicz sits center stage and strides back and forth between his fellow musicians, half actor, half band leader.

When somebody is really passionate about what he or she does, the enthusiasm is contagious. For these accordeons, Porgys was electric like a rock concert. 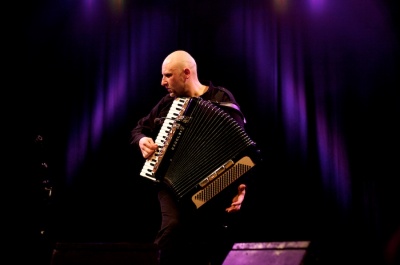 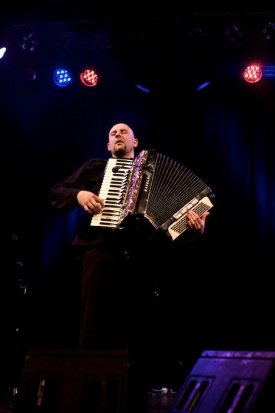 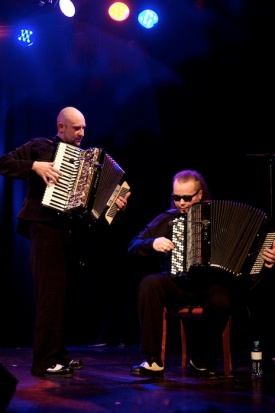 There were a lot of beautiful women at this strange accordeon evening. It turned out most were Polish, out to support the lads.

Anya was down from Pozen, Joanna her cousin up from Bratislava where she has been working the last six months on an epic production of Gorki’s In the Depths rewritten as Emigranty. Gorki’s unfortunate victims of the revolution find themselves in Berlin or Paris (an unnamed Western European capital) disoriented paupers, left to sort out confused lives. If you are in Bratislava in April and have a taste for latter-day existentialism, look for it. 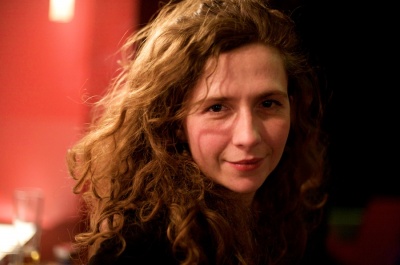 A good conversation about theatre and performance. She on the theatre side no more wants performance artists than I want them on the dance side. Down with performance! Up with theatre and dance! Joanna says the performance crowd treats the stage like it’s a game, they don’t take it seriously enough. I’d agree – it’s like oversized art therapy. But art therapists are paid for their time, and these scoundrels expect us not only to lose our time but to pay for them for the privilege. We agreed if we are to invite people to come to the theatre for either dance or drama (or for the love of the heavens above both at once, but not, just not, never performance) – we will give them emotions to take home. We won’t just sit around and stretch our legs and expect them to admire our inconsequent selves, like deformed Narcissae.

Also out that evening was photographer Max Moser with whom I collaborated on the illustrated Die Fliedermaus review earlier this month. We had a small contest with our cameras – who could focus faster and better in near darkness, a Nikon D300 or a Canon 5D. Alas, Canon (and I) lost that contest many times over. It wasn’t even close.

On we went to nearby Gartenbaukino where Hans Hurch had organised an Oscar Gala Party. What is a tribal leader of indie cinema is doing organising Oscar parties? In any case, an Austrian independent film Revanche was in the running so he had his excuses. 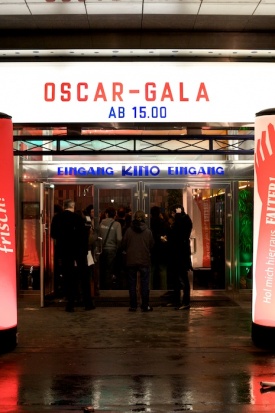 Free Sekt was promised to those who turned up in formal attire (it was still Fasching and ball season). Alas, few did. Gartenbaukino Oscars breakfast 3am:
sehr gemütlich time had by all 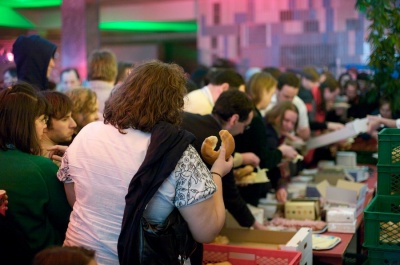 But the theatre was packed. I had expected it to be just one third full. Apparently Vienna is becoming ever more cinephile.

It was a bit of a contest between those who came to talk and those who came to watch. Not all of us were taking it very seriously. I was surprised to see Heidi Klum had trouble putting coherent sentences together in German. I hope she makes more sense in English – although she carried off her bright red dress very well. Anne Hathaway was indescribably lovely. Hugh Jackman made the opening of the ceremonies genuinely funny (I don’t think I’ve ever seen them that exciting), singing, dancing, joking, romancing from one sentence to the next.

The films seemed pretty dire – if that’s the best 2008 can offer, I hope 2008 was an off-year. No wonder people are losing interest in Hollywood.

Curiously enough Russian director Timur Bekmambetov was up for a couple of prizes (for sound editing) for Wanted. Wanted doesn’t look to be much of a film – just pulp CGI in a flashy ripoff of Fight Club crossed with The Matrix.

The last time I heard Timur’s name was in a conversation with Dmitry Dobuzhinsky, then producer at Video International and who had worked with Bekmambetov on the prize-winning Bank Imperial TVC’s.

I needed a star director for hair commercials or dog food – I can’t remember which now. I wanted Bekmambetov.

"No can do," Dima explained.

"Why not? You can get anybody," I flattered him.

"Not Beky," he mourned. "The numbskull’s gone and got into his head to try to be a real movie director. He wants to make feature films now."

Dobuzhinsky paused for a drag on his cigarette in the tired corridor. "He’s going broke doing it, no good will come of it. I could make him rich, he could make us rich, if he’d just give it up and come back to advertising."

In the meantime, it turns out Beky has shot the top two grossing Russian films, the vampire thrillers Dnevnoy Dozor and Nochnoy Dozor. And I imagine he was  well-paid for the rather silly Wanted. In Dobuzhinsky’s favour, he might have been right that Timur was a better commercials director than feature director. Bekmembetov has yet to shoot a film on the level of those Bank Imperial ads which took a second rate bank to the top of Russian consciousness. As far as I can tell, Bank Imperial doesn’t even exist anymore but their TVC’s will live on in eternity.

For that commercial, btw, I think we ended up getting Philip Yankovsky to helm. In the end, Philip has several rather better critically received feature films to his credit. It turns out even Dima is off making features these days.

In any case, thank you to Apple for uniting all the trailers for the Oscars (with links even to the independent and documentary trailers offsite) all together online. Slumdog Millionaire, Benjamin Button (for the F. Scott Fitzgeral connection), Revanche, Departures, The Baadhof Meinhof Complex, The Duchess, Frost/Nixon in roughly descending order are all on my wish list.

Ran into the lovely Flora who like me was at the Oscar party largely by accident to meet her friend Sophie who had spent the day watching four of the nominated films to be fully ready for the evening. Strangely, Sophie said, she didn’t feel at all tired. 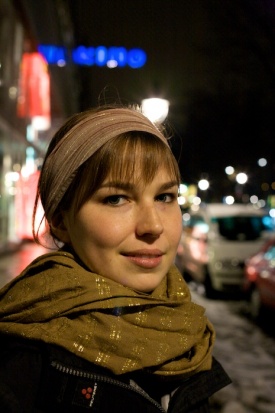 Flora with Gartenbaukino just behind her

We quietly talked politics and political film while everyone else placed their Oscar bets and left just before breakfast. Everyone should get the chance once in their life to talk about philosophy and Heidegger’s thought once in German. I’ve had mine now. It’s difficult to understand why Austrians would eat their dreadful white bread and semmel when they make such excellent dark and nut breads.

Speaking of Russia, I went for a walk after the Oscars. I wanted to grab a shot of the Russian Orthodox cathedral in Vienna while there was snow on the ground. It turns out the my 50mm lens wouldn’t manage to catch the snow, but I still got a good shot of the cathedral. 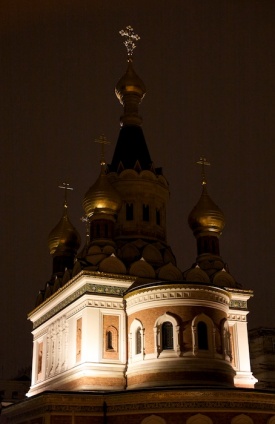 Moscow in Vienna – The Cathedral

Here’s the street – reminds one of Vienna’s past on the edge of the iron curtain and her more distant imperial charms. 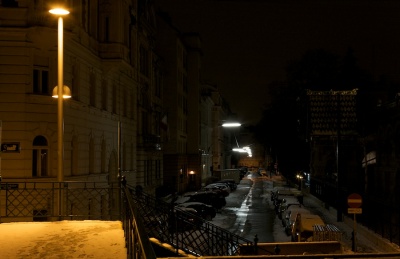 I’ve always wondered how and why the sidewalks of Vienna are always shovelled by morning. Wonder no longer. 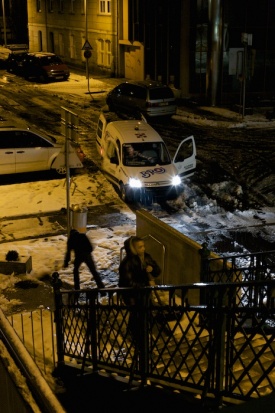 The snow brigade travels in packs in little white autos, like elves just in time to clear the sidewalks before sunrise. Vienna snow brigade – are the Elves happy?
I asked and they told me that it was a great job
and by daylight they are artists

Surely all of the above – in the space of just a few hours – are reasons enough to love Vienna.