American readers wrote in droves to Der Spiegel to express their outrage over German environmental minister Trittin’s admonition to the US government concerning the consequences of ignoring global warming (i.e. not signing Kyoto). 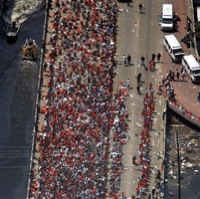 Prisoners held at gunpoint
on a broken bridge
under the open sun
without proper food or water supplies
and no toilet facilities. Reuters

When others in our world are in pain during/after a catastrophe, the citizens of the United States open their hearts and generously help. We send doctors and aid halfway around the world to ease their suffering.

To my knowledge, no country has yet to offer aid those affected by Katrina.

Thanks, European friends, for yet another kick in the groin. Four years ago, the European left blamed us for the September 11 attacks. The French think that China is less of a threat to world peace than the US is. And today we get these comments from the German left on the same day that a columnist in the Guardian argues that we “invented” Al Qaida as a “phantom” enemy.

It is hard for me to comprehend how, in the midst of Hurricane Katrina’s aftermath, a human tragedy of epic proportions, much of the world stands along the sidelines ready to criticize rather than assist materially in any significant way.

It’s not the American people’s fault that the storm hit and they couldn’t have stopped it. The Germans, on the other hand, could have done a lot to prevent World War II. And yet, care packages still rained down from US troops. Trittin’s know-it-all stance is therefore not only tasteless, it is also historically blind.

Surprisingly the current affairs editor of Der Spiegel is with them, even invoking Nazi ghosts.

Few in the world feel much compassion for a country which has sent the bulk of its National Guard (the heavy lifting for natural catastrophes like this) to wreak havoc and destruction on other sovereign nations under blatantly false pretenses (WMD).

The money spent on the firebombing of Falluja would have been more than enough to shore up New Orleans for all time.

Let’s have a look – our neighbour is a murderous robber with a leaky roof who spent his money on weapons instead of on reinforcing the shingles. A storm comes in while he is out of town stalking new victims. His roof blows off. Why would we come running to help him? No we don’t feel much desire to do this. Actually, we hope it serves as some kind of lesson to him to reform his ways.

We don’t have much (any) hope for the current administration or any of their associates. But perhaps the people will learn. Judging from the polemics above exculpating themselves for any blame for their inadequate preparation for the situation, I don’t hold out much hope.

Most unfortunately the real victims of this disaster are the poor and unprotected of America. But isn’t that always the way with the Americans? Indians, African-Americans, Palestinians, Iraqis – ride roughshod over them.

It is technically impossible for us to help these people trapped in perpetual poverty by their fellow countrymen – and something that American billionaires should be working on. On a per capita European countries do far more to help the economically disadvantaged countries than America.

A few people are asking the right questions:

On the whole the coverage of this is very telling. While over 600 people have tied in Iraq today, the focus continues to be on the southern US. I just wonder if it really is such a devastation, I mean the death toll will probably rise to 100-200 people, which is horrible. But, compared to other disastors is quite minimal. I wonder if the property distruction is what is most upsetting to our society? I wonder if we care more about the property, the oil infrastructure and the economy than the people?

You don’t need to wonder. While American patriots are beating their chests about the hard-hearted Europeans, Republican national leadership is sending out emails to encourage Senators to eliminate the estate tax. The money involved here is 400 billion dollars over ten years. Almost enough to pay for the Iraq war. Enough to rebuild New Orleans ten times over.

In his first interview after the flooding of New Orleans, Bush told ABC Television that he was first and foremost horrified by the law-breaking in the Louisiana capital.

I think there ought to be zero tolerance of people breaking the law during an emergency such as this, whether it be looting, or price-gouging at the gasoline pump or taking advantage of charitable giving, or insurance fraud.

The man is more concerned with petty theft, insurance companies and gasoline prices at a time like this. Compassion, understanding, solid priorities.

Personally I’m a little more worried about the 40% of homeowners whose are not covered for flood and who no longer have homes due to the negligence of the current administration (money allocated for reinforcing the levees was reallocated to the Iraq misadventure).