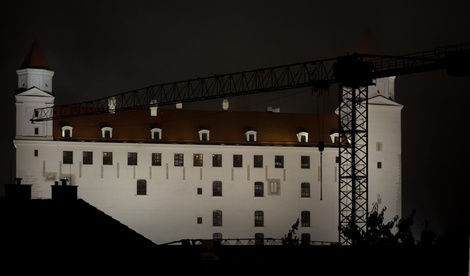 Little did I know just 18 hours later, the Euro was to fall under its watchful walls. Despite, Bratislava’s castle’s air of history, the castle was in ruins for over a hundred years in Pressburg before the Slovaks rebuilt it in Bratislava.

I’m still astonished that Radicova foolishly linked her government AGAIN (this is about time number five) to a vote in Parliament. While she has been a very good prime minister, this death wish in the form of votes of confidence is an absurd game of Russian roulette.

Well now we’ll have an election. Hopefully the bailout package will still not pass. This EU becomes troublesome: a plaything of the international banks, like Congress in the United States. The majority of the European population is against these unlimited bailouts.