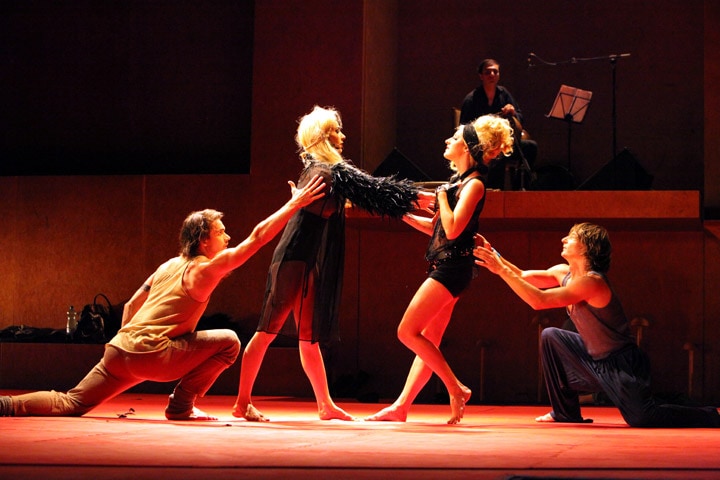 The stage is a wooden arena, with benches on all sides including one before the audience. Above the arena sits a drummer who immediately begins to beat a large skinned drum. Talented deep rhythms, slightly foreign to our ears.

A man in a blue martial arts costume stands in the center. Drift in various young men and women in combative poses. The fight begins.

Long bouts of shadow fighting eventually bring in some long legged blondes in the back to watch the combat (Marietta Kro, Lucia Patoprstá). The dojo atmosphere moves towards that of film noir. The long legged blondes end up in writhing embraces with bands our half naked fighters. Very sexy, moving us quickly towards B movies and Russ Meyer and Tarantino. 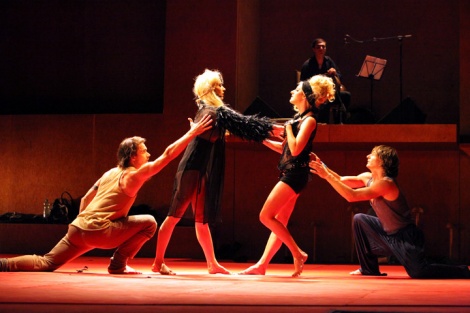 Group sex where one woman submits to multiple partners against her will appears to be a recurring them in Ulrich’s work. Lots more of it tonight. These fighters and ravishers carry around life size plush lions on their shoulders to amuser themselves between sexual assaults.

A lady in white enters with face hidden behind a wide brimmed hat, followed by the firsts man in a frightening wooden tribal mask. The first amazing dance of a man behind a mask follows. Flinging, lifts, flips. After a struggle nearly to the death an exhausted Fabrice Jucquois is revealed.

Our first clue as to the true nature of the evening has dropped. There is neither story here nor conventional characters. These figures on stage are symbols as in the Life of Man or Tsar Hunger of Leonid Andreyev or later the epic theatre of Berthold Brecht. Death, Life, Despair, Hunger, Desire. Nouns with capitals are come to reveal to us the meaning of life.

An enormous man in a death mask and dreadlocks follows the woman in white into the dojo. As a dreadlocked leather jacketed biker Wallace Jones gives the dance performance of the evening. The speed and grace and power of his long limbs terrorised the audience in his nightmare appearance. 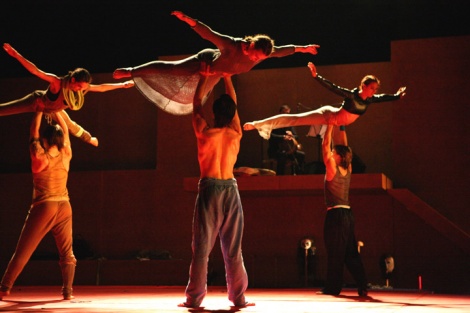 The next character still mystifies me. Mickey Mouse comes on stage. Yes, really, Disney’s guy, the one from the top of mother’s cookie jar from the fifties. Big ears, big eyes, big round smile. But Mickey’s spoiling for a fight tonight and he gets it.

On beat the drums boombity-boom-boom in the steady hands of Mohammad Rez Mortazavi an alternately spellbinding and oppressive rhythm.

We storm the boundary of kitsch here with the mouse and go right over the other side with our next warrior. A downhill skier complete with skis and tall boots. He trudges into the center of the fighting ring and then stops. It turns out there are dancing moves you can do only in ski boots and Emilijus Miliakus does a good job showing how you can lean further forward and back than humanly possible and writhe in spellbinding ways. He throws a woman or two over his head before finally Sterbová pulls the skis and boots from his feet.

At that point the other fighters gang up on Miliakus and beat him to death.

Martin Dvorak is a curious choice for the Master as Ulrich has more overtly charismatic dancers to carry this lead. But Anna Sterbová does great work as his apprentice who is regularly tossed into poses foreign to flesh and blood.

Irene Bauer provides an atmospheric shadow across the back of stage, head to toe in black chiffon. Sarah Deltenre is a convincingly macabre lady in white.

I thought Bauer and Deltenre were Death and Life but they turned out to be Day and Night.

Apparently this symbolic dance drama began with the work of a Persian poet who died about a thousand years ago, Rumi. Rumi’s full name is Jalāl ad-Dīn Muḥammad Balkhī. Rumi took his nickname from the part of Anatolia where he lives and which used to belong to Byzantium, aka Eastern Rome. In 2007, Unesco celebrated the year of Rumi, with international conferences with as many as 450 presentation. The guy is a big deal: think Persian Chaucer or at least William Wordsworth.

There’s nothing in his writings to suggest a martial nature or a fascination with combat. Rumi was more into long walks and philosophical talks. His idea of love seems to have been more Platonic than consumed with trashy blondes and group sex.

Once again with Ulrich’s work, we are left more impressed with the strength of the conception and the musical choice and performance than the choreography. Nearly two hours of live drums is an impressive sonic experience. The musical score and the performance are the work of a handsome young Persian musician, Mohammad Reza Mortazavi. His stamina and energy delighted both dancers and audience.

The choreography is more focused than Ulrich’s preceding piece Winterreise: the combat area engendered a string of dance and movement events. As well as the action on the center stage also background notes which appear and reappear. Bauer as the night goes up and down the stairs and brings Mortazavi more into the performance. The other fighters/disciples remain on the stage actively observing the action when not participating.

Simon Corder’s lighting is more consistently detailed than the lighting in Winterreise. Again, the tones tend towards the strong, apparently a consequence of the planned outdoor performanes of Rummi in Flammen. In open air, the dojo is to be placed among the spectators and the dancers will circulate freely in the audience.

Rumi in Flammen will be even more effective with the dancers among the audience. It still won’t have much to do Rumi’s poetry and will owe more to B movies than Persian literature, but can survive on its own merits. If Ulrich has managed to expose Jalāl ad-Dīn Muḥammad Balkhī’s work and Persian literature to more Austrians, his appropriation of Rumi’s name will have done no harm and much good.

Regardless of what the rest of the world and modern Persia may think of Rumi in Flammen at its premiere, Linz stood and applauded Ulrich and Mortazavi’s work for over fifteen minutes of curtain calls.

More info about Jochen Ulrich’s Rumi in Flammen, more photographs and tickets can be found on the website of Landestheater Linz. Photos courtesy of Landestheater Linz (uncredited). Do not miss the open air performance on July 2 on the  MainDeck of the Ars Electronica Center (July 3 in case of rain).