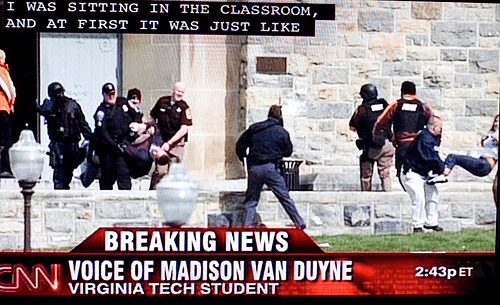 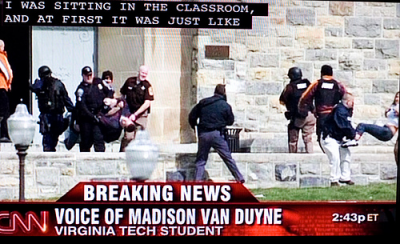 Another shooting tragedy in an American educational institution. What is wrong with Americans? Can they not see that loose access to firearms kills? It seems Americans will never learn. G.W. Bush’s first official reaction was to defend free access to handguns:

The president believes that there is a right for people to bear arms, but that all laws must be followed.

Tell your concerns to the madman with a gun in his hand, Mr. Bush. While the bodies are still warm, right wing web pundit Glenn Reynolds opines that even less restrictive gun laws would have saved lives in Virginia.

These things do seem to take place in locations where it’s not legal for people with carry permits to carry guns, though, and I believe that’s the case where the Virginia Tech campus is concerned. I certainly wish that someone had been in a position to shoot this guy at the outset…

Another American takes Glenn Reynolds hypothesis to its logical conclusion. The consequences are frightening:

Not that I want to dive into the politics of this right away, either, but GR’s point is idiotic – there are SO many reasons you wouldn’t want the students to be carrying guns. If the law-abiding student failed to take down the attacker, the attacker would now have an additional firearm – and no real need to reload. Furthermore, picture an entire campus loaded with armed students. Once the first shots go off, you would potentially have dozens of students waving guns in the hall. They’d be just as likely to open fire on each other than on the actual murderer, not to mention all the additional people who could die in the crossfire. Also, the police would have a horrible, horrible time trying to separate friend from foe. This oversimplified “if everyone had guns, this wouldn’t have happened” attitude is terribly wrong.

Basically the more guns on hand, the worse a blood bath would be.

Firearms result in deaths from domestic violence (in this case as well) and facilitate murderous rampages by crazed people.

It’s all well and good to say people should not ever be crazed. But it happens. One cannot outlaw human nature.

When there are no guns handy, your crazed person has limited access to weapons of immediate destruction. He or she can only grab an automobile and ram into somebody else (a few dead at worse). He or she might come after people with a knife or an axe. Neither of those variants will result in anything like the death toll of a crazed person with a firearm. 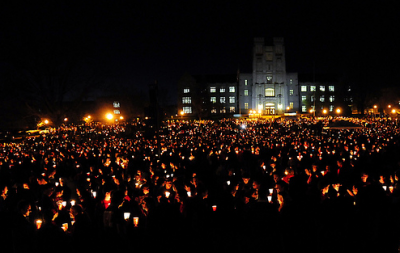 The NRA argument that the right to bear arms protects the population of the United States from military dictatorship was preposterous from the beginning and has since been proven wrong.

In any case, the military dictatorship has much bigger guns now. They have tanks, APC, grenade launchers, sonic blasters and war planes. What do they care about a few disgruntled citizens with pistols. It just gives the government an excuse to shoot dissenters dead rather than have to imprison and try them in an open court of law.

According to the philosophy behind the original right to bear arms, Americans should be encouraging people to own their own tanks and warplanes, to protect themselves from tyranny. Anything less defeats the purpose of the right.

The politically correct thing to say here would be to express grief for the fallen. Still, it’s difficult when their elected leaders continue to support the policies. Something like feeling empathy for the chronic drunk driver whose ran over his own child while intoxicated at the wheel. Stop drinking and driving!

The American "liberation" of Iraq has resulted in daily death counts from Baghdad as high as those of this particular tragedy.

I don’t and won’t buy into the xenophobic and diabolical belief that American or British or Israeli lives are somehow more sacrosanct than those of other peoples, whether Iraqi, Palestinian or African.

So given the daily death toll in Iraq, I can’t count this day as any more tragic than another, apart from Americans unrelenting stupidity about gun control