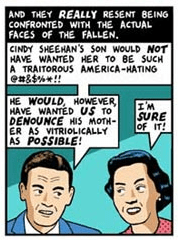 Speaking for the Dead | Tom Tomorrow 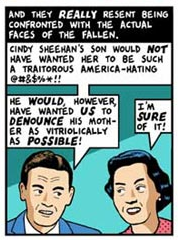 Tom Tomorrow’s cartoon this week is not to be missed. If you’re not already acquainted with his work, Tom Tomorrow is the most delightful skewer of right wing hypocrisy, this side of Billmon who has a more serious take on Republican hypocrisy regarding the fallen dead and the Cindy Sheehan situation.

If this delightful and frank woman succeeds in toppling Nero’s regime, there may be less shame in being American. At least one person has really stood up and said, I’m mad as hell and I won’t take it anymore.