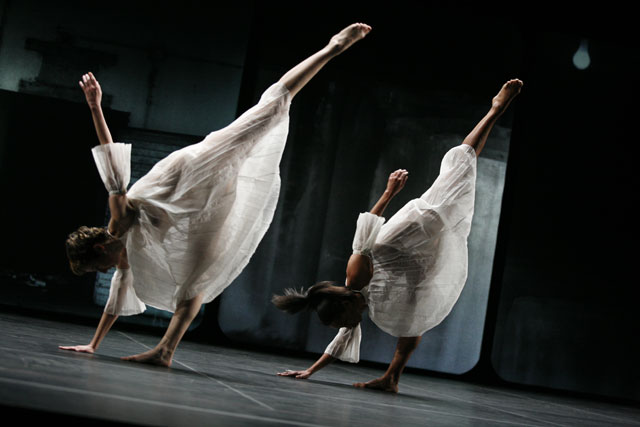 New Year’s eve at Palais Garnier is a marvelous event. One comes in black tie and enjoys complimentary champagne and hors d’oeuvres with the ballet.

The dance on the programme was the baroque event of the Opèra de Paris season.

The evening began rather slowly with Bach-Suite 2, a creation of Francine Lancelot and Kader Belarbi on J.S. Bach’s Suite No. 3 for cello in G major, based on Rudolf Noureev’s Bach-Suite (1984).

Belarbi’s structured dance to Bach’s baroque score is correct, historic and vaguely charming. Belarbi was attired in a shiny purple frock coat in the baroque style and he skipped and jumped and leaped. However a man prancing alone in most cases remains a man alone on stage. And in tonight’s performance that’s exactly what happened.

The highlight was the cello solo performed admirably by Raphaël Pidoux who joined us on the left hand of the stage.

After the first entre-acte we returned to a bare stage with only a background of three white panels. On each of the panels a photograph was projected as a dancer slipped in and out from each side of the stage. 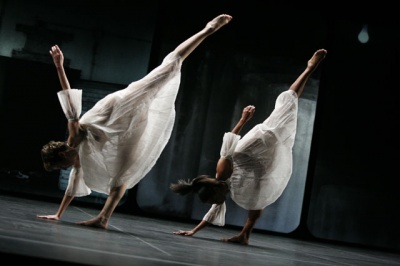 The performance was smooth and certain. Almost effortless for the five Paris Opera danseuses, Géraldine Wiart, Muriel Zusperreguy, Béatrice Martel, Aurélia Bellet and Alice Renavand. One might say that their performance is missing a certain recklessness or carelessness that one can imagine in the original American dancers.

But the dancers were stunning in the translucent long white gowns as they came and went as ghosts. 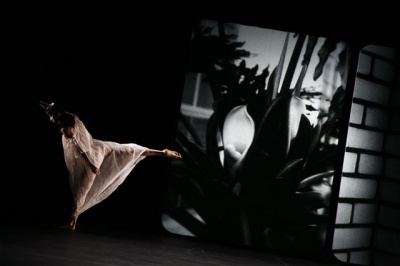 A pity that the projectors were so noisy as the mechanical sound of the pictures changing rather distracted from the ethereal atmosphere of the gowns and the choreography.

When the lights came up for O zlozony / O composite, we faced a starry sky projected on a 10 metre high backdrop. Three white clad figures moved about the stage to a woman’s whisper in an obscure and delicious Slavic tongue. The music was very zen – almost too much so – but lifted from repetitiveness by the gorgeous spoken vocals.

The music belonged Laurie Andersen and the choreography again to Trisha Brown, but this time in a more recent commission in a creation made specifically for the Opèra de Paris in only its eleventh performance.

The three performers – Dorothée Gilbert, Nicolas Le Riche and Yann Bridard – were attired in strange curved white costumes, a combination of Barbarella and 2001: A Space Odyssey – modernistic but somehow timeless. 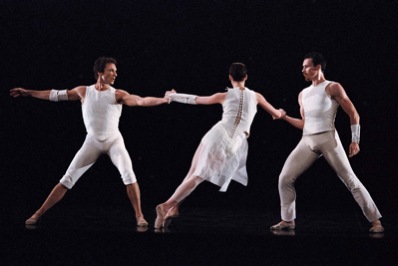 Nicolas Le Riche is a man in his full maturity, with full lines rather than youthful ones that leave a sense of hidden power like a panther. Powerful and flowing arms. Le Riche dominated the other two. Despite the omnipresent female vocals, a strangely bland dance role for the woman. No real dancing, just lifted and twisted and turned.

The kind of piece you’d like to be able to sit down and watch sometimes before bed to put you in a good mood, dreamy and reflective for a blissful night of repose and meditation.

After the second entre acte we returned for what is supposed to be the highlight of the programme, William Forsythe’s Pas./Parts created for the Ballet de l’Opèra de Paris in March 1999. 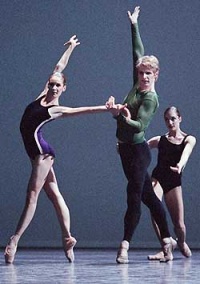 The strong industrial sounds of Thom Willems score syncopate the dance at first, galvanizing the audience. Sadly after a while they become tired. Perhaps too much post modern clanging on stages around the world. Clanging does not make much of a thirty five minute score.

Here there are up to twenty dancers on the stage at any one time. Again the range and breadth of Opèra dancers impress. Forsythe’s choreography for the men and women is very similar but for some reason looked much better on the women. Too stiff on the men.

Sabrina Mallem was particularly impressive with arms that seemed longer than even her legs, both supple and powerful. Totally expressive from head to toe to fingertip, she filled the entire stage with resolute and poetic extensions. The strength of her body expressed itself in the beautiful and rounded curves of her shoulders and hips.

On the other hand, the other lead, Mélanie Hurel, while she danced well, looked so thin that she might be staggering out of prisoner-of-war camp, gaunt and miserable. This is the downside of the Opèra de Paris is that many of the danseuses are so thin as to look outright ill.

While some may find this aesthetically inspiring, I find it depressing to see people who frankly look only ill peforming on stage.

Pas./Parts while it had its moments, dragged at times and sank under the repetitive and unpleasant score. What was said musically and choreographically could have been condensed into fifteen or twenty minutes rather than thirty-five.

Overall, though, a wonderful and varied program, with a single unique and original piece in Trisha Brown’s O zlozony / O composite.