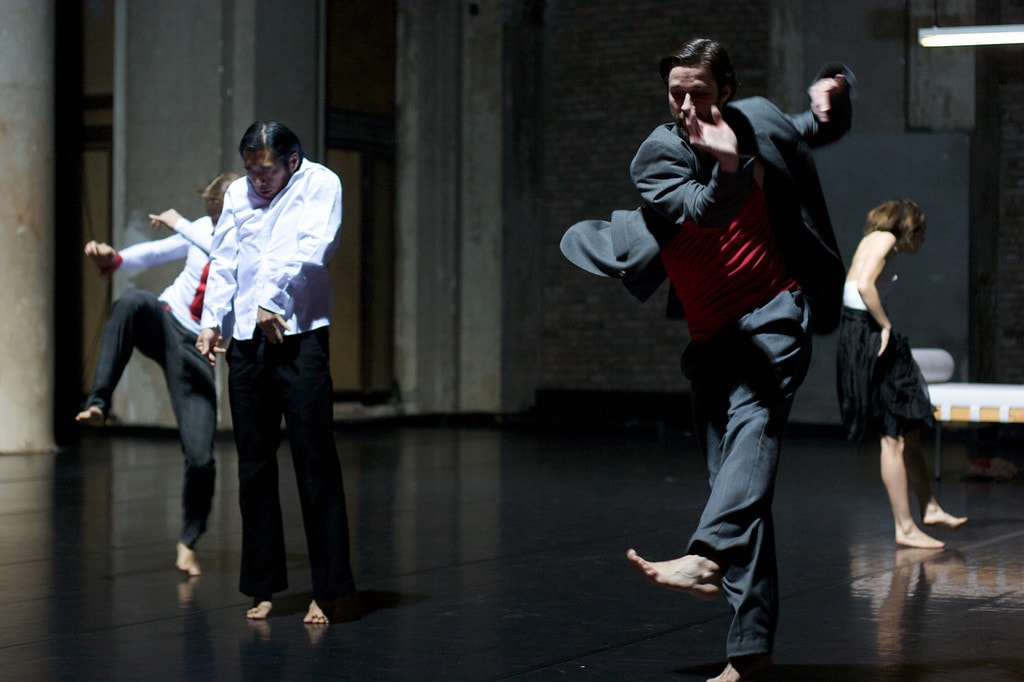 Seven Features of the Perfect Camera for Dance Photography

I’ve just shot quite a brilliant show – Nikolaus Adler’s Oedipus is Complex. I got some good shots but I missed a lot of the most powerful sections while shooting. Was I not paying attention? No, I was paying very close attention and watching my shots go by while withholding fire. 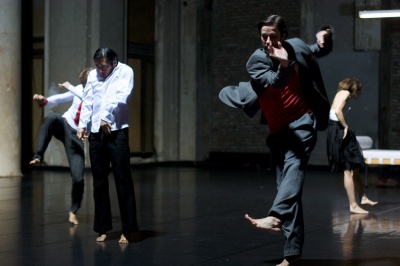 Shutter noise. Oedipus is Complex was a live event and my friend Jörg was shooting a film version. So what we agreed with producer Nicolaus Selimov was:

And following this prescription:

But I did miss a lot of the strongest emotional moments with the performer alone on stage. And some of the sections which I do have could be even better (but I had a choice of three images instead of ten).

So both inspired and frustrated by this evening I went camera browsing for the first time in a couple of years (I’ve been very happy with my 20D, particularly since I put the Canon 50 MM F1.4 on it). I started by making a checklist for the perfect camera for dance photography:

Here are the camera requirements for dance (or classical concert) photography in order of priority:

There’s a lot of excitement out there in the photographic world about the just released Canon 5D Mark II. A lot of tests remain to be done, but what’s clear at this point:

Some people are complaining about the slow FPS, but frankly 4 FPS is just fine in dance or concert photography for a photographer who is timing his shots. If you’re not timing your shots, you’re a photojournalist shooting arts and not an arts photographer. Moreover you can’t even use the 4 fps and most dance events as rapid fire burts are just not acceptable except at the highest musical crescendos.

While my current camera – the Canon 20D – is the loudest Canon DSLR out there, apparently Nikons make an even greater racket.

Which makes the otherwise very attractive D700 (great high ISO up to 8000, wonderful autofocus) a non-starter.

Panasonic is coming on strong with their DMC-G1 which gives up the optical view finder for an EVF (electrical viewfinder) and hence has no mirror slap. But the G1 falls down on two criteria:

I think here is an area that Pentax and Samsung could steal a march on Nikon and Canon (who are unlikely to make a version of their cameras without optical viewfinder anytime soon. Pentax has the lenses to make a go of a non reflex digital changeable lens camera – the silent camera. Sony is in a similar position and had a near miss with the performance crippled but otherwise quite brilliant R1 (9 seconds to write a single raw image to the memory card? – that is not burst performance even I could live with).

Strangely what might be the best dance camera out there is also a Panasonic but a pocket camera. The Panasonic DMC LX-3 boasts:

The other advantage that an LX3 holds is that you can have it with you all the time. I’d still be two stops shy of what I can do with my current setup (20D with Canon 50mm 1.4). Now I can shoot at F 2.2 at 80mm equivalent at ISO 1600. On the other hand, most of the time I can’t shoot at all as the noise of the camera angers anyone in the vicinity and gets a ban.

And an LX-3 in the pocket would mean I could finally retire my wonderful Canon Powershot S45 (one of the last models with raw) for a camera a little bit smaller but with much better high ISO performance.

Basically the LX3 is not really a dance photographer’s instrument as much as a dance critic’s friend. With permission one can get the shots one needs to illustrate one’s articles. The LX3 is also relatively inexpensive. The camera costs about the same as a single decent lens ($500) and you don’t need anything extra apart from a second battery.

I had a similar camera before, the Panasonic DMC-FZ10. While the FZ10 was crippled with poor high ISO an slow autofocus and had no RAW, due to its silence I was able to do some of my best dance photography just due to the superb lens (35-420MM F2.8 constant) and silent operation (I could shoot as much as I liked but after the performance the lady-balletomane who complained about the camera before the performance thanked me afterwards – she hadn’t been bothered at all by my picture taking).

I don’t know if I will bother with an LX-3 as it won’t let me take better pictures than I can can now. But I am waiting for the silent APS-C or 35MM sized sensor camera body with an EVF which will accept first rate 35mm lenses from any of the mount families (Canon, Nikon, Pentax, Sony/Minolta – with a preference for Pentax or Canon as I already own good glass). My preorder is in for whoever builds it first.

In the meantime, I don’t think I will change my Canon 20D for another DSLR. Whatever I buy will still suffer the same principal issue – shutter noise. My photographs are not limited by ISO or image size or even focus at this point. Silence would be golden.