The opening piece Slovanské Dvojspevy (Slavonic Duets: Czech choreographer Libor Vaculik) tells a playful tale of Slovak courtship. The long white skirts and the white shirts of the men gave the stage the lightness of spring and early summer. The music is much heavier though Antonin Dvorak’s Slovak Dances opus 46 and 72 and one of the Moravian dances too). Sadly the sound system in Novaj Tsena is simply not adequate for classical music: played too loud Dvorak descends into cacophony.

While on the subject of the theatre the stage seems too small as well for this piece. With ten dancers forming two groups at the same time, you did not have the feeling of observing Slovak courtship rituals in fields or the countryside but rather a kind of back urban alleys version. Basically, too much furniture in a room. Whether Slavonic Duets would be any better on a larger stage is an open question: I believe a catastrophic Ivan the Terrible I once saw in the SND was also the creation of Libor Vaculik.

The performances were evenly adequate with one exception: Klaudia Bitterová stood out for her radiance, her poise and the lyricality of her movements. There was no Katarina Kosiková to share the stage with and Bitterová took full advantage of her opportunity to shine. Andrej Szabo as the lead among the men presented himself an ideal partner to Bitterová.

Balet Bratislava’s premiere of Romeo and Juliet yesterday in Bratislava started the company’s performances off very well. A delighted public. Here are some photos to whet your appetite. Review to follow tomorrow. 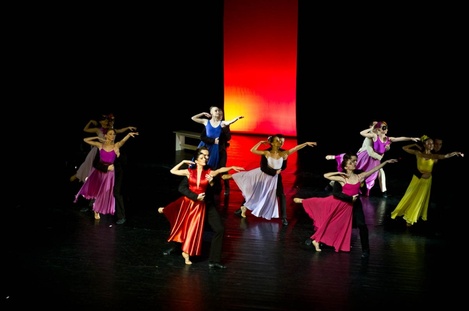